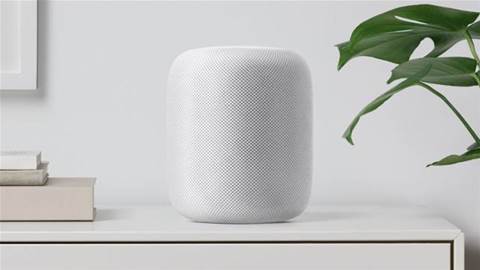 We’ve just had our first encounter with the Apple's smart speaker and we’re very impressed indeed.

’Tis the season for new smart speakers, it seems, with Amazon finally launching its Echo in Australia, Sonos also getting in on the act, and Apple about to release its HomePod. Google Home, of course, was first to our market last year.

So, the competition is hotting up now, with the HomePod available for pre-order now and due to be shipped from 9 February, according to Apple.

How does it compare with the others? We’ve reviewed the Google Home and Amazon Echo 2 and Echo Plus previously – and we’ll get to the Sonos One soon – but first, here are our first impressions of the Apple HomePod. This is not a full review – we’ll do that when we’ve spent more time with it – but we had darned good play with it at a recent Apple briefing and, so far, we’re impressed.

Admittedly, the demonstration was stage-managed but we had the chance to have an extended listen to the speaker in a number of different environments: a living room, small office and kitchen and compare it with a number of rivals and thus far, the HomePod looks like a winner.

This is mainly due to how good it sounds and there are a number of factors contributing to this. The first is that the HomePod can adapt automatically to its surroundings using its speakers and microphones to automatically scan its surrounds to find out whether it's on a shelf, in a corner or on a table in the middle of a room.

Mostly, though, it's due to the driver setup inside the HomePod’s softly curved, 7in tall cloth-covered exterior. At the top of the speaker’s housing is a high-excursion, upwards-firing 4in woofer, which is responsible for reproducing the bass and mid tones, while an array of seven tweeters surrounds the base of the speaker in a ring. The HomePod’s microphones, of which there are six, all arranged around the speaker’s middle. 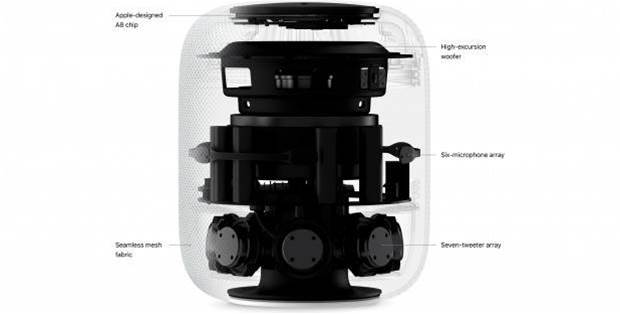 Just as with the Amazon Echo range of speakers, these are capable of picking up the speaker’s wake phrase – “Hey Siri” – from across the room and even when music is playing quite loudly.

This driver setup produces a sound that’s truly impressive for a speaker this small. In the mids and high notes, there’s a crisp sweetness to audio reproduction that most small speakers struggle to reproduce. It’s perhaps not as warm in the mids as we’d like it to be, but the demo was held in a rather bare, modern apartment, so we’d expect a certain brightness to be added by the lack of soft furnishing.

What was most impressive about the HomePod, however, was the amount of bass it was capable of kicking out. And not just the power of it – although that was impressive – but the muscularity of the bass and the quality of it. In back-to-back tests, where we were played the same tracks on “volume leveled” Amazon Echo 2, Sonos One, Harman-Kardon Allure and Apple HomePod speakers, the Apple HomePod won hands down.

It sounded sweeter, with better instrument separation, a wider soundstage and better bass and it wasn’t a fair fight, with only the Harman-Kardon getting close.

Now, this demo was clearly carefully set up to show off the HomePod at its best, but the differences were so noticeable that we think it’s highly likely that the HomePod will the best-sounding smart speaker available – though we’ll confirm that when we get the chance to test them all together.

This isn’t just a speaker for music, though. It’s intended to take on the best Amazon has to offer in the smart speaker arena as well and I got to see the best of aspects of this in action at the preview, too.

Again, I’ll report back fully when I’ve had the chance to put the speaker through its paces but at the demo event, everything went swimmingly. The microphone array was able to pick up voice commands even with the music turned up to room-filling volumes. The things it can do, especially when associated with an Apple Music account, are pretty impressive, too, particularly the way you can ask, for instance, about what’s playing right now.

You can ask Siri who the drummer is, for more information about the album or even the producer. It’s possible to ask the HomePod to play more tracks like the one you’re listening to, different versions of it or something completely different. These are capabilities missing from Amazon’s Echo speakers which won’t even let you “play it again” if you choose not to use Amazon Music.

And setup is typical Apple as well. It works, just like AirPods and recent Beats headphones, by simply holding your iPhone near the speaker, at which point you get a popup and a run through of various terms and conditions. And, if you don't have an Apple Music account, don't worry, the speaker supports AirPlay 1 so any app that can currently target an Airplay-compatible speaker (say, Spotify and YouTube) will work with the HomePod.

What the speaker doesn’t do is work with multiple Apple IDs or multiple Apple Music accounts. Although you can use it without your phone being present, you can’t switch accounts, which could be a problem if the little people in the house insist on listening to “Pink Fluffy Unicorns Dancing on Rainbows” on repeat when you’re not at home. Fortunately, you can prevent this from influencing your music recommendations via Apple Music by flicking a switch in the settings on your iPhone.

Otherwise, the spec sheet of smart-speaker capabilities looks pretty familiar. We was shown the HomePod reading out the news (and you can choose the source), advising on traffic conditions on the daily commute and carrying out various actions with a single trigger phrase. “Hey Siri, good morning” triggered a “Scene” that turned on the kitchen lights and started the kettle boiling; just like Amazon’s Routines feature. 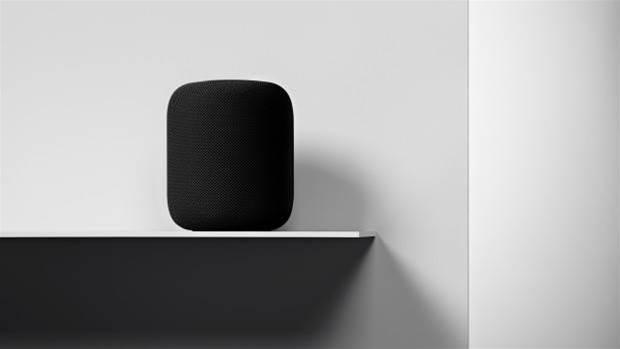 There are a couple of areas where the HomePod is a little smarter than Amazon’s Echo devices, however. One is location awareness. Set the speaker’s location to Office, or Kitchen and other HomeKit gear with the same assigned location will respond without you having to append the location. “Hey Siri, turn on the lights”, for instance, will switch on all the smart lights in the room the speaker is in.

The other is the ability to pair two HomePods and listen to music in stereo. Now, this isn't a feature that will be enabled when the HomePod is first released. It's coming in a software update later on in 2018 but we were given a sneak preview of two HomePods playing music in stereo and, brief though the demo was, adding a second HomePod did broaden the soundstage considerably. Buying two HomePods will also make a double-size hole in your bank account, of course.

Of course, we can’t provide a full verdict on the Apple HomePod from a demo in stage-managed environment, but so far it’s shaping up very nicely indeed. It sounds great, looks like it’s as responsive to voice commands as Amazon’s speakers and has a decent range of smart capabilities, some of which outstrip its rivals’.

Mind you, it will have to be significantly better than its competitors, because it’s priced at $499 – more than double Google Home and Amazon Echo 2.

And with a product like the HomePod, the true test will be living with it for a period of time. Will it perform as well in a noisy family living room or kitchen? Will Siri be better than Alexa at answering kids’ random questions? We’ll answer these questions after we’ve thoroughly tested it under our regular conditions.