Android Wear comes to the iPhone (sort of). What does this mean? 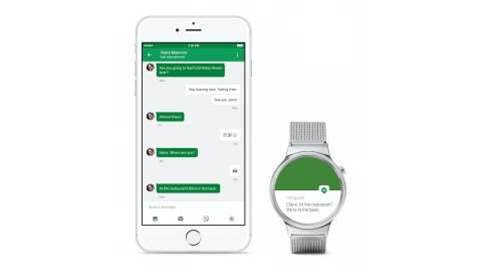 You'll now be able to use the LG Watch Urbane and forthcoming Android Wear devices with an iPhone. But there's a catch

The Apple Watch just got company. In an announcement yesterday, Google revealed that Android Wear is now available for the iPhone – and it's going to shake up the smartwatch market.

The new Android Wear for iOS app is already available, and Google says it's compatible with the following iPhones – as long as they're running iOS 8.2 or later:

Google says the functionality is currently only available with the LG Watch Urbane and forthcoming watches from Huawei, Asus and more. However, The Verge has noted that updating the unsupported Moto 360 to the latest firmware also allows it to pair with the iPhone.

Google says that the app provides iPhone users with similar functionality to the full Android experience: iPhone owners will be able to receive information at a glance, keeping them up to date with a range of notifications – from calls to emails and text messages.

Users will be able to create events, set reminders and check the weather, simply by saying “Okay Google”

Significantly, the app also comes with Google Now included – the search giant's digital assistant and rival to Siri. That means users will be able to create events, set reminders and check the weather, simply by saying “Okay Google.”

While Google has brought the core functionality of Android Wear to iPhone owners, a significant portion has been left out. Apple's closed ecosystem prevents referral to other third-party stores, and that means iPhone owners won't have access to third party apps – but can use selected third-party watch faces. When you consider how much value the app store adds to the Apple Watch, it's a critical omission for the app.

What's in it for Google?

Android Wear for iOS will provide no revenue for Google, but the decision to bring it to iPhone users is a calculated move. Despite its stripped-back functionality, Android Wear in its “vanilla” form still offers an impressive user experience, and aspects of it are arguably better than Apple's watch OS 2.

While Android Wear for iOS packs in a good range of features, it also omits just enough to make users consider switching to an all Android setup

Bringing Android Wear to iPhone has the same impact as introducing any third-party software to a rival device. Like the Google Maps app before it, Android Wear for iOS allows Google to promote its brand and services on a rival platform.

While Android Wear for iOS packs in a good range of features, it also omits just enough to make users consider switching to an all Android setup.

Lastly, Android Wear is also about user information. While the app itself may not generate revenue, the information that every additional Android Wear user represents will benefit Google in the long run.

The biggest victim of the move is the Apple Watch. Up until now, the wearable had enjoyed exclusive status as the only mainstream smartwatch available for iPhone users, but Android Wear for iOS changes all that.The Apple Watch previously competed against traditional watches, but now it's up against a range of Android Wear products, with a vast spectrum of price points.

In addition, it also means Apple may need to focus harder on the “headline specifications” of the next Apple Watch, as iPhone users will look to compare their wearable options. Apple will be counting on brand loyalty, App Store access and a strong ecosystem to attract iPhone users over to the Apple Watch.

What's more, the traffic could be two-way. Although it probably only accounts for a small percentage of users, those with Android Wear watches may now consider buying an iPhone 6s as their next smartphone.

Google's decision to bring Android Wear to iOS won't affect the majority of Samsung's smartwatches, as they use the company's own proprietary Tizen-based software.

While there are no plans to bring Gear to iOS yet, the company should follow Google's lead. With the extremely impressive Samsung Gear S2 on the horizon, it would give the Apple Watch some real competition.

I have read and accept the privacy policy and terms and conditions and by submitting my email address I agree to receive the Business IT newsletter and receive special offers on behalf of Business IT, nextmedia and its valued partners. We will not share your details with third parties.
Copyright © Alphr, Dennis Publishing
Tags:
android wear apple watch google lg watch urbane software the apple watch
By a Staff Writer
Sep 2 2015
11:36AM