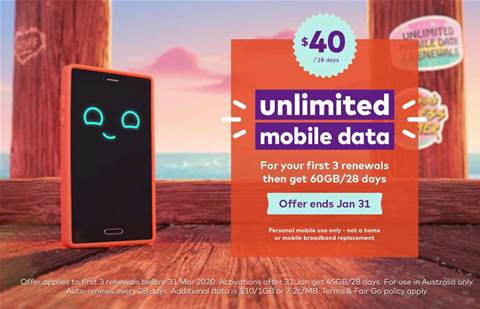 Amaysim, Lycamobile pulled up over use of the word "unlimited".

Mobile carriers Amaysim Australia and Lycamobile have paid more than $130,000 in penalties following infringements from the Australian Competition and Consumer Commission for allegedly misleading customers about their mobile phone plans.

Amaysim copped the bigger hit of the two telcos, paying $126,000 while Lycamobile was charged $12,600, for what the consumer watchdog alleged was a misrepresentation of the word “unlimited” in their advertisements on social media.

The ACCC said despite the carriers advertising their plans were unlimited, the plans in question did have a maximum data allowance.

An Amaysim ad in dispute, posted to Twitter, carried the statement ‘…your mother loves the Unlimited Mobile Data offer from amaysim’ along with the hashtag #UnlimitedMobileData. The ACCC reports that the plan only provided an unlimited data allowance for the first three renewals, after which it would revert to a capped amount.

In the case of Lycamobile, it published an advert on its Facebook page which referred to ‘Unlimited Plan S’ and ‘Unlimited Plan M’, each of which had a capped data allowance despite representing to customers otherwise, according to the ACCC.

“Consumers who saw the word ‘unlimited’ in the advertisements without any explanation of the limits of the plans were likely to expect they would not be charged additional fees for mobile data, no matter how much data they used,” Sims said.

“The telco industry has been previously put on notice that their advertisements must be clear and transparent, and must not contain claims like ‘unlimited’ without a clear and prominent disclosure of any qualification or exception which applies to the offer. We will continue to monitor mobile plan advertisements and won’t hesitate to enforce the law.

“The amount of data included in a mobile phone plan is an important factor for many consumers in choosing a plan, and it is important that consumers can readily understand what they are signing up to.”