All these Windows 8 tablets look great, but don’t forget this… 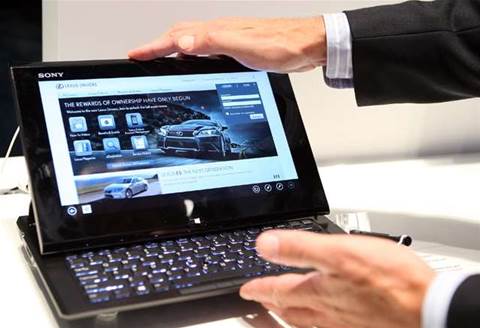 Opinion: Why you should tread carefully when it comes to the new generation of Windows 8 devices.

The next time you go shopping for a new laptop or tablet you'll be looking at a new breed of “hybrid” Windows laptops – laptops and tablets in one. Pop the keyboard off, and you’ve got a tablet to tuck under your arm.

Overnight, the rug came off a bunch of these new Windows 8 computers. Everything from the ASUS ViVO Tab RT, a tablet with a 10in screen that works with a special Wacom pen, to the Samsung ATIV Smart PC Pro, with an 11.6in screen and a chip as fast as many other full-blown laptops.

If you use your Windows laptop for work, running Excel spreadsheets, emailing suppliers and so on, is there a benefit in switching to one of these fancy hybrid models in the future?

Let’s deal with the upsides first. First off, these machines can be light (520g in one case), which certainly beats some of the 15in laptops we’ve used (some which have felt like bricks).

You also get Windows 8 – in a nutshell, the new tile home screen and touch-friendly apps make Windows much better than it ever was for tablets. Couple that with the fact that you can use all the Windows programs you need for work (though you’ll need to be running the full-blown version of Windows 8, not the version called Windows RT) and it’s going to be a no-brainer for some people. We recommend you read the article we wrote here about the risks vs rewards of using Windows 8 for your work.

Some of these tablets will be as powerful as some “regular” laptops you’ve been used to. For example, the Samsung ATIV Smart PC Pro which has an Intel Core i5 CPU. This means they are fully capable of running big, complicated spreadsheets, several memory and processor intensive programs at once – we expect machines of this calibre might be capable of editing high resolution images in Photoshop while doing other jobs, for example.

There are pros and cons of moving to Windows 8 for work, though – not least the fact that it will take a bit of getting used to. Read the article we linked above for more on this.

There is something else important to keep in mind – all the choice you’ll have. Once Windows 8 goes on sale in a few months, prepare to see dozens of Windows 8 laptops and tablets like the ones you see above.

It means you’ll have computers of various shapes and sizes to choose from - “hybrid” tablets as well as “regular-looking” (for want of a better term) laptops that now have touchscreens, like the HP Spectre XT.

This choice is great, but we hope it doesn’t mean a return to the days when some laptops were excellent and others were awful.

For a few years now it’s been getting harder to buy a really, really slow laptop. Sure, some look awful, but for the most part they’re much faster for the money (Windows 7 helps).

This wasn’t always the case. There was a time after Windows Vista came in that buying cheap was a bit of a gamble if you didn’t know which CPU was which. We know of at least one friend that had to retire a new laptop because it just too slow to be useful. You might also remember netbooks, which were nice and small, but only good for basic jobs.

Less powerful laptops are still around, but unless you’re buying really cheap, or you’re just unlucky, you probably won’t encounter them (we say probably, because there’s always a few bad experiences out there).

But with Windows 8, you’re going to see everything from these “hybrid” machines with full-blown laptop performance, to machines with an Atom CPU. Atom will give better battery life, but it won’t give you anywhere near the same performance for complex tasks.

The ASUS ViVo Tab will run the full version of Windows 8, using an Atom chip. That worries us a bit.

We’re not saying Atom will be a bad choice. It might make a great choice if all you need is a tablet for basic emailing and spreadsheets. And that’s the point – there will be lots of new tablet-friendly apps that won’t require powerful computers.

We’re yet to test an Atom machine running Windows 8, so we’re not making any judgements about it. All we’re saying is we’ve been burnt before – sometimes people forget about the hardware and focus on the price. It’s happened before with netbooks.

We welcome the chance to be proven wrong this time.