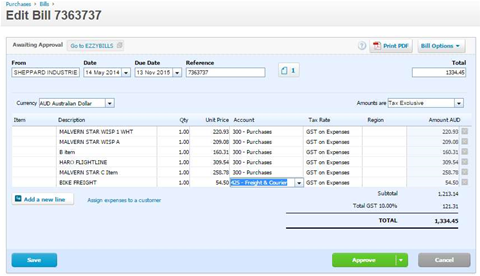 Sick of manually keying in your invoices? Australian startup EzzyBills says it can automate the process.

If you have a glovebox or desk draw full of paper invoices, manually keying them all in to your accounting system can be a time-consuming and tedious chore – and that’s before you have to put in all those GL codes.

While there are services like Receipt Bank that allow you to outsource the task, the information on many of these services is manually entered, meaning it can take up to 72 hours for the data to end up in your accounting package.

The service is reasonably priced – a one year subscription costs $100 for up to 1000 invoices – and includes a simple drag-and-drop interface.

“We saw there was a need for invoice processing that happens straight away, without waiting eight hours, 12 hours, or a whole day for a solution,” EzzyBills founder Michael Fitzmaurice told BIT.

“There are solutions out there in the marketplace where people will upload their invoices, and then there will be a sweatshop somewhere that will look at the invoices and then manually put that data in, and then upload that to Xero.

“What we were hearing from accountants is that it could take a day or longer. For people who run businesses, they generally have a day where they do all their invoices. So there was a need for a solution like this.”

How the automation works

While the failings of most OCR software will be well known to anyone who has ever tried using a scanner, Fitzmaurice says that EzzyBills' system is significantly better than the free software that comes with most scanners, and in addition, he has created algorithms that check for many of the common OCR errors.

“The failing of OCR engines is often around item codes where there can be an ‘o’ instead of a zero and things like that. But we know to check for that. We work with what the OCR engines produce, and then try to use that data to see if there’s an error in the data and try to correct it that way,” he said. Part of this error correction process is extracting a whole table of data, rather than just the totals, and then recalculating the totals.

“We extract the table data and the totals, and that gives us the ability to compare the data in the table against the totals. It also allows us to work out whether the totals are correct or not correct, and we have lots of different algorithms looking at a variety of numbers,” Fitzmaurice said.

“By validating against the table and the headers, and looking at the whole column for the totals and adding them all up, that allows you to improve the extraction.”

The EzzyBills system further automates the process by cross-referencing the scanned data against information already in Xero or MYOB.

“By being able to look at the invoice history, you’re able to work out how to GL-code the invoice, payment terms, who the supplier is – you can work all that out in real time. Before that, you didn’t have the information and the data – it wasn’t in real time. So that’s made these types of solutions possible,” Fitzmaurice said.

This combination of full-table extraction and cross-referencing allows data to be extracted at a line level.

“Receipt Bank can’t do that because it’s heavily reliant on people. They have some templates for some standard invoices, but in general Receipt Bank doesn’t have full table extraction,” he said.

“If you don’t have table extraction, what that means is you can’t extract at a line level, and you can’t split up at a line level if you have something like a food invoice, where there might be GST on one line but not another. We preserve all the data from the invoice, all the descriptions, and each line price.”

Fitzmaurice said he launched EzzyBills in June of last year after a year of development, with the startup venture drawing on his earlier experience working as a developer in Silicon Valley.

“I’m a software developer and I was over in Silicon Valley at the startups there – not my startups – for about 10 years. I had a bit of experience in how they’re funded and things like that,” Fitzmaurice said.

“In my case, I’ve been doing quite a bit of remote development work, consulting and that sort of thing when I started this company. So I had enough money to fund the development the product, so that’s what I’ve done. I haven’t received any funding from anyone else.”

While EzzyBills is based in Kingscliff, NSW – just across the border from the Gold Coast – Fitzmaurice said being outside the major capital cities is no longer a disadvantage for tech startups.

“The things that you need to develop a company like I have – apart from the money – is you need good access to the internet. You need somewhere to host your product. That’s in a data centre, and it doesn’t matter if I’m here or somewhere else,” he said.

“In terms of product promotional marketing, it’s all AdWords and the [Xero] marketplace, which is agnostic to where I reside or where the company is.

“We have a lot of customers in Tasmania, mainly because we did a trade show there. But it doesn’t matter where we reside, it’s where we pick up customers and that’s not really going to be linked to where we are.”