A pen designed to make handwriting on your iPad easier 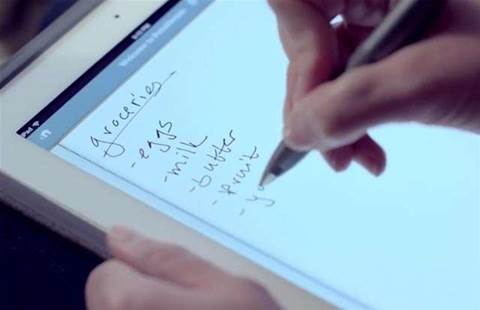 It looks like a normal paper and ink pen, but on closer inspection this is actually a "digital pen" designed for your iPad.

Digital pens are one of those gadgets that sound like a great idea in theory - they record your notes and store them online, so you can access them everywhere you go.

We’ve used the Livescribe before, but now another of these types of pens has appeared on our radar. It's called the Jot Script Evernote Edition Stylus and it's designed to mimc the feel of a regular ink pen, but you can use it to write on your iPad.

Unlike the Livescribe, which you use to write on a paper notepad (with your notes also recorded to the cloud), the Jot is just for writing on screens.

The special feature is the writing tip, which is smaller than the nub you get with some other "styluses" for iPads and other tablets. According to the sale pitch, you'll get a "natural handwriting experience with guaranteed accuracy in every line, letter, and signature."

The pen uses an app called Penultimate, which syncs your notes using Evernote - which might make it more appealing if you're already an Evernote user.

According to the web site it works on all iOS devices, but you'll need a device with Bluetooth to use some of the fancier features. It costs $119.99.