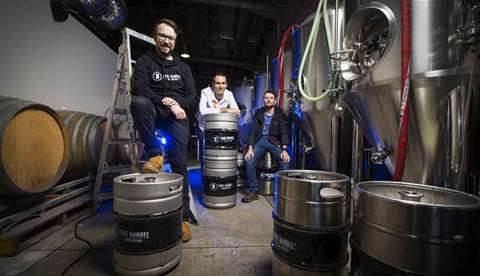 Binary Beer has developed a smart keg that can eradicate stale beer or worse – running out of beer.

The wireless sensors for Binary Beer’s smart beer kegs monitor fill level, location, and environmental conditions such as temperature. This has the potential to allow just-in-time deliveries and the removal of kegs when the beer gets past its best either from normal ageing or because it has been mishandled or allowed to get too warm.

The first smart kegs are being used by Wollongong craft brewery Five Barrel Brewing and the Headlands Hotel.

Binary Beer is based at iAcelerate – the University of Wollongong’s startup hub – and was founded by UoW alumnus Michael Burton.

“We wanted to find ways of telling [home brewers] how much beer was left so that they don't run out beer when they have guests around,” Burton explained.

“Then we realised that this is actually an enormous problem that is going out around the entire beer industry. Beer kegs, especially in the craft beer industry, are just running out and it can take days before a replacement beer arrives.

“Sometimes, the opposite happens where you have too many beers sitting around for too long and then the beer isn't as fresh as it could be.”

If the brewery has this level of visibility of stock at outlets, it could even shuffle kegs between hotels or bars to reduce wastage.

Development assistance has been provided by five information technology and computer science students from the University of Wollongong, led by James Rule. Such projects are a mandatory part of their final year studies.

“The goal of the project is to leave Michael with a set of tech which he can then finish developing to sell to his customers,” Rule said.

“It will allow them to track beer, to track their kegs, how much is in those kegs and how long it's been away from the brewery. We are trying to prove that the tech is a viable business product.”

There have already been talks between Binary Beer and major brewers including Heineken and Anheuser-Busch.

Binary Beer uses the LoRAWAN set up by the University of Wollongong's SMART Infrastructure Facility to relay the data from the smart kegs.

LoRaWAN is a low-power wide area network specification designed for IoT applications, where small amounts of data need to be transmitted securely and with low power consumption – an AAA battery can last three years or more.

The geography of Wollongong is such that only a small number of LoRaWAN gateways are required to cover the area. LoRaWAN networks exist in 200 cities around the world, including Adelaide, Melbourne, Perth and Sydney.