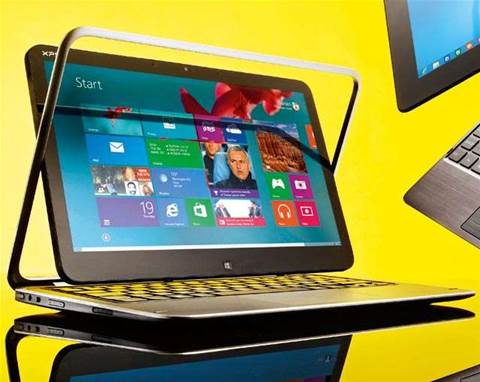 It’s not only about the Start button. This might be of interest if you are thinking about updating your computers at work to Windows 8.1.

[We spotted this article in PC & Tech Authority magazine and thought it might be of interest if you are responsible for updating your computers at work, or perhaps you have an IT person who does this for you.]
Windows 8.1 is a free update for every Windows 8 user, including those on ARM-based RT devices, so most of us will install it as a matter of course.
Newsletter Signup

I have read and accept the privacy policy and terms and conditions and by submitting my email address I agree to receive the Business IT newsletter and receive special offers on behalf of Business IT, nextmedia and its valued partners. We will not share your details with third parties.
There are plenty of new experiences in store, both large and small. Some are big changes that you’ll notice right away: the enlarged Start screen tiles, for example, jump out at you as soon as you power up your PC.

But there are also plenty of advanced, under-the-bonnet upgrades that make Windows 8.1 much more than a service pack. Here’s our breakdown of ten of the most powerful features in 8.1 that will benefit power users, businesses and developers.
1 Mobile tethering
Windows 8 is designed for out-and-about use; increasingly, this means laptops and tablets with mobile data connections. Windows 8.1 introduces the ability to share a 3G or 4G connection with other devices over Wi-Fi, turning a Windows tablet into an ad hoc hotspot. If you’re logged into a client device with the same Microsoft account as the gateway device, no configuration is required, and connected clients will automatically detect that they’re using a tethered connection and default to “cost-aware” mode.
There’s also a new settings interface specifically for mobile connections, which lets you manage your mobile network, set and change your SIM PIN, and keep track of estimated data usage.
2 Per-display interface scaling
It’s long been possible to scale up Windows’ fonts and icons to a maximum of 500%. But what’s right for your main screen isn’t necessarily going to work for a secondary display. Take, for example, Samsung’s Ativ Book 9 Plus, which is sold overseas and boasts a 3200 x 1800 display. The user interface is scaled to 200%, which keeps everything at a comfortable size on the built-in panel. However, if you connect this laptop to a 1080p TV, that scaling factor produces absurdly oversized text and icons.
Conversely, high-end TVs are already starting to hit 4K resolutions (3840 × 2160); hook up a regular laptop set to 100% scaling and everything will appear tiny.
Windows 8.1 solves this by letting you scale each screen independently. To access this new setting, right-click on the Windows desktop, select Screen Resolution from the dropdown menu and select “Make text and other items larger or smaller”.
3 Thin cloud storage via SkyDrive 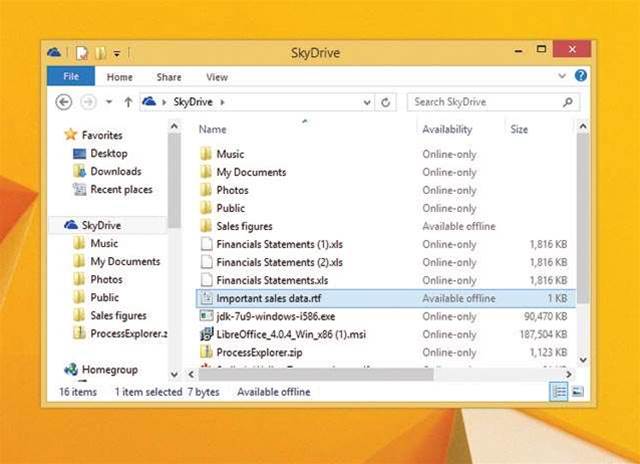 Windows 8.1 integrates cloud storage into the OS; a SkyDrive dropdown now appears in the navigation pane of every Explorer window. However, this isn’t the basic syncing service we’ve seen before. Although your files appear to be right there on your desktop (or in the SkyDrive tablet app), the SkyDrive view is now actually a window into your cloud storage space. The files you see don’t take up any space on your local disk until you double-click to open them, at which point they’re quickly downloaded and opened. When you’ve finished with them, they’re quietly synced back to the cloud. You can also download files for full-time offline access by right-clicking and selecting “Make available offline”, and reclaim the space taken up by local files by selecting “Make available online-only”. For more on this, see SkyDrive and libraries, above.
4 PowerShell 4
For systems administrators, Windows 8.1 introduces a major new release of PowerShell (which is also being made available for Windows 7, and Windows Server 2008 R2 and 2012). The key new feature is a system called “Desired State Configuration”, which lets you implement settings and installations across a network by simply pushing a script-style configuration file to the desired clients. For example, you might create a file declaring that certain server roles must be activated, certain Registry settings must be enforced, and specific applications must be installed. When the client PC receives these instructions, the PowerShell host checks the system state and quietly applies changes as needed. It’s a terrific time-saver that can effectively turn major rollout projects into brief scripts.
5 Workplace Join and Work Folders
Windows 8’s dual personality encourages the use of a single device at home and in the office. Windows 8.1 – in conjunction with Windows Server 2012 R2 – supports this with a feature called Workplace Join. This lets IT managers authorise personal devices to connect to selected network resources, such as shared folders and printers, without giving them free rein on the corporate LAN. It’s partnered by the new Work Folders feature, which lets Windows 8.1 users automatically sync data back and forth across their user space on the workplace’s LAN – even on devices that aren’t connected to the domain – while leaving personal files untouched. The administrator can also insist on security policies such as encryption and lockscreen passwords. IT managers can even remotely wipe the contents of work folders and company emails from users’ personal devices without disrupting their personal data.
6 Better search 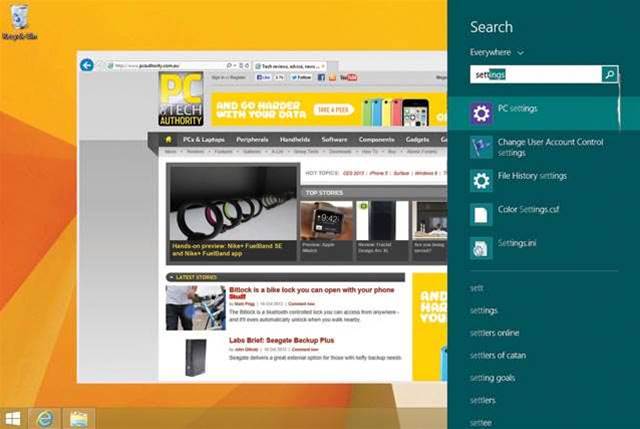 Whereas Windows 8 split your search results across three categories, Windows 8.1 shows them in one place. What’s more, if you search using the Search charm (or via the new Windows+S shortcut), your results appear in a neat bar at the side of the screen, rather than taking over your whole display. By default, Windows now searches your SkyDrive files in the cloud as well as local files, and it can also search data within apps, such as email messages in Mail and individuals in People.
7 Wi-Fi Direct and NFC printing
Windows 8.1 supports Wi-Fi Direct pairing, letting Windows devices connect directly to supported printers without requiring them to join the local wireless network or download and install clunky drivers. To search for a compatible printer, open the tablet-style PC Settings app, select “PC and devices”, then click Devices | Add A Device. Businesses can also take advantage of NFC pairing, which lets you connect to a printer by tapping a Windows 8.1 Enterprise device against it. It seems this may work even with non-NFC-equipped printers: Microsoft says it will be possible to retrofit older models with NFC tags, although it hasn’t yet revealed how.
8 InstantGo
InstantGo is Microsoft’s new “connected standby” feature, which keeps data, apps and tiles on certified hardware in sync while the device is asleep – and promises wake-up times of less than 300ms. InstantGo-compatible laptops and tablets can also take advantage of Windows 8.1’s full device-encryption feature, which is now available for all versions of Windows. This harnesses the security of the TPM to make it effectively impossible for a thief (or the lucky finder of a lost laptop) to access sensitive data without the user’s credentials.
Where’s Windows 7 File Recovery?
Almost everything that’s new in Windows 8.1 extends the capabilities of Windows 8. One thing that’s quietly gone missing, however, is the Windows 7 File Recovery tool. As the name implies, Microsoft considers this tool deprecated in favour of the more versatile File History tool, so upgrading may involve a change to your backup routine. Don’t panic, though, since you can still manually access your old backups if need be – your stored files are archived as a series of ZIP files on your Windows 7 backup drive.
The inevitable upgrade 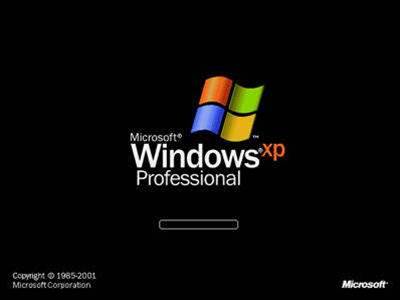 We are constantly astonished when we hear from readers who are still running Windows XP as their OS of choice. While we totally understand the sentimental attraction to the classic OS, and the horrible generational leap that was Windows Vista, the reality is that both hardware and software has well and truly moved on from the glory days of Windows XP.
The situation is only going to become worse next year when Microsoft finally ceases all support for the twelve year old operating system. This means that it will be even more vulnerable to exploits and malware, and for the average consumer running Windows XP will be even riskier than it currently is.
Since the OS was launched Microsoft, and the industry as a whole, has evolved significantly, and not only does the OS lack modern security features like the at times annoying but very important User Access Control, but it doesn’t support a lot of the hardware technologies that have transformed the PC in the past decade. That means no proper support for TRIM commands, rendering SSDs a less than enticing prospect (TRIM enables the SSD to clear ‘deleted’ blocks of flash memory during idle times, ensuring that performance remains snappy), no support for the latest DirectX technologies, and dwindling driver support.
For a lot of people reading this, the very concept of those with an inherent interest in PCs running Windows XP may sound counterintuitive, but we still hear about it with shocking regularity. We can understand that there are still some commercial areas where there is no need for a more advanced operating system, such as in older digital signage and point of sale solutions, where the OS sits behind a farily lightweight, heavily customised interface. Microsoft does have a program in place for big companies who want to continue having their Windows XP solutions supported, but this costs big dollars and doesn’t mean that the results will ever make it to the public. That means for consumers security holes will stay unplugged, and drivers will fall more and more behind.
This impending end of life of Windows XP means that Windows 8.1 is going to be the upgrade option for the majority of those who are stubbornly clinging on to 2001. If you really cannot stand the thought of the modern UI lurking in the background, you can still find copies of Windows 7 for sale, but the learning curve with Windows 8.1 isn’t anywhere near as tricky as it seems, and is even smoother with the changes introduced in the latest version. We have been running Windows 8 as our main OS for a year now, over various systems, and seldom find ourselves having to navigate through the modern UI features. This can be made even simpler with some of the Start Menu replacement programs, which eliminate the main annoyance with the OS (the tweaks in Windows 8.1 are appreciated, but they still feel like a slightly passive agressive response to the demand for the start button’s return).
Our personal choice is the free Classic Start program, if only because it is the one supplied by one of our favourite online tools, Ninite, which allows for quick installing of programs on fresh PCs. The other popular option is Stardock’s Start 8, which cost  US$4.99.
The reality is that with the launch of Windows 8.1 a lot of our annoyances with Microsoft’s shifted philosophy are a thing of the past. Ironically our finding of peace with the OS has largely derived from the realisation that we can just ignore the live tiles, app store and other fluff added in Windows 8 and with a few minor adjustments live as happily on the desktop as we did with Windows 7,  or indeed any other earlier version of Windows.
Microsoft is going to continue down its current path, and following is nowhere near as annoying as continuing to use Windows XP.
Copyright © PC Pro, Dennis Publishing
Copyright © PC Authority, nextmedia
Tags:
81 powershell skydrive software windows workplace
By Darien Graham-Smith
Jan 17 2014
12:28PM