With the major update for Windows 10 coming tomorrow, we reveal the improvements you're likely to see.

Windows 10 continues to evolve. Following on from last year’s Anniversary Update, Microsoft will roll out its second major platform update starting from April 11 (US time), bringing new features and technologies to every Windows 10 user.

It’s called the “Creators Update” (that's right, no apostrophe) – but don’t think it’s only of interest to designers and other creative types. Alongside a few headline features, you’ll notice tweaks and upgrades throughout the operating system.

The good news is that these changes are all for the better. That’s just as well, since this isn’t an optional download. Those of us using the Home or Professional editions of Windows 10 will be getting the Creators Update whether we ask for it or not.

What’s new in the Creators Update?

The big new idea in the Creators Update – the one, presumably, that justifies its name – is a push into 3D. Part of that is the bundling of the new Paint 3D app. Originally released last year as a technology preview, it's now built into Windows, allowing you to easily "doodle" 3D objects and scenes. It’s undeniably fun to play with, and you can achieve impressive results with a little clicking and dragging around. 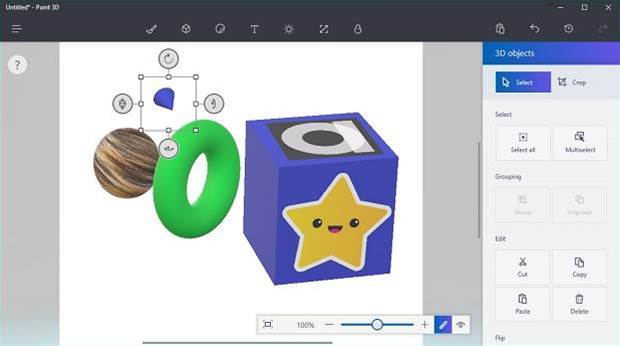 It’s a limited offering, though. While it’s possible to output your creation to a 3D printer and to work with pre-made models from Microsoft’s Remix 3D website, Paint 3D lacks the precision tools needed to create complex real-world objects.

Intriguingly, Microsoft has demonstrated an app called Windows Capture 3D that lets you use your smartphone as a 3D scanner, to create virtual models of real-world objects, but that’s not a capability built into the desktop app right now. Like the original Microsoft Paint it’s a fun showcase for Windows’ potential rather than a serious tool in its own right.

The Creators Update also aims to extend Windows itself into the third dimension, via Microsoft's Mixed Reality application programming interface (API). Previously known as Windows Holographic, this was revealed as part of the original Windows 10 vision back in 2015; now it’s finally coming to reality. Acer, Asus, Dell, HP and Lenovo are all planning to release headsets that let you map interactive 3D content onto the world around you, at prices as low as US$300. Those are expected to arrive in the months following the Creators Update: we’ll have to wait and see how well they work.

Having gained support for extensions in the Anniversary Update, Microsoft’s Edge browser now gets a slew of new features, including native WebVR support for 3D apps to go with the aforementioned headsets. Edge can also now read ebooks in unprotected EPUB format and you’ll be able to buy books directly from the Windows Store – so in theory your Windows tablet could replace a Kindle or other e-reader. 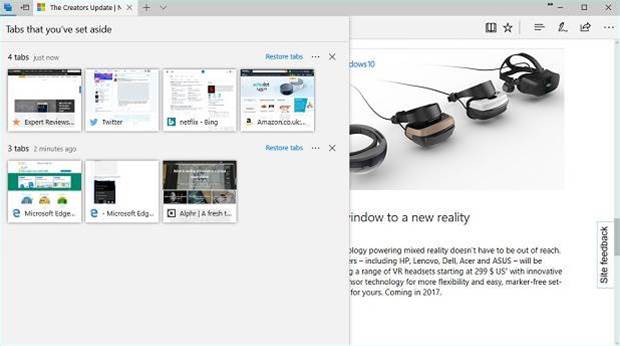 Everyday users may perhaps be more interested in new options to save and reload tab groups – so you can quickly call up a specific set of pages – and a new preview bar that shows thumbnails of all your open tabs, helping you to jump straight to the right page. It's also possible to open a new window, or a new private window directly from the Edge icon’s jump list.

Our favourite new feature is the new “set aside” button that temporarily sweeps all your open tabs into a hidden sidebar, allowing you to start browsing afresh with a clean slate. A quick click opens the sidebar, allowing you to restore individual tabs, or bring everything back at once. Through it all, the browser remains impressively fast and lightweight, and these new features make it a more tempting browser choice than ever. It’s just a shame it still lacks cross-platform capabilities, so you can’t sync your preferences with an iOS/Android smartphone or MacBook.

One of the big frustrations with Windows 10 has been the lack of control over updates. You have little or no choice about huge amounts of data coming down the line and, even after years of user complaints across numerous versions of the operating system, Microsoft still has the knack of restarting your PC at inconvenient times.

The Creators Update brings several improvements that Microsoft hopes will reduce the annoyance. For a start, when a new update requires a reboot, Windows will now warn you with a large colourful banner, allowing you to choose a restart time that suits you, or snooze the update for three days with a click. 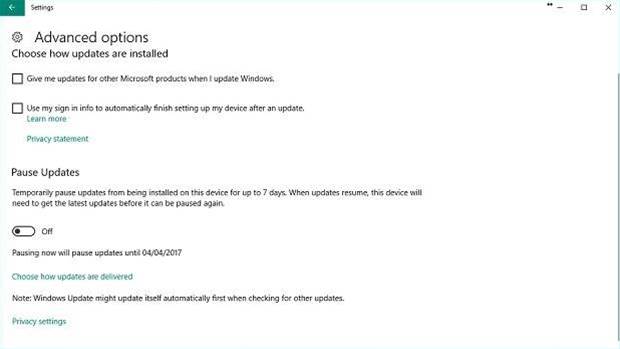 The Active hours options have been extended, too. It's now possible to set a regular period of up to 18 hours a day during which Windows won’t restart, up from 12 hours in previous versions of Windows 10. And, if you have a major project that simply mustn’t be interrupted, you can now pause updates entirely for up to seven days.

Finally, thanks to Microsoft’s new Unified Update Platform, your PC will now only download the specific files that require updating on your PC, rather than fetching a huge archive that might not be needed. At the end of the day, you’re still going to have to update Windows regularly, but the Creators Update gives you much more clarity and control over when your computer restarts, which gets two thumbs up from me.

Some new features in the Creators Update will please gamers. A new Game Mode lets Windows give CPU and GPU priority to games, to ensure background processes and applications don’t drag down performance. There are plans in place to activate Game Mode automatically when recognised games are running in the foreground, although you can always disable it, either via the Game Bar or the new Gaming page in the Windows 10 Settings app.

There’s also new support for Beam, Microsoft’s own live-streaming service.  You can now start sharing a live video stream of your game over the internet with just a few keypresses, directly from the Game Bar. Thanks to a claimed latency of less than a second, you can also carry on live conversations with viewers, which appear overlaid on your game screen and even allow remote watchers to trigger in-game events.

One of the most controversial aspects of Windows 10 is how much information it shares with Microsoft about what you’re doing with it. With the Creators Update, Microsoft has made a few changes aimed at providing greater transparency. When you install the update, you’ll be prompted to review your privacy settings: the Express option, which previously enabled all of Windows 10’s information-sharing settings, is now gone. These configuration settings will now be put directly in front of you, so you can actively choose whether to allow them or not. 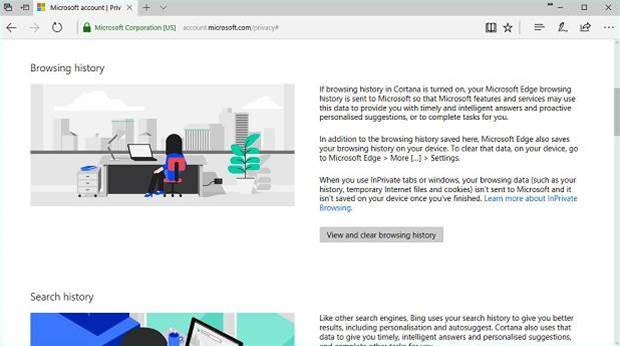 Along with this change, Microsoft has also introduced a new online privacy centre where you can check up on the information that’s stored about you online, and optionally delete it from Microsoft’s servers. Really this should have been in place from the start, but it’s a step in the right direction that should go some way towards assuaging privacy fears.

Microsoft’s voice assistant gets some new features in the Creators Update. New capabilities include controlling the volume of audio, and locking, restarting or shutting down your PC or laptop. It's also possible to set more sophisticated recurring reminders by simply saying (for example) that you want a nudge every week.

Cortana also gets a new full-screen interface. If you leave your keyboard and mouse untouched for a while, then bark "Hey, Cortana!" (assuming you’ve allowed your PC to listen for that phrase), a giant-sized Cortana overlay will take over the screen, with a big font that makes it easy to confirm Cortana has heard and understood your request.

For some, these major feature updates may be incredibly valuable; for others they may not make much difference. Either way, the Creators Update also brings dozens of little enhancements, some of which are sure to make an impact. 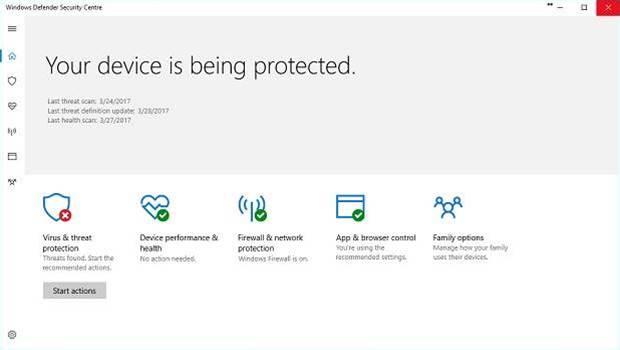 One you might quickly notice is that Windows Defender has now morphed into the Defender Security Centre, a Universal Windows Platform-style app that conveniently brings together malware protection with monitoring options for system health, firewall protection, app and browser control and parental controls.

Elsewhere, a new option called Night Light automatically fades the screen to a warmer, more restful colour temperature at night. The new Storage Sense feature can now automatically clear out temporary files, and documents that would otherwise be hanging about in the Recycle Bin. New scaling techniques aim to reduce the problem of blurry text on high-DPI screens. 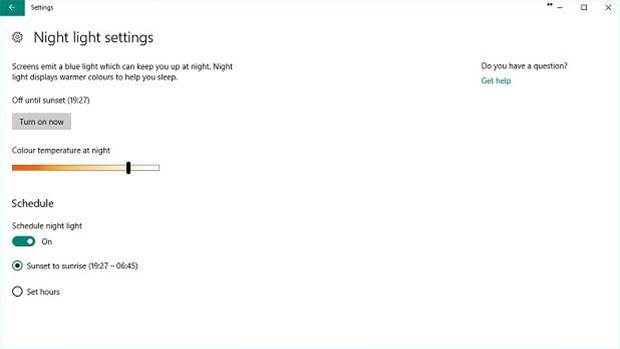 In all, while the Creators Update might lack a single defining focus, its breadth means that almost everyone will get some benefit. And no one loses out on anything: Microsoft has wisely stuck to improving existing features, rather than trying to foist new ways of working on us. Maybe in a few years we’ll be hungry for a more ambitious update, but right now the Creators Update hits the spot perfectly, turning Windows 10 into a more refined, smarter version of itself. Considering it’s completely free for all Windows 10 users, we’d have to say that makes it a pretty big hit.