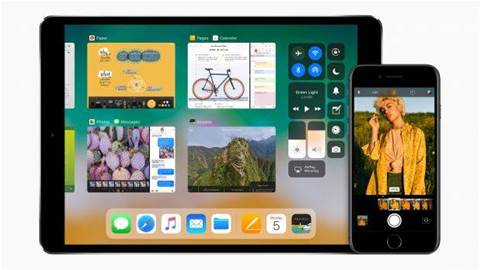 With the release of the new iPhone X and 8 comes new version of Apple’s mobile operating system, and the company has announced that iOS 11 will be available to all Apple users with compatible devices from 19 September.

iOS 11 brings with it a number of new features, including both surface-level cosmetic tweaks and seriously meaty feature upgrades. There's a slew of updates, but here are the biggest things that Apple is introducing with its latest iOS version.

Apple has improved its signature AI voice assistant for 2017's range of devices, making its male and female voices more expressive and natural, enabling them to adjust intonation and pitch as well as emphasis and tempo.

It's now able to translate English words and phrases into Chinese, French, German, Italian and Spanish, and can offer more personalisation based on use of Apple's Safari, News, Messaging and Mail apps, suggesting topics you search for on Safari when you're typing an email, for instance.

A big new feature for iOS 11 is the inclusion of augmented reality, with iPad and iPhone developers encouraged to use their built-in camera and motion sensors with the new ARKit to layer virtual elements on top of the real world for a different take on apps and games.

Apple's upgraded Portrait Mode to take pictures with optical image stabilisation, True Tone flash and HDR, to make them better-looking than ever. 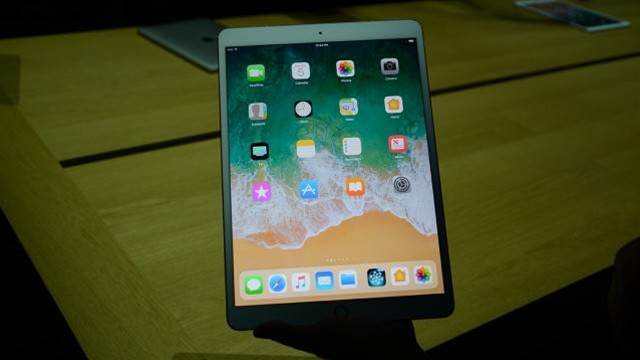 While Memory movies can now play in both landscape and portrait modes, Apple is conscious of your storage space, so uses High-Efficiency Image File Format to halve the size of every photo you take on iPhone 7 and 7 Plus (and presumably on the iPhone 8, too).

Apple Pay gets ever more convenient with iOS 11, now allowing you to not only pay over the counter with contactless technology, but pay friends simply by sending an iPhone-to-iPhone text using Messages.

For the first time, Apple is also allowing users to authorise payments using facial recognition, using its new FaceID technology. If voice is more your bag, you can use Siri to pay someone with the debit or credit cards you have stored in Wallet. Recipients can transfer the money from their Apple Pay Cash account into their bank account, or use it to buy things using Apple Pay.

Apple has also added a feature that allows users to bypass the Touch ID fingerprint scanner in order to make an call to the emergency services. By tapping the Touch ID button five times on a compatible iPhone, iOS 11 will bring up the option to dial emergency services without the need to enter a password to make the call.

The idea is the new feature is to ensure that iPhones can still be useful in situations where the user might be in danger or if they are having difficulty dialling the emergency services, or if they are unconscious and someone else needs to use their smartphone to make an emergency call.

Furthermore, the five rapid taps disable Touch ID and revert into requiring a password to be tapped in to the handset in order to activate it; a useful feature in situations where the user may be forced to unlock their phone using Touch ID, for example by authorities seeking to make people unlock their phones with their fingerprint in order to access their data.

The fingerprint scanner will then be disabled until the user puts in their password which will then switch Touch ID back on. Essentially, the additional feature adds another privacy option into the security suite of iOS 11.

Why iOS 11 is a game-changer for iPads

While iOS 11 adds a slew of new features for everyone, there’s a strong focus on the iPad that, Apple clearly hopes, will elevate the tablet into a bigger league of productivity.

We were able to try out a beta of iOS 11 on a first-generation iPad Pro 12.9in – and like all beta previews, it’s possible there may be changes in the final release – but we’re confident that iPad users will be seriously impressed by the improvements in iOS 11.

It may not be able to run desktop applications, but in every other way iOS 11 is a game-changer for productivity – and, of course, there’s a big library of powerful iPad-friendly apps to choose from. If you didn’t believe that the iPad can do “real work”, you should start rethinking now.

One of the concepts Apple borrowed from OS X for iOS was the Dock, a row of icons that live at the bottom of the screen and give quick access to your most-used apps. However, how the Dock worked in iOS was always much more limited in comparison. 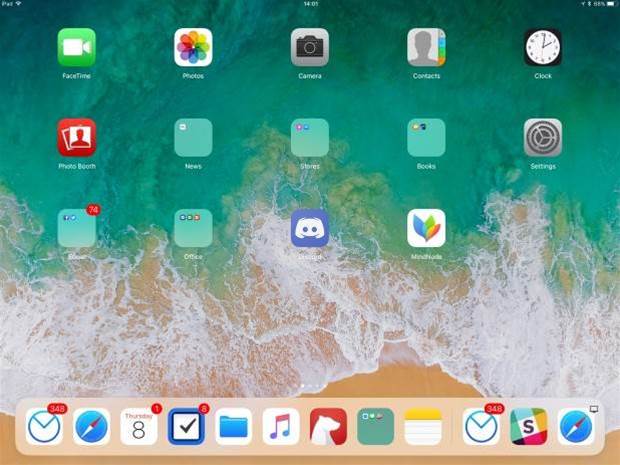 You could store only four or five applications; there was no split between apps on the left and useful stuff on the right. And there was no way of getting to the Dock without going back to the homescreen.

The new Dock is much more Mac-like. First, it can fit many more icons, as the size of the Dock shrinks to fit. Second, it has a section on the left-hand side reserved for your two most recently opened apps, plus one for whatever’s on your Mac for use with Continuity. Third, the Dock can be revealed at any time in any app by swiping upwards, making launching a second application much easier than before.

The Dock is central to how you manage open applications on the iPad. You can still swipe up with four fingers to see your open applications, but instead of these being presented as a row of apps you swipe through, you see each “window” in a grid of large thumbnails, meaning you can move through open applications much more quickly. To the right, you see what was the Control Centre, now incorporated into this view (and more on that later).

Multitasking has been built into iOS for a long time, but it was only with the release of iOS 9 that the iPad gained the ability to have two applications on screen at once. While it worked, the user interface for controlling which apps were onscreen was never particularly satisfactory: you swiped in from the right, scrolled down an endless series of app icons until you saw the one you wanted, and then tapped the icon to open it. Unless the app you wanted was one you had opened recently, it was always hard to find.

With iOS 11, this model changes dramatically. Swipe up with one finger and you reveal the new Dock. Drag an icon from the Dock to the right-hand side of the screen and the app opens in “pop-over” mode as a floating separate window. Grab the handle at the top, drag down, and your app drops into split-screen view.

If you already have the screen split, you can drag to either half to open up an application wherever you want. And pairs of applications parked onscreen next to each other are persistent. Put Safari next to Notes, say, and the next time you open either of them you’ll get them back again, side by side. In this sense, split-screen sets act more like Spaces on the Mac, rather than just open applications.

Annoyingly, there’s still no search right now and no way at all to find an application not in the Dock or open. Overall, though, it’s a better system than before, making it more obvious what you’re opening and where it’s likely to end up.

One of the minor changes is in the way you close open applications if, for example, one is misbehaving. Rather than closing by opening the switcher and swiping the app up and off screen, you press and hold for a second on it and tap a close icon.

The trickiest thing to get to grips with initially is the new drag-and-drop mechanism for moving text and images between apps. If you have two apps open side by side, it’s very easy: you simply press and hold on a selected piece of text or image then drag it over to the other app.

Where it gets a little more conceptually difficult is when you want to drag something over to another application that isn’t onscreen. Our first inclination was to try to drag down to the bottom of the screen, but Apple has gone a lot deeper than that. Instead, you press and hold the text or image and, with your other hand, swipe up, exposing both the Dock and any other open applications.

What Apple has done here is impressive. Instead of copying the single-pointer, single-operation model we’re used to from the world of the mouse, where only one active element can take action onscreen, it’s taking full advantage of multi-touch technology. You have ten fingers on two hands: why not use them?

Once your brain groks this, it’s like having the scales lifted from your eyes. Why haven’t we been using multitouch in this way before? Why aren’t all touch interfaces like this? As soon as that barrier in your head that tells you there can only be one “pointer” onscreen at the same time is broken down, it feels like the most natural thing in the world.

We’ll admit it, we rarely use Apple Pencil, and we suspect that’s also the case with a sizeable group of other iPad Pro users. Apple wants to change this with iOS 11, which integrates the Pencil more deeply and completely with the OS and apps. 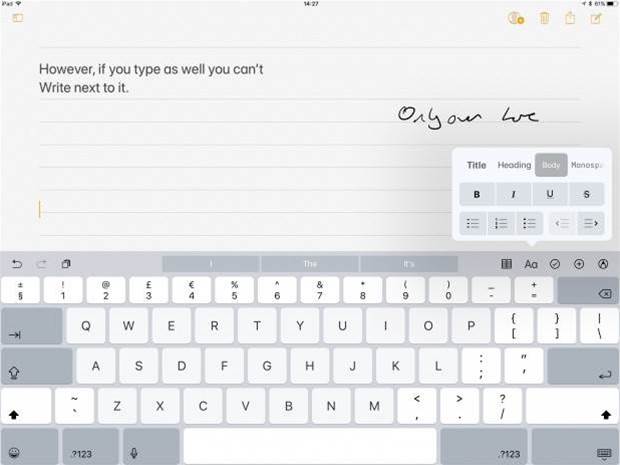 First, the company has worked to make Pencil more responsive, trimming lag to 21ms (that’s the time between moving the Pencil and it making a mark onscreen) by using a bit of machine learning to predict where you’re going to move next. We honestly can’t say we’ve ever found this an issue, but it will no doubt please those who want the best possible performance.

What we definitely did notice, though, was the much-improved Pencil support in Notes. In iOS 10, you could insert sketches but doing so opened up a whole new screen; what you couldn’t do was sketch directly into a note. Now, you can start writing or drawing anywhere in the note, with one exception. You can’t currently sketch or write on an area of the page that’s already got typed text on it; instead, you have to sketch underneath the text or above it, not alongside. In that sense it’s not as elegant as Microsoft OneNote, but it’s close.

At long last, you can have lined or gridded paper for handwritten notes, which makes jotting and sketching look neater, and the way Apple handles typing on lined or gridded notes is pleasing, too. Where other note applications just type over the lines, which looks messy, Apple removes the lines wherever you type and leaves them in everywhere else.