What is Office 365? A handy summary

Ready to make the switch? This introduction explains the strengths and weaknesses of Microsoft Office 365.

If you rely a lot on Microsoft Office to get work done, then sooner or later you might look at moving to Office 365. This article is a handy summary of what you need to know. It was published earlier this year by PC & Tech Authority magazine and we thought we'd share it with you here.
Two years after its launch, there’s still a surprising amount of confusion surrounding Office 365. Many people equate it with Office 2013, assuming it’s simply the latest version of the desktop productivity suite. Others think it’s a straight rival to Google Drive. However, as regular readers will know, it’s far more than either of those definitions.
It doesn’t help that there are so many incarnations of Office 365 available. For home use, however, it’s relatively simple: $12 per month (or $119 per year) buys you the latest version of the desktop Office suite, 20GB of online storage via Microsoft SkyDrive and an hour’s worth of free Skype calls. A $9 per month (or $89 per year) option called Office 365 Personal is also coming soon.
When it comes to businesses, Office 365 is as much about offering a service as it is about productivity software. Its first ace card is hosted email, with small businesses – up to 25 users – able to buy email, shared calendars and 50GB of email storage per user from $7.90 per month. Also, employees can share “presence” information – for example, the fact they’re in a meeting – send instant messages and conduct web conferences. Every user is allocated 25GB of storage on SkyDrive Pro, too.
If you shell out $13.50 per user per month, employees also gain access to the main Office 2013 apps – including Access and Outlook – and a licence to use them on up to five PCs or Macs. Up till recently, this was only available from Telstra, but from today that exclusivity ends allowing other providers to sell the subscriptions as well – the reliance on Telstra for Office 365 has been a major bugbear for IT support companies and small business owners at times.
Larger businesses have a similar set of options, varying from a straight hosted email plan for $7 per month to the full-fat Enterprise E3 option for $33.30 (see the table below). But do the features merit the monthly payment? 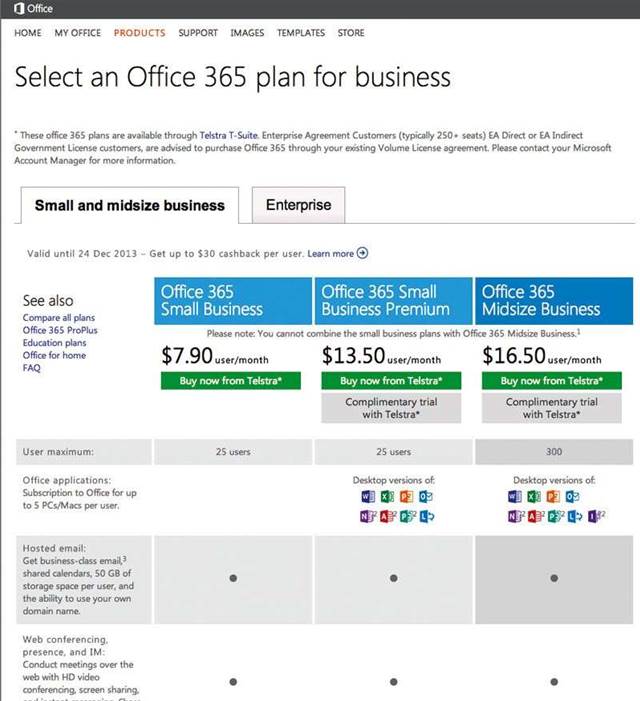 Click to enlarge. Some of the many business plans available.
Document creation
In Excel and Word, Microsoft has the two undisputed heavyweights of the productivity division. Word lets anyone create professional-looking documents and, despite its detractors, the ribbon interface is key to this: all the most popular commands sit on the Home ribbon, meaning a few clicks can turn a dull page of text into something you’d be happy to hand out at a board meeting.
Excel is another brilliantly polished tool, with lots of built-in intelligence to speed up work. For example, if you import a load of data and need to tidy it up, Excel will examine your columns and rows for patterns, so that when you start typing into an adjacent empty cell, the rest of the column will auto-fill. Let’s say you have a column containing the full names of your employees; if you start typing someone’s surname in an adjacent column, Excel will “Flash Fill” it with the surnames of all the employees. Its charts are also in a different league to those of most of its rivals – they look more professional, and Excel is better at recommending the right chart for your data.
PowerPoint is constantly improving, too. Again, Microsoft has made it easy to quickly achieve professional-looking results. That said, it lacks the glitz and slick inter-slide animations of Apple’s Keynote. Also, while fewer people will use Access (or Publisher, the desktop publishing software that’s part of Office 365 Home Premium), it’s capable in the right hands of producing complex databases.
Subscribing to Office 365 ensures you’ll always have the most up-to-date version of the desktop suite. Home Premium buyers receive five desktop licences, which will work across Windows and Macs. What’s more, if you need to do some work on someone else’s PC, you can stream Office to that machine. Thanks to incredibly clever technology, you can be working in your customised version of PowerPoint in a matter of minutes.
On the move 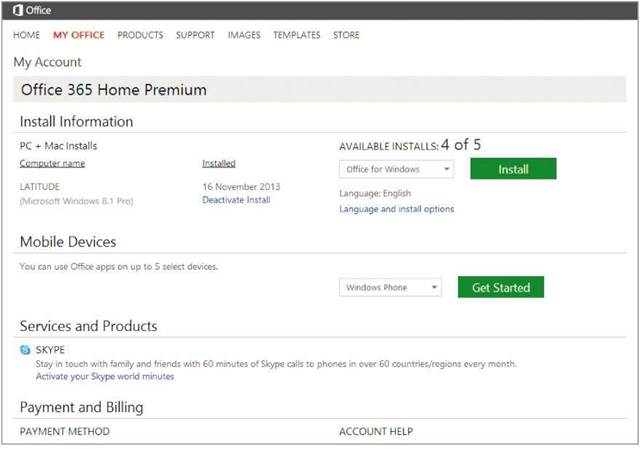 Click to enlarge. Office 365 Home Premium allows you to install the latest version of Office on up to five PCs, including Macs, via the control panel.
It wasn’t long ago that Office’s mobility features were limited to installing it on a laptop, but Office 365 turned this on its head. The central tenet is that documents are stored locally, then mirrored in the cloud via SkyDrive.
This means you can access them wherever you are – and on whichever device you choose.
This vision isn’t yet perfect, but it’s improving. We used to criticise SkyDrive for ponderous synchronisation, but this problem seems to have been fixed. That said, Microsoft is still dragging its heels as far as creating a tablet version of Office is concerned. The likes of Documents To Go and QuickOffice show that it’s possible to create a powerful office suite for iOS and Android tablets, and it’s rather dispiriting every time Microsoft repeats its mantra that “we recommend using Office Web Apps when on a tablet” – especially since Android tablets can only view documents in Chrome, not edit them.
This is all the more odd when you consider that Microsoft has had phone-optimised versions of Word and Excel since the time of Windows CE, back in the early 2000s. These are still present on Windows Phone, and while there’s no doubt they’re more suited to viewing and making minor edits than true document creation, the fact that an executive can read a report, change text and make a comment while standing in line for a cappuccino makes them respectable tools.
Microsoft has recently added Android and iPhone versions of Office as well. Again, these are optimised for viewing documents rather than creating them, but it means you can make changes to your Office documents from most phones on the market. They all tie in to your Office 365 account, and you can be sure any changes you make won’t spoil your formatting.
Business advantage
We’ve already touched upon the hosted email benefits of Office 365, but its power for businesses – particularly for small businesses – comes when you consider the enterprise-level services it offers. Enterprises have long benefited from SharePoint and Lync, but Office 365 brings them in reach of the smallest company, and with minimal hassle.
Most business subscriptions come with SharePoint Online, providing individual and company-wide storage for common data, files and documents.
Lync Online, which comes with the business and enterprise subscriptions, gives you presence, instant messaging, application and desktop sharing, plus video- and audio-conferencing. You can even link it to your phone system or a VoIP provider to provide click-to-dial wherever you see a name in any Office application. In addition, Office 365 Enterprise subscriptions now include the social web features of Yammer Enterprise Network at no extra cost.
Collaboration
When it comes to collaboration, Microsoft is rapidly catching up with Google Drive. It’s now easy to create a document, spreadsheet or presentation using a desktop version of Office and then open it up to everyone else – employees, other companies, friends, family – for editing and comments.
At long last, it’s now possible for several people to make real-time edits using Office Web Apps and see others’ changes as they’re made. You can keep the document open in your desktop app and refresh it to see changes, but we recommend switching to the Web Apps, since you’ll see these changes as they happen. Of course, it’s possible to share and collaborate using any of the online services; the advantage of Office 365 is that it gives you the power of the desktop apps when you’re creating or making heavy edits to a document.
Value for money

Click to enlarge. Note: In addition to these prices, taken from the Microsoft web site, businesses should also check with their IT provider for up to date prices. Also, the name Office 365 Home Premium will change to Office 365 Home this month. Finally, a $9 per month (or $89 per year) option called Office 365 Personal was coming soon after the time of publication.
Although we baulk at the thought of spending $12 per month on Office 365 Home Premium, it offers decent value – if you use all the features. This is especially true if you want to use Office on multiple machines. For a serious backup regime, 20GB of online storage is enough, an hour’s worth of Skype calls have a rough value of $2, and you’re buying five licences – enough for most families’ needs.
For businesses, the variety of packages on offer makes it difficult to pass a general judgement on Office 365’s value for money. What we can say, however, is that you’ll almost certainly be able to find a plan to suit your budget. The flexibility it offers means you can provide deluxe packages, with all the powerful tools, for those who need them, as well as basic email and intranet access for those who don’t.
Whatever your needs, the argument isn’t as simple as it once was.
Newsletter Signup

I have read and accept the privacy policy and terms and conditions and by submitting my email address I agree to receive the Business IT newsletter and receive special offers on behalf of Business IT, nextmedia and its valued partners. We will not share your details with third parties.
Copyright © PC Pro, Dennis Publishing
Copyright © PC Authority, nextmedia
Tags:
guide office office 365 software
By Nik Rawlinson
Simon Jones
Tim Danton
Apr 8 2014
6:58PM