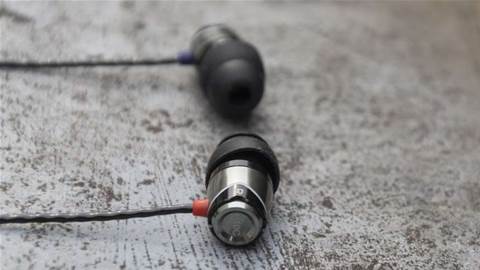 How much do you need to spend to upgrade your listening experience? No more than $100 if our experience is anything to go by.

Good headphones won’t necessarily make you more productive, but it sure can’t hurt to have good quality audio as you’re listening to music while working on a project or at the end of a hard day.

And unfortunately, the headphones supplied with smartphones and music players are, invariably, dreadful. Apple is among the worst culprits, as it took years to redesign its terrible white earbuds, finally replacing them with the still-very-average EarPods in 2012.

Luckily, the market for third-party headphones has exploded in recent times. Once upon a time, upgrading your headphones was considered a weird, geeky audiophile thing to do; now it's accepted that to get great audio you sometimes need to spend a bit extra.

The thing is, do you really need to spend more than $100? We've taken a look at a selection of budget headphones to answer this question.

Most are readily available at electronics chain stores, although you'll need to hunt around online to buy a couple of them (the AKG Y23 and Onkyo E300M).

The SoundMagic E10C isn't anything special to look at, but stick them in your ears and they'll blow you away. The volume and detail available from a pair of headphones costing under $90 are simply astonishing. There's such a sense of space and dimensionality to the music that the E10C could be easily mistaken for a far more expensive model. 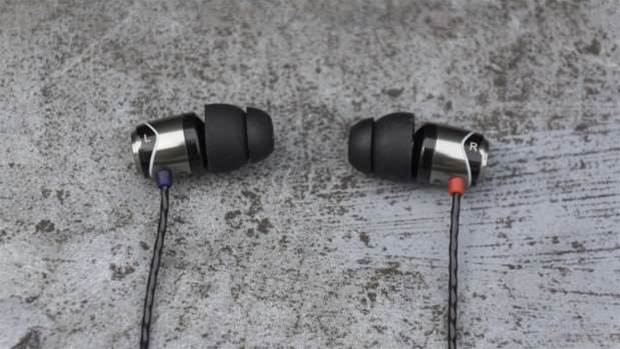 You don't get the attack, clarity and dead-flat frequency response that you do with the very best high-end earphones, but the bass extension and sense of scale are far beyond anything else we've ever heard at this sort of price.

They're more detailed and have better dynamic range than the Sennheiser CX 3.00, there's more control over deep bass, and the tonal balance is more pleasing to the ear, although the sheer amount of low-end they deliver may not be to everyone's taste.

It isn't all about the sound quality with the SoundMagic E10 C, however. They're also well made, with the earphone housing built out from metal rather than the plastic that most headphones at this price are made from, and the smooth finish on the cables means that when they rub on your clothing they don't communicate every scrape and tap straight down your ear canal.

SoundMagic has released several different variants of the E10, but the E10C is the first to sport a three-button inline remote control with integrated microphone. And this is no ordinary inline remote: unusually, the E10C remote works seamlessly across both iOS and Android devices, with play, pause, skip, voice-control activation and volume all functioning perfectly when I tried them.

The SoundMagic E10C also comes supplied with a semi-hard storage case, a generous seven pairs of variously sized silicon fitments, and an adapter that splits the microphone and headphone connection into two so you can use them with older laptops and PCs.

All told, you're getting a lot for your money with the SoundMagic E10C. They sound wonderful, come with a good spread of accessories and the price is very reasonable. Quite simply, they're the best cheap headphones you can buy.

Sennheiser has, for a long time, been a watchword for quality in the headphones sector, and not just at the high end. Its cheaper in-ear models have always been a reliable budget buy, and the CX 3.00 are no different. 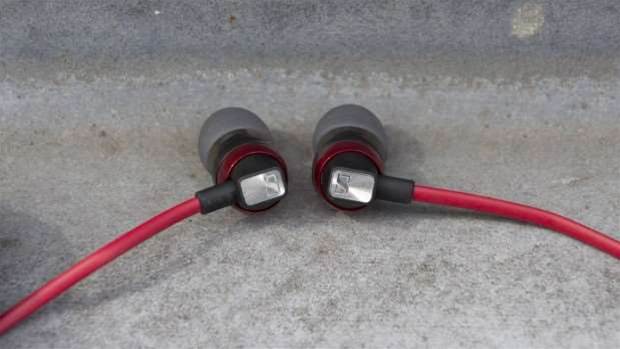 Designed as an extension to the bass-heavy, fun-filled Momentum in-ear headphone family, the CX 3.00 offers a slice of the action for a good bit less. They're obviously not a premium pair of headphones: the earpieces are all-plastic, there's no inline remote control, and they’re supplied with only four pairs of ear fittings.

There is a storage case, but it's hard plastic and a little fiddly to use, plus the ‘tangle-free’ elliptical cabling is quite microphonic. This means that you can hear thumps through the headphones as the cable taps and drags on your clothing. There's no clip to prevent this from happening, either.

We do like the low profile right-angled 3.5mm plug, though. Assuming this doesn't snag on your phone case, it keeps things neat and tidy at the phone end and is less likely to snag on your jeans pockets than other, more bulky connectors on rival headphones.

You'll struggle to find a better pair of headphones for under $90. The sound is detailed and full-bodied – and if you like your music bass-heavy you won't be disappointed. The CX 3.00 serves up oodles of juicy low-end, and although it's not the best-controlled bass we've ever heard, and has a tendency to overwhelm the mid-range somewhat, these headphones are fun to listen to.

We prefer the overall balance and better control of the SoundMagic E10C, which is available for a few dollars more than the Sennheiser CX 3.00 (and which also includes an inline remote). The E10C delivers a more forgiving and smoother sound that's slightly more laid-back. The live guitars on Mike Masse's cover of the Beatles' Blackbird have a noticeably hard edge to them at higher volume on the CX 3.00.

Still, for under $90, the Sennheiser CX 3.00 is fun to listen to, and the sound quality is dynamic, powerful and detailed.

AKG has experienced a resurgence in recent years, after shifting its focus from professional audio to the consumer space, and its long experience is bearing fruit. It still makes expensive over-the-ear cans, aimed at professionals for use in studios, but there's also a range of products, such as the Y23, produced with budget-conscious music lovers in mind. 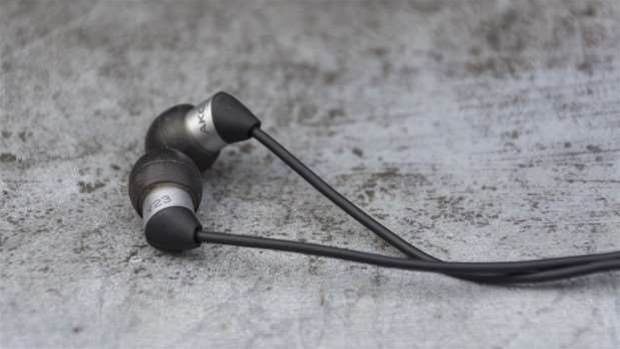 As befitting a pair of headphones this cheap, the build quality isn't spectacularly luxurious, but they're only $53 a pair and absolutely tiny, almost disappearing into your ear canal as you put them into your ears. The cable is rather short, at just one metre, and there's no inline remote control or microphone. These are budget headphones – no more, no less.

On the plus side, it's good to see you get four different sizes of ear fittings, and also that there's a lightweight carrying pouch included. Also, the AKG Y23's compact size and extremely light weight makes them comfortable to wear, while the music they produce is clean and unfussy, with plenty of punch and power where it's needed and none where it isn't. There's none of the overblown bass of, for instance, the Sennheiser CX 3.00, and there's a surprising amount of detail on offer given the price.

You're not getting the same level of sophistication as with our top choice at under $100, the SoundMagic E10C, however. The AKG Y23 has a slightly compressed sound in comparison, one that feels closer to your ears and considerably less three-dimensional. Multilayered tracks such as Six by Seven's Eat Junk Become Junk are delivered as more of a wall of sound, and can become a little tiring to listen to.

At this end of the headphone market, with so much dross floating around, the fit, comfort and reasonably flat frequency response of these AKGs makes them worth considering, especially at the price.

Plenty of mid-range and budget headphones tend to overdo the bass to avoid being labelled tinny and weak, but the danger is that the detail and subtlety of the music is lost along the way. The Onkyo E300M, bravely, swims against the relentless tide of boomy, bass-heavy headphones, its goal being a balanced sound that plays well with all types of music. 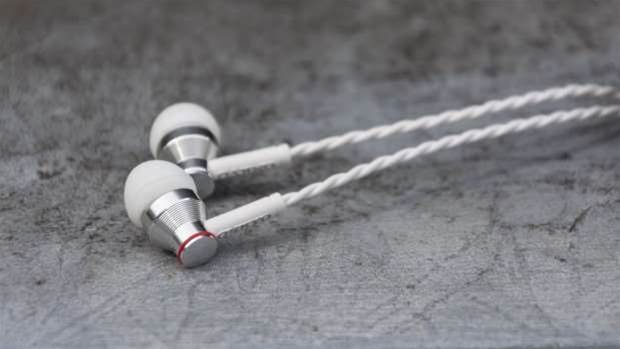 There's loads of crisp, sharp detail on offer here, and the sound signature is a lot less bombastic than other headphones at this price – the Sennheiser CX 3.00 and SoundMagic E10C, for instance.

On the downside, the ‘forward’ mid-range may not be to everyone's taste. Mike Masse's singing on his cover of the Beatles' "Blackbird" is extraordinarily clear, but this is to the detriment of the rest of the track; his guitar-playing takes a backseat.

Although you do get a decent wallop of bass with bass-heavy tracks, it's not all that well-controlled, and that accentuated mid-range can make some types of music difficult to listen to, with punk and heavy metal proving particularly heavy-going.

On the plus side, the earpieces are made from aluminium, lightweight and very comfortable. There's an inline remote here, too, with an integrated microphone that allows you to answer phone calls, skip and pause music and activate Google Now or Siri with a long press, but there's no volume control.

The finish isn't up with the best in this price bracket. The rubbery twisted cabling is quite microphonic and transmits sound into your ears readily, and the plastics used in the audio plug and cable joins both looks and feels cheap. There's no carry pouch included, and you only get three in-ear fittings.

Personally, we much prefer the SoundMagic E10C’s all-round audio performance, but if you’re not a fan of big bass the Onkyo E300M is worth considering.

JBL is into everything audio-related these days, from Bluetooth speakers to in-car audio, so it comes as no surprise to discover the firm also has a few pairs of sub-$100 headphones in its range. The JBL Reflect Mini sits at the top of this particular group and is marketed as lightweight sports headphones. 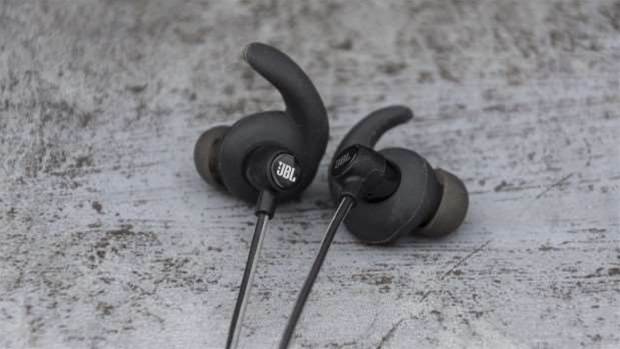 That means they're sweat-resistant (but not waterproof) and come with a couple of pairs of “wingtip” earpieces, designed to lock the headphones into your ears while you exercise. These worked pretty well for us, requiring a hefty tug to dislodge, while for listening there are a couple of pairs of standard silicone fittings. Our concern is those with larger ear canals might struggle to find a fit, however, as the Reflect Mini are only supplied with small- and medium-sized tips.

We’re also not great fans of the fact that there's no clothing clip, which means the rather microphonic cable bangs and rubs on your clothing, transmitting the sound directly to your ears as you run. There's no carry pouch included, although you do get a single-button inline remote and microphone. The cables have a reflective strip running along the length of them, which is a good safety feature.

The JBL Mini Reflect's greatest strength is that they sound utterly wonderful. Their 5.8mm dynamic drivers deliver a nice, juicy bass, a broad soundstage and plenty of detail. Although there isn't quite the same level of headroom, imaging and fluid smoothness as you get with the SoundMagic E10C, the JBLs run them very close. Multilayered electric guitars don't faze them and neither do large-scale classical tracks.

If you can live with its design shortcomings, the JBL Reflect Mini is good value for under $90.