Their story: Building houses of stone in the information age 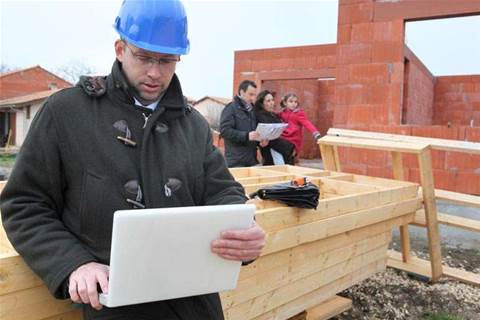 Find out how this home builder uses iPads and Pinterest to keep staff and customers on the same page.

The romantic image of a construction boss standing inside the shell of a building under construction, under a hardhat with creased blueprints in hand, has given way to the mobile age at RiverStone, which uses iPads, 3D design software and the latest trend in social media to build luxury houses for its wealthy clients. And in doing so, the company has found a way to save itself in the order of thousands of dollars. 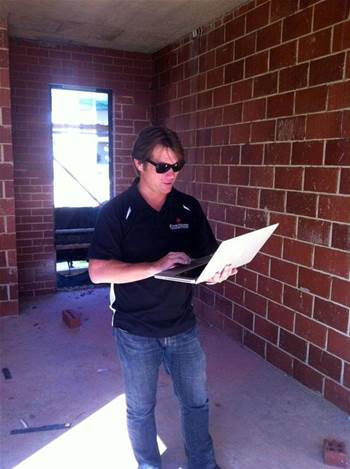 The Perth builder is a family business well-known on the west coast for its high-quality houses, which make a design feature of stone. The business, which has about $25 million of properties underway, has long used smartphones to connect its distributed workforce of managers, designers, draftsmen and contractors.

Recently, though, it switched to iPads and iPhones – in part, because those were the platforms staff preferred.  Operations manager Tim Marshall used the switch to roll out a “virtual office” to staff so they could be just as well informed in the field as they were at their desks.

The business once relied on Vodafone BlackBerrys but defected to Apple when a server licence renewal notice came in. He says issues with call drop outs on early iPhones and the Perth mobile networks also stayed his hand for a while: "Talking on the phone was still an important part" of the business, he says.
The changeover allowed it to deploy Citrix Receiver remote desktop software on iPads and to standardise on iOS for its mobile fleet.
Citrix Receiver is a free app on the Apple AppStore that presents a user's remote desktop to them, virtually. And it's easy for users to grasp, which is handy because RiverStone has no in-house IT manager. Users access content stored on the server as easily as surfing to a web page and it works on Mac, Windows desktop and mobile and Android devices.
And now there's a business case for digitising paperwork on a server because everyone has access to plans and alterations, he says.
Digitising starts when a client walks through the doors of the builder's offices in the riverside suburb of Peppermint Grove about 20 minutes drive south of the Perth CBD in its affluent western suburbs. It makes homes in the $700,000 to $4.5 million range that may take up to two years to finish.
The job is assigned a number and from then on correspondence, contracts, invoices, approvals, drawings, models and other documents are packaged and sent to the server.
"We still have the manual job files but they gather dust," Marshall says. "Everything now is scanned and put on the server in the correct location and when that document is required it's retrieved from there.”
The iPads have proven their worth in the comfort they grant managers that the right decisions are made at the appropriate time, he says.
"When the iPad technology became available we saw the benefits to view plans and keep up to date with revisions.
"With our type of individual homes, the documents are always being updated so whenever we get a change we don't have to issue 20 copies to everyone involved with the build. All staff have access to the (server) and can view them the moment they’re updated."
He says that like many small businesses, it has yet to quantify the benefits and apart from the obvious one of using less paper, "we also definitely have less onsite errors from working off old revisions".
"Our supervisors onsite, if there's a major milestone with the build like a cement slab is being poured or roof is going on they tap into the server to double check and make sure there's been no further changes from what the guys have been scheduled to do onsite."
But town planners are not so advanced: "Most councils still haven't embraced the technology in terms of doing online applications; they're still all on paper and manual handwritten submissions, which is a bit frustrating". 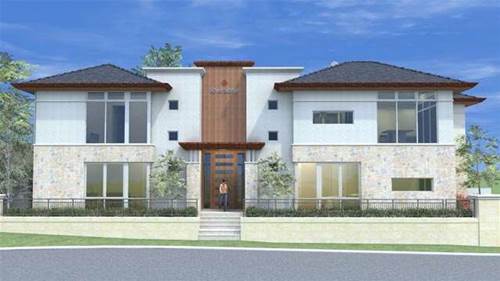 3D image of Riverstone display prior to construction. Click to enlarge. 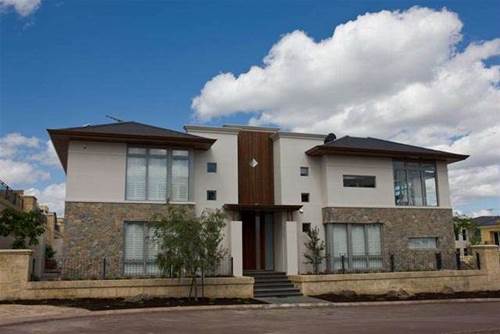 The final home. Click to enlarge.
RiverStone turns its ArchiCAD files with the house designs into fly-throughs for the customer using Graphisoft Virtual Building Explorer. Such prototyping allows staff and customers to spot trouble before ground is broken.
Roofs, especially, once created problems, he says. "The roof, how it came together and pitched and how the angles worked in with each other was very hard to get right on a 2D drawing; when we got out on site it invariably didn't work," Marshall says.
"At the very worst, we’d organise a roof carpenter and if it didn't work out on site that could cost us weeks ordering materials or going back to the office and remodelling."
He estimates it saves the business thousands of dollars and weeks in costly mistakes avoided in such jobs while enhancing its professional standing with customers. "And some of those changes would affect the design of the home."
Virtual Building Explorer gives customers a look inside their virtual house well before lock-up.
"It's handy for us for a client to walk through the house and things will catch their eye and they’ll ask, 'What was that?' and (see) things they don’t like. In the past, if they saw something and said, 'I don't like that' then we would have to go back and change it, which costs the client and us and takes time."
Coupled with contours data from Google Street View, the customer has an accurate impression of how the house will look on the streetscape before they pick up the key.
With all that data, disaster recovery and contingency planning is top of mind for the builder.
Last August, RiverStone bought a new server that it mirrors offsite. Every few months, its IT reseller does a test recovery to ensure plan and backups work.
"We’ve found that they could get us back up and running – if we were to lose our server in the office – within a matter of two to three hours."
When it comes to desktops, staff needs inform Marshall. RiverStone has 15 desktops, four of which are OS X Macintoshes for drafting; its mobile fleet is six laptops, seven iPads and 20 iPhones.
"Draftees use Macs because they’re drawing so we decided that the Mac software is better for what they do," he says.
"There’s a number of estimators and schedulers that are office-based so they have old-school desktops and the supervisors have iPads and sales staff and client liaison staff have laptops."
And while the business uses software such as Illinois Tool Works' Databuild for estimating, variations in how building-industry trades work and other factors limit its usefulness in practice, he says.
"(Databuild) is probably a bit more advanced than an Excel spreadsheet and to do contract document control we've employed someone to build a piece of software for us that was compatible. (But) in terms of doing the calculations of how many bricks to deliver to a site, it's still manual." 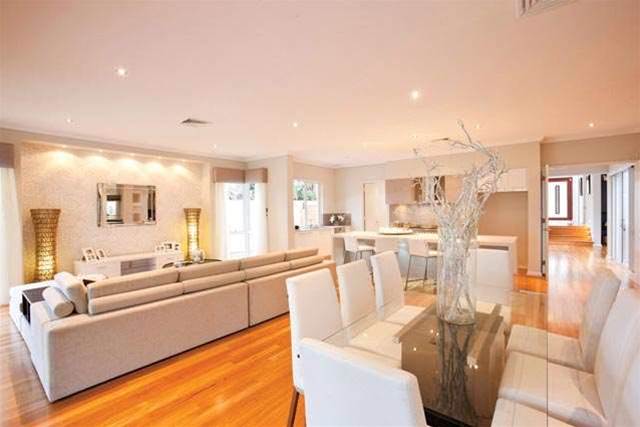 RiverStone has a blog for marketing and recently found a use for the latest social media darling, Pinterest, a service where users "pin" images to virtual notice boards they share with others [Ed note: This is the second company I have heard of this week that is using Pinterest in this way]. Users subscribe to each other’s boards in much the same way they follow friends on Facebook or subscribe on Twitter.
RiverStone's in-house interior designer Emily LeCras collaborates with clients through Pinterest boards to arrive at a vision of what their houses will look like.
Marshall says RiverStone has put a "toe in the water" with social media but most clients don't use it.
"But with Pinterest there's a practical benefit for our interior designer and clients. (LeCras) can go in and see what their inspirations are and use that to go to suppliers."
Looking to the future, Marshall is excited about the prospect of using augmented reality to simulate the look of a house in its native environment. In such a scenario, a project manager is onsite with the customer, streaming rendered 3D models to the iPad from the server, which would superimpose them on the scenery captured by the handheld device’s camera. By spinning and walking around the space, they see a window on what the house will look like in situ.
And Marshall wants more efficient document control and electronic conveying of documents. "Although we scan everything into our server, document control, which is a huge part of our business, is something we'd like to be more efficient and something we're always on the look out for.
"The residential building industry could really benefit through something that was a lot more sophisticated.  The investment in that side of it from people who built the software hasn’t been huge.
"If you look at how the drafting has evolved in the past 20 years from people drawing lines on a page and building models through hand and now doing everything in 3D on a computer – the other side of the business with the documentation hasn't evolved greatly." 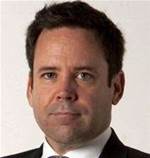 Nate Cochrane is a technology journalist, photographer and media consultant who contributes to the Sydney Morning Herald, among other publications. He was previously editor-in-chief for IT publications CRN Australia, SC Magazine and iTNews, published by Haymarket Group, as well as editing the NEXT IT section in The Age and Sydney Morning Herald newspapers.