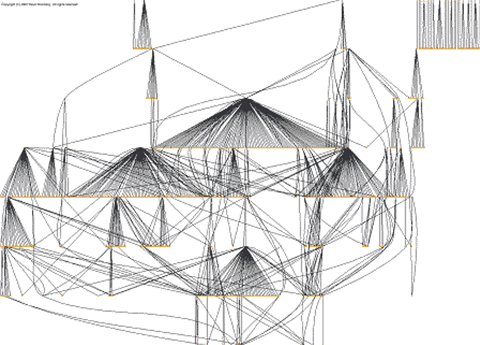 Page 4 of 4  |  Single page
Hardware for every occasion
The customised approach to networking is undoubtedly a great strength for businesses, but it’s also responsible for creating a dizzying array of products. Fortunately, most network hardware vendors are an understanding lot and will helpfully break down their catalogues into the types of functions offered by the device, as well as the size of the business it’s targeted at.

I have read and accept the privacy policy and terms and conditions and by submitting my email address I agree to receive the Business IT newsletter and receive special offers on behalf of Business IT, nextmedia and its valued partners. We will not share your details with third parties.
To help decipher the matrix, here’s a rundown of the most common network devices. Be sure to check out the relevant sections for more specific information on other devices, like VoIP or security.

Routers are a key component of any network. Fundamentally, a router’s job is to direct traffic between networks via their IP addresses, however most modern routers bundle in an array of extra features (like a firewall or VoIP port), and can act as a LAN ‘switch’ for computers on a small local network.

Smaller offices can likely make do with a simple, domestic multi-port wireless router. A possible scenario could be connecting two desktop PCs and a fileserver via its Ethernet ports, and then allowing any extra PCs or desktops to wirelessly connect. A larger business, or one anticipating growth, will want a router that supports extra services like VPN access for mobile employees. Furthermore, the combined router/switch combination won’t suffice – you’ll want to look at a dedicated switch.

Switches join the PCs on an individual network together. When information needs to pass between points on the network, it’s the switch that takes that data and finds its destination.

There are two broad types of switches: managed and unmanaged. Managed switches will let you configure it to optimise traffic, create ‘virtual’ LANs, filter MAC addresses, or monitor the ‘health’ of the network. Unmanaged switches won’t allow these administration features, but its reduced cost and easy installation make it suitable for small to medium businesses.

Note that a ‘hub’ will also do a similar thing, but its management of network traffic isn’t as sophisticated as a switch. Due to the falling cost of switches, there’s little reason to install a hub in a modern business.

Storage, in a networking context, refers to custom devices that can be connected directly to a network via an Ethernet port or a wireless connection. The range of network-attached storage (NAS) is as broad as it is deep, offering various capacities, management options, integrated fileserver software, and even USB ports. All-in-one NAS devices are often suitable for smaller offices, but larger businesses will want a device that can be customised with extra storage, RAID options, and other advanced features.

To truly flesh out your network, you’ll also want to add some enhancements. It could be something simple like bridging networks with a wireless access point, or you could hang a network-enabled camera off it for some do-it-yourself security. Always remember, however, that poorly considered ‘enhancements’ may have unintended consequences, like impacting network performance, or opening a hole that undermines your existing bullet-proof security regime. For this reason, always evaluate each piece of the network as it relates to everything else – not the other way around.

Ultimately, whichever path you choose to take with your network, always keep your business in mind. It’s just as easy to overspend on features you’ll never use, than it is to restrict your growth by buying only what’s necessary right now.

Q&A Ports of call
What are network ports and which ones do I need?
Think about your network as a collection of services – like email, a web server, an FTP site, a fileserver, and many more. If the network has a single point of access, how would it know to direct an incoming request to the right service?

Every modern network makes use of ‘ports’. Web servers, for example, use port 80 by default, and every time you put in a request to visit a website, your browser automatically attaches the port number to it. This ensures the request produces the right response, which in this case would be the web server sending through the web page as requested, rather than attempting to access the email server.

Unfortunately, ports aren’t too smart. They’ll let anyone have access to any particular service without question, posing a significant security risk to any network. It’s for this reason that firewalls exist, because just as ports grant access, they can also block it.

Determining which ports should be accessible is important when setting up your network. As a general rule, port blocking is one of the simplest and most effective ways to keep your network secure, and for this reason, the firewall should be set to block all inbound access, except for those services that require it. A company web server, for example, should allow port 80 connections through; and if your employees want remote VPN access via PPTP, you’ll want to have port 1723 open.

Note, however, that just because a port is open, doesn’t mean it’s automatically insecure – those wanting to make a VPN connection will still need a username and password, for example. Likewise, just because incoming connections to a port are blocked, doesn’t guarantee that a rogue piece of malware hasn’t initiated a connection from behind the firewall.
Return to Index
Previous Page
1 2 3 4 Single page
Tags:
networking
By Ed Dawson
May 1 2007
4:28PM