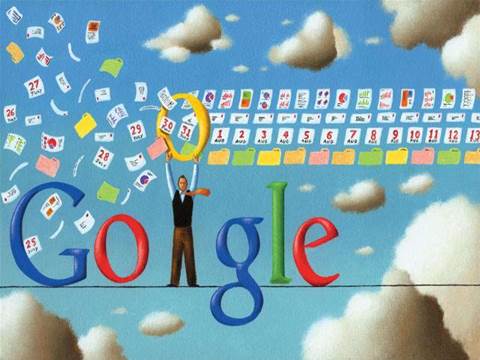 What does Google’s online office suite and core applications offer over the Microsoft alternative?

The network computer concept, as originally popularised by Oracle more than a decade ago, failed to make any headway largely because it came ahead of the broadband revolution. Well, that revolution has now arrived, and Google believes the time is right to revisit thin-client computing. Hence, the arrival of what’s been dubbed the “Google Office”: web-based spreadsheet, email, calendar and word-processing applications. But it isn’t just the broadband connectivity that’s spurred Google to make its move now. The arrival of technological advances such as AJAX has meant that in-browser applications can be built efficiently and with a responsive and user-friendly interface. Google has denied that it’s slowly putting together a web-based competitor to Microsoft Office, so what then is the strategy behind Google Mail, Calendar, Spreadsheets and Writely?

Let’s start by looking at the history of Google Office, the roots of which can
be traced back as far as 2002 with the launch of Google Labs. Paving the way for Google to explore beyond the realm of search, and based upon the innovative company policy of allowing employees to use as much as 20% of their paid time to work on their own projects, Google Labs quickly became a showcase for innovation. As well as providing end users with a glimpse at product prototypes, it gave developers important access to a large volume of feedback. It was via Google Labs and a private project that Gmail came into being, but not until 1 April 2004. This was the first Google Office application, even if Google itself had no real idea of the fact at the time. We had to wait nearly two years for it to get its Office act together and launch the core raft
Newsletter Signup

I have read and accept the privacy policy and terms and conditions and by submitting my email address I agree to receive the Business IT newsletter and receive special offers on behalf of Business IT, nextmedia and its valued partners. We will not share your details with third parties.
of Google Office applications.

One thing is for sure, this isn’t about free and powerful alternatives to Microsoft Office: if it were, then surely OpenOffice.org would have that market sewn up? Yet OpenOffice hasn’t taken the corporate or consumer world by storm, not in terms of denting Microsoft in any serious way. The fact that it hasn’t mimicked Firefox in gathering market share worthy of note seems to suggest that there isn’t as great a demand for a free Microsoft Office alternative as some would have us believe. Which leaves us wondering why Google Office should be any different.

Down to business
The market Google has spotted seems
to be the highly lucrative small business and home user one, hugely undervalued at present and ripe for exploitation. The big question is whether web applications are the appropriate products with which to target it. Office applications are, by their nature, complex beasts to develop for the desktop, let alone for the web.

However, Google appears to be working on the oft-repeated assumption that the average person uses no more than 10% of the functionality of any office suite application, a tiny subset of an increasingly bloated product. This allows Google to create the simple applications that are best suited to an online existence, while at the same time providing a riposte to the “it’s lightweight” argument.

Unfortunately for Google, what it hasn’t allowed for is the fact that
not everyone uses the same 10% functionality subset – one user’s bloat is another’s necessity. The result is that in its enthusiasm to be first to capture people’s attention, Google (like other developers of online applications) is in real danger of damaging any market for its product even before it really exists. By releasing highly immature applications that fail to deliver on the desktop-beating promise, Google risks putting off potential future users who simply won’t come back when the product is mature, when the market is ready and when the time is right. Already there’s growing evidence of online unease with the way Google labels everything a beta, remaining that way for years in some cases, almost as an excuse for explaining slow development, limited functionality and bugs.

Web 2.0 revenue
Analysts estimate that as much as half of all Microsoft revenue comes from the small to medium-sized business (SMB) sector, yet at the same time it doesn’t have anything like the same penetration as it does within larger enterprises. This suggests there’s a huge untapped and highly profitable market just waiting to be exploited. This is something that doesn’t appear to have escaped Microsoft as it rushes to get the whole “Office Live” concept up and running. Nor, of course, has it escaped Google.

For Microsoft, the gamble with online applications is a very real one. It could either sustain huge growth as the company enters a new Web 2.0-based era or see the company lose share as focus is taken away from the core OS and office application development part of its business.

For Google, there’s no gambling involved. It’s a popular misconception that its core business is search: Google is an advertising sales company, pure and simple. That’s where the revenue comes from; that’s what drives everything it does. Look at the SMB market and you see customers who can’t wait to spend money on the kind of contextual-based advertising Google offers. It’s a cost-effective and successful marketing strategy, because no-one else has the sheer online reach of Google in this regard.

Although it’s hard to imagine how contextual advertising space would work within a spreadsheet application, the model is much clearer when it comes to email, word processing and calendaring. At a more strategic level, Google is likely to be thinking about getting those small businesses to think outside of the existing Microsoft Office mindset. It’s estimated that Google earns approximately £8 per user every year in advertising revenue, and there are around 300 million users of Microsoft Word alone. If Google can convert just a small percentage of that to Writely, and expose them to other Google services
in the process, the bottom line is an increase in per-user advertising sales.