The dark art of paying less for mobile phone calls 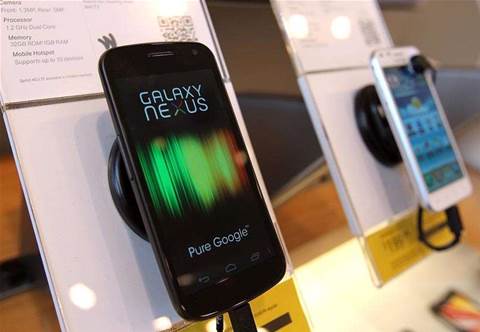 The tricks of the trade explained, like bundling, fleet plans and BYO handsets. Here is our guide to avoiding paying too much.

If your employees have work-issued mobiles, there’s a good chance you’ve been on the receiving end of phone bills that have run into the high hundreds.

Thankfully, there are lots of ways you can reduce this expense, that add up to big savings off your bottom line. There’s no one-size-fits all solution that’s guaranteed to work for every small business; the key is understanding the needs and typical usage of your employees and finding the phone plans that best suit them. 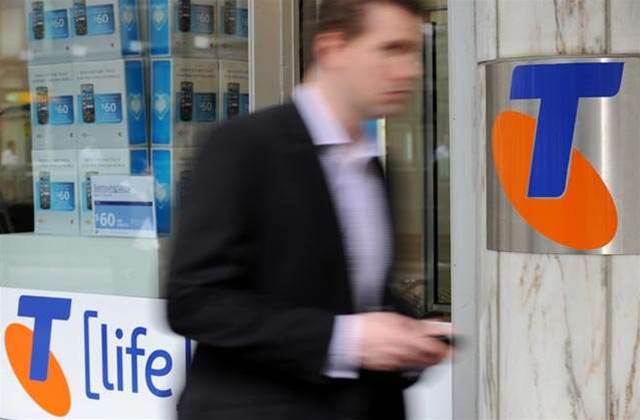 The first step toward reducing mobile phone expenditure, says Will Irving, group managing director at Telstra Business, is having a clear understanding of how your employees are using their work-issued mobile phones.

Rohan Ganeson, director of sales at Optus, agrees. “The most important thing when selecting a business mobile plan is understanding how you need to use this service in your business. Then, look for a plan that offers great value for your usage needs.”

It could be as simple as discovering that your employees are on plans that don’t come with enough call credit. Cameron Craig, co-founder and director of WhistleOut (an Australian comparison site for services like mobile phone, broadband and insurance), says that much of the bill shock related to mobile phone bills comes from an inexact understanding of how capped plans work.

What you don’t want do, he says, is go on a cheaper monthly plan that doesn’t provide your employees with enough credit, as this will end up coming back to bite you.

“Standard mobile phone plans work out at just over $1 per minute when you include flagfall. When you have a doubling of your usage one month, you may think your bill will double, but it won’t. When you have $600 of included value for $60 a month (which equates to roughly 600 minutes), another 600 minutes is $600, and your bill is going to end up being $660.”

By spending an extra $10 a month on the $59 cap, Mary cuts her phone bill by more than half, has predictable mobile costs of only $59 a month, and has enough wiggle room in the cap ($750 of included value) for days when she’s on the phone more than usual.

Craig recommends unlimited plans for salespeople on the road. “For the typical salesperson that’s required to contact at least 15 people a day, you don’t want them to be saying, ‘Okay, I can only contact seven people, because my phone allowance doesn’t allow me to contact 15’. The differential between an unlimited plan and 600 minutes in a plan is around $30, and the payback is always there in sales.”

Add-on packs can save you money 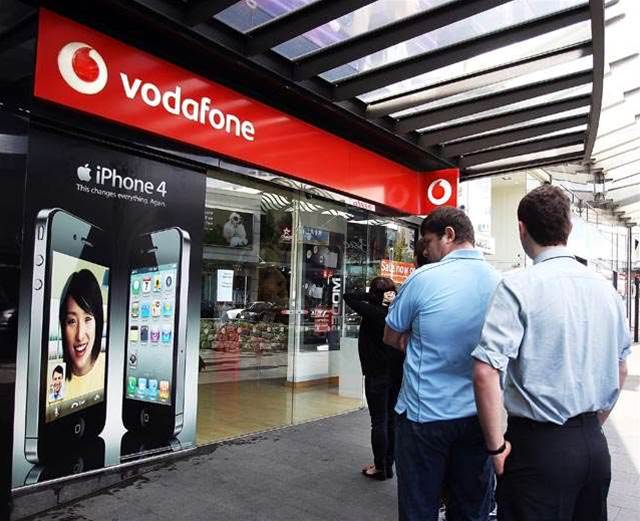 If certain workers are using up lots of data, making calls to overseas numbers, or using their phones overseas, there are add-on packs you can apply that work out to be far cheaper.

A good example is Internet data. Excess usage fees can blow out a bill if an employee uses up his monthly data allowance early, but there’s no need to upgrade to a higher cap if it only happens occasionally. It may be more practical to add a data pack.

The trick is staying on top of your employees’ data usage and adding the data pack before they exceed their monthly limit. Telstra and Optus automatically send you a text message when you reach 80% of your monthly usage; Vodafone offers a similar ‘balance alert’ feature, but you need to sign up for this manually. You can also install smartphone apps that monitor 3G data usage and warn you when you’re close to exceeding your limit.

Let’s say an employee is on an Optus $99 Business Timeless plan. The excess usage rate is 10c a megabyte. He receives a text message saying that he has reached 80% of his monthly data allowance. If he’s only a few days away from the end of his billing cycle, you could simply add a ‘yes’ Biz Data $9.99 plan to his plan on a month-to-month basis, which adds an extra 700MB of data to his monthly allowance. If he had used 700MB without that data pack, he would have incurred $70 in excess usage fees.

It might be cheaper to use your own handsets

Some carriers offer cheaper monthly rates if you bring your own handset. Telstra, for example, offers $30 off its $129 Business Mobile Maximiser plans – the cheapest plan that the carrier offers with unlimited calls. If you take up this deal and pay $99 per month instead of $129, you’ll save $720 per employee over the life of each 24-month contract. You can then invest less than half of that into buying smartphones outright for each employee, or pocket the entire saving if you already have handsets in your inventory.

A fleet plan could save you money 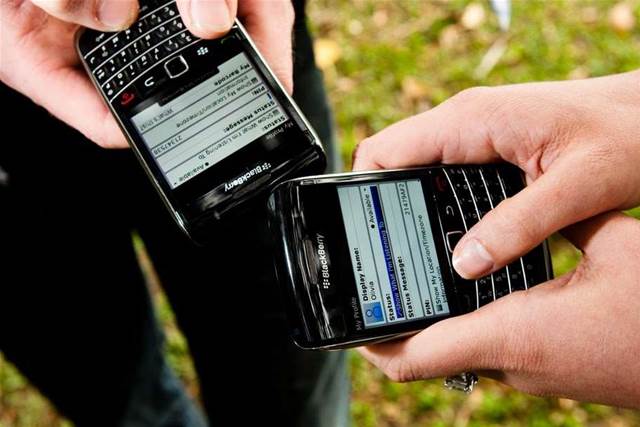 The benefit of going on a fleet plan is that you get free calls to other users on the same account, and in some instances, you’re able to share the call credit and data allowance as well. If your employees make a lot of calls to each other, moving to a fleet plan means you may be able to reduce your mobile spend by going on a lower-value cap.

The best fleet plans for small business are the ones that combine free calls between users on the same account with a generous allowance of credit. Telstra’s $49 Business Mobile Maximiser plan is a good example. If one in five calls are employees talking to each other, and they’re making five calls a day for roughly five minutes each, you’ll save $150 worth of calls per month for each employee. 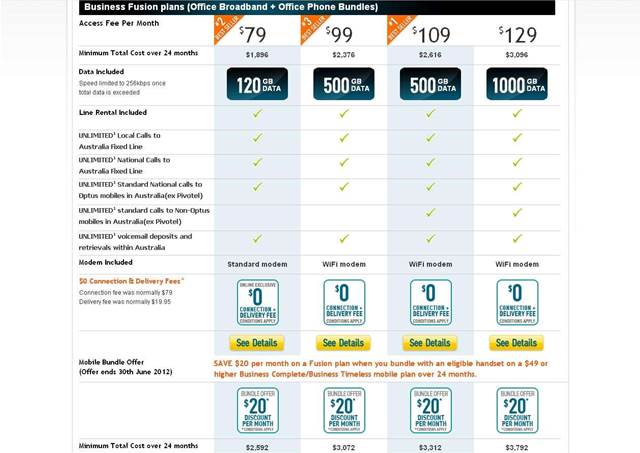 Bundling your mobile phone bill with other services offered by that provider either saves money off your bill or gets you special perks that would otherwise cost you money. If you want a mobile phone along with a mobile broadband modem or a tablet, you can also find deals that bundle the two together.

Optus stands out as a provider with plenty of bundles on offer. You can, for example, get $20 off a Business Fusion plan (which combines office broadband and office phone services) if you bundle it with a $49 (or higher) eligible Optus mobile plan, and the plan includes unlimited calls to fixed lines and mobiles. Another Optus bundle gives you a free 50GB Business Broadband service (worth $59 per month separately) if you bundle it with an Optus $89 Business Timeless plan for 24 months and choose the HTC One X as the free handset. Optus’ Business Smart fleet plans also give you free 10-minute calls to three nominated numbers if you combine it with an Optus Business Phone or Business Broadband service.

What are the options?

Once you’re armed with a clear idea of what your employees’ needs are, the next step is checking that any plan you consider not only covers those needs, but also has enough wiggle room to accommodate months when their usage spikes.

You can always move up to a higher-value plan without penalty if your employees end up using their phones more than anticipated, but it’s worth bearing in mind that picking the right plan up-front means you can take advantage of better handset subsidies.

Coverage is something you should think about if your employees travel outside of the capital cities, and this may affect the carrier you decide on. All of the carriers have coverage maps on their websites that show you the areas covered by their networks, and the prices of each carrier generally reflect the reach of their network (ie. Telstra being the most expensive and having the widest coverage, followed by Optus, and then Vodafone).

If you’re attracted by the low prices offered by Vodafone but you’re not sure whether you’ll get satisfactory coverage, you can take advantage of the carrier’s network guarantee, which lets you break a contract within 30 days if you’re not happy with the service.