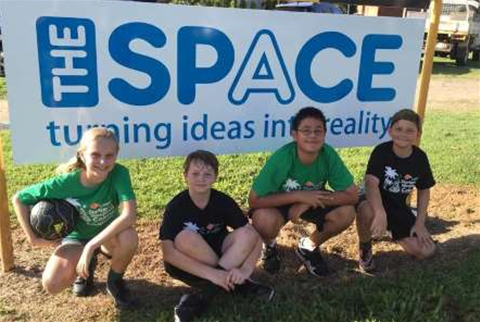 Meeting a fundraising target on a crowdfunding site such as Kickstarter is a big achievement for any up-and-coming entrepreneur. But in the case of one new Australian app, what’s even more amazing is that three out of the four team members are still in primary school.

That’s the incredible story behind an app called PowerShot, which measures how fast you can kick, hit or throw a ball. Along with measuring statistics, it allows users to share, compare and compete with others.

With some encouragement from theSPACE ‎co-founder and CEO Troy Haines, Bairstow pitched his idea for PowerShot and then recruited his teammates to help bring the app to life.

“We were at a startup weekend, where you can pitch random ideas to try and build your app. Corey, Elliott and I were there, and Elliott had this idea for PowerShot that he wanted to present because he was a bit nervous,” Howieson said.

“Corey and I encouraged him to present in front of everyone, and we really liked what his idea was, so we decided to work together to get the app on the market. Jess came on a bit later on to help us.”

After the event the young entrepreneurs began meeting once a week with business mentors, including Nanthaniel and Jamie Armer, to flesh out their idea.

The next big step was validating their concept, which they did through a Kickstarter campaign where they set a target of raising $5000 in 30 days.

“For Kickstarter we raised $5377 overall. Our target was $5000, so we were very happy with the amount that we raised overall. We sent out prizes and merchandise for people who donated,” Dent said.

Lending a helping hand on the project is James Cook University lecturer Dr Jason Holdsworth, who encouraged IT students Jess McKenzie and Tyler Harris to help the kids learn how to code.

“We got involved through one of our lecturers, and got pretty excited about it – anything that involves mobile development is exciting for us, and the opportunity to help a bunch of smart kids and pass on the methods so they can become like us,” McKenzie said.

The uni students are also helping the team to develop controlled tests so they can measure the accuracy of the app.

“We’re teaching them the foundations of coding and the basics behind it. So we’re doing weekly tutorials and exercises, different quizzes and fun applications,” Harris said.

The app is now at the alpha stage, with testing focused on soccer balls. The plan is to enhance it further to make sure it works with all different ball types before releasing the finished product through the Apple App Store.

“For the first few versions it will be on iOS only, but once we have that stable we’ll move on to Android as well,” Dent said.

Dent’s advice for anyone looking to follow in the PowerShot team’s footsteps is to remember that nothing’s impossible, with Howieson adding that teamwork is the key to success.

“Be persistent with what you’re doing. Don’t just give up on it if everything isn’t going your way straight away. We had setbacks a couple of times, but we just kept on moving on from there,” May said.