Run your slideshow on a touchscreen tablet using Microsoft PowerPoint 2013 and it has the potential to transform your performance. Read the review.

Few people actually enjoy having to author, deliver or sit through a PowerPoint presentation, but whatever area of business you’re in, it’s likely to be an important part of your software toolkit.
PowerPoint 2013 is an all-round upgrade, with improvements across the board, aimed at helping users deliver more effective presentations as well as create attractive slides.
Newsletter Signup

I have read and accept the privacy policy and terms and conditions and by submitting my email address I agree to receive the Business IT newsletter and receive special offers on behalf of Business IT, nextmedia and its valued partners. We will not share your details with third parties.
Presenter View 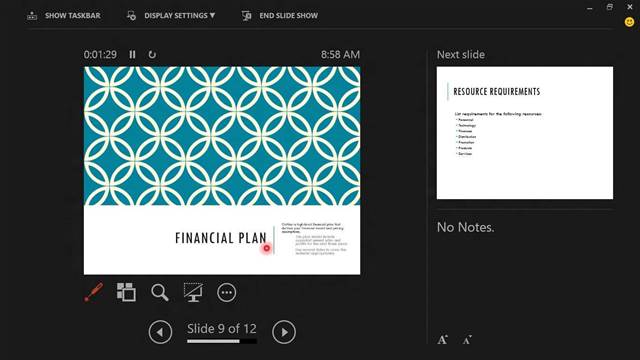 Click to enlarge
At the launch, the big “new” feature Microsoft chose to focus on was Presenter View. In fact, it isn’t new at all – but it’s received a major, Metro-style makeover in this release. It’s far slicker than what went before, giving presenters a more streamlined, blacked out, cockpit-style view from which to control the progress of their presentations.
For those who aren’t familiar with Presenter View, it’s aimed at those who deliver presentations on a big screen or projector. Instead of simply mirroring the current slide on each display, it shows a control screen to the presenter, with the current slide in a box on the left, the next slide as a smaller thumbnail in the top right of the screen, and any notes you might have made about the current slide tucked in the bottom right. It’s a useful feature that allows presenters to mentally prepare for the next slide before actually getting to it.
It isn’t all about forward planning, though. The Presenter View also plays host to a number of other useful controls and tools to help add interest to what may otherwise be flat, lifeless slides, and here further improvements have been made. Click the Pen icon and you’ll see a laser pointer mode has been added to the existing highlighter and Pen tools – useful for drawing your audience’s attention to specific data on a graph, for example, or highlighting a bullet point in a list.
Tapping the icon next to the pen brings up the Navigation grid – another new feature that gives an overview of all the slides in your presentation. It replaces the old filmstrip view, and should make it a little easier to navigate back and forth between slides.
Next is the Slide Zoom, which allows presenters to hone in on a particular area of a slide, either by pinching with a finger or clicking with the mouse. There’s a shortcut icon for blanking the screen, and an options menu gives access to, among other things, a Slide Show Help box listing keyboard shortcuts.
UI and touch 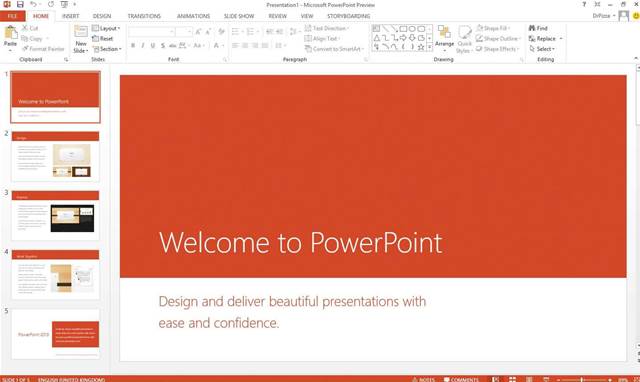 Click to enlarge
The other big change, as with the rest of the Office 2013 applications, is the new look and feel, with its flat, sharp-edged windows and touch-enhanced collapsing ribbon.
Whether this appeals or not depends largely on personal taste. Far more important are the implications the redesign has for touch. In terms of slide creation, our comments remain the same as for Word, Excel and the rest: Microsoft hasn’t done enough. Sure, the ability to zoom in and pan around is nice, but start to edit an existing presentation with only your fingers and you’ll quickly become frustrated.
Despite the new touch mode, which enlarges some elements and spaces out buttons on the ribbon, many elements of the UI remain small and fiddly: the windowing controls in the top-right corner; the zoom slider in the bottom right; and, bizarrely, the touch mode switch itself, which is hidden behind the tiniest dropdown imaginable.
In another odd move, many of PowerPoint’s dialog boxes have been completely done away with and replaced by a pane that smoothly appears from the right-hand side. We like this approach, but it isn’t consistent with the other Office apps, and could cause confusion. Neither Microsoft Word nor Excel uses this approach.
For presenting, it’s a different story. Run your slideshow on a touchscreen tablet and it has the potential to transform your performance. You can swipe to navigate back and forth, and pinch and tap directly on a slide to zoom in leaving you to focus your attention on the presentation.
Design and layout 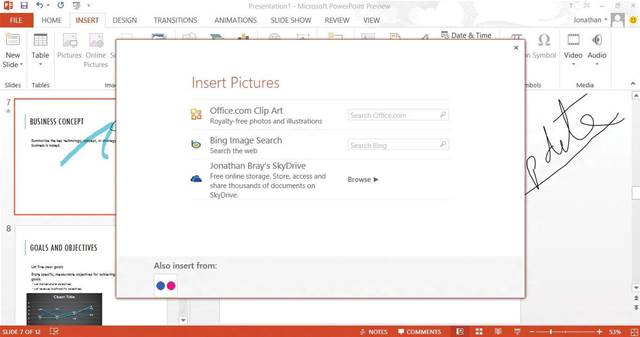 Click to enlarge
None of this really matters, though, unless you can create compelling slides in the first place, and Microsoft has provided a number of tools to make things easier.
First on the list of improvements is a library of new templates designed specifically for 16:9 format screens – a long overdue introduction that will be welcomed by users of modern laptops and tablets. All the core templates that appear on the new-style welcome splashscreen are compatible with this format, and many existing templates on Office.com, which can be browsed or searched directly from the splashscreen, have been converted too.
Modifying templates is easier as well, thanks to improved layout tools. PowerPoint’s Smart guides allow you to dynamically align elements such as pictures, shapes and text boxes by simply dragging them around the slide. As you go, vertical and horizontal dotted lines appear and disappear indicating alignment, allowing you to snap those elements into position. This isn’t a new feature, but previously only shapes could be aligned in this way.
Elsewhere, Microsoft has added an eyedropper, making colour-matching between elements easier. Adding visual content is simpler with PowerPoint 2013, with tools for searching for and embedding online video and pictures from the web. As with Word, PowerPoint users can comb through a number of sources, including Bing search, Office.com, Flickr and YouTube (although embedded online videos refused to play when we tested them).
Finally, each core theme provided with the installation is also now available in a series of different “Variants” – essentially, this means you can change the colour of the current theme, with coloured backgrounds, text headings and other elements all changing too.
Sharing and collaboration 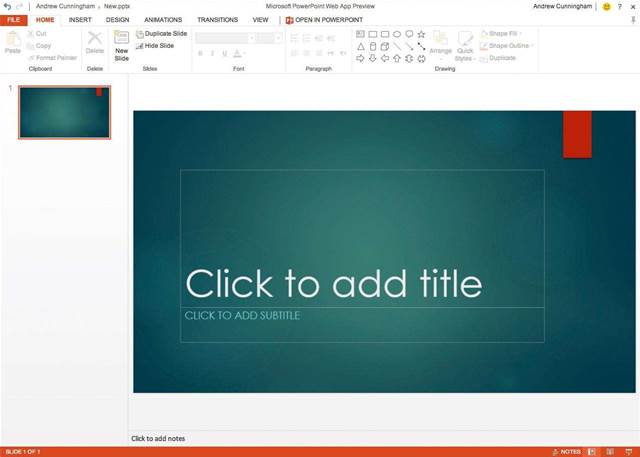 Click to enlarge
PowerPoint 2013 also shares other Office applications’ focus on the cloud, which brings improved sharing and collaboration tools to the table.
The commenting system sees an upgrade similar to Word’s, with comments indicated by a small speech bubble, inline replies and inking capabilities. Microsoft’s Presence system also works in comments, indicating users’ availability for chat sessions via the Lync corporate messaging system.
Present Online, a feature that allows you to deliver slideshows over the web, has also been enhanced. This is a free service; it’s a remarkably powerful tool. Although some advanced features are unavailable – the laser pointer and highlighting tools, for example, and animated transitions are replaced by a simple fade – you can still control presentations using Presenter View, and even edit slides while you go.
Finally, presentations can also be worked on by more than one person at the same time, either using the desktop app connected to SkyDrive or via the PowerPoint Web App. That’s the theory, at least – during testing, we failed to make this work smoothly.
Verdict
This is a major overhaul for PowerPoint, and features plenty of welcome improvements aside from the cosmetic Metro-style changes. The Presenter View is a revelation, and there’s a host of smaller, equally effective improvements, from better templates to more efficient layout and editing tools.
And when it comes to delivering those slides in front of an audience, Microsoft’s touch enhancements really do work, giving presenters more tools and control than ever before. Don’t imagine, though, that when it comes to editing and creating slideshows you’re going to be able to shed your keyboard and mouse just yet. 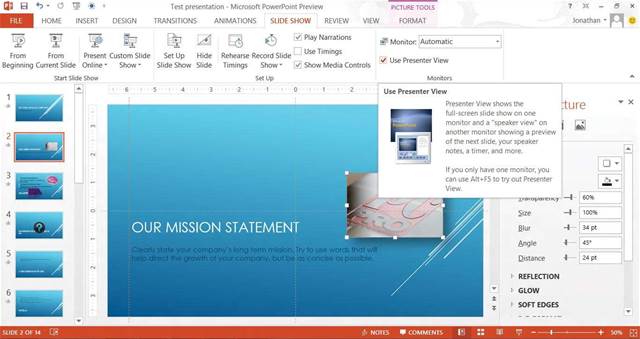 1 Delivering a presentation using the Presenter View opens up a number of new tools. To activate it you’ll need to have a second display connected to your laptop or tablet. Click on the Slide Show ribbon tab and tick the Use Presenter View checkbox on the right-hand side. 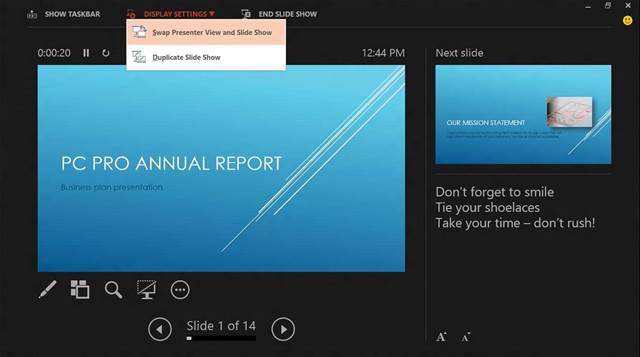 2 Start the Slide Show by pressing F5, or clicking/tapping the icon in the Quick Access toolbar, and you’ll see the Presenter View displayed on one screen and your first slide on the other. If the Presenter View is on the wrong screen, simply hit the Display Settings menu and swap them. 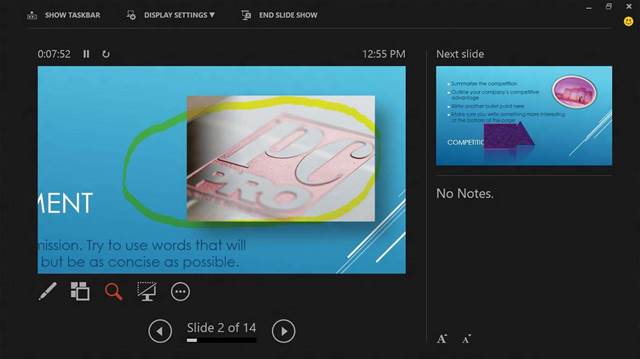 3 You can now use Presenter View to zoom in with a pinch, point out areas of the screen or navigate to a later or earlier slide. Experiment with the controls found beneath the current slide view on the left-hand side of the screen.
Copyright © Alphr, Dennis Publishing
Tags:
169 2013 cloud office 2013 powerpoint present online presenter view projector review ribbon software tablet
By Barry Collins
Jonathan Bray
Tim Danton
Oct 16 2012
4:42PM