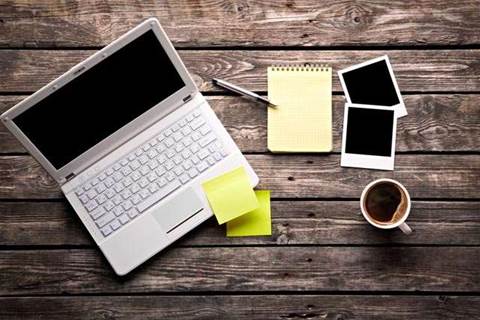 Need a good list-taking program? We look at whether Microsoft's new OneNote 2013 is worth getting.

It may not be a household name, but OneNote has built up a hard-core following in the years since it was first introduced to Office back in 2003.

Its freeform note entry, automatic saving, and the later introduction of linked notes and online collaboration in 2010, endeared it to note-takers.
Newsletter Signup

I have read and accept the privacy policy and terms and conditions and by submitting my email address I agree to receive the Business IT newsletter and receive special offers on behalf of Business IT, nextmedia and its valued partners. We will not share your details with third parties.
With online and app-based upstarts such as Evernote increasingly encroaching on its patch, OneNote needs to stage a fight-back. It starts as we’ve come to expect, with the new Metro-inspired UI seeming to herald a dramatically different piece of software. The reality once you’ve peered past the new interface, however, is that it’s business as usual for OneNote.
The OneNote Interface 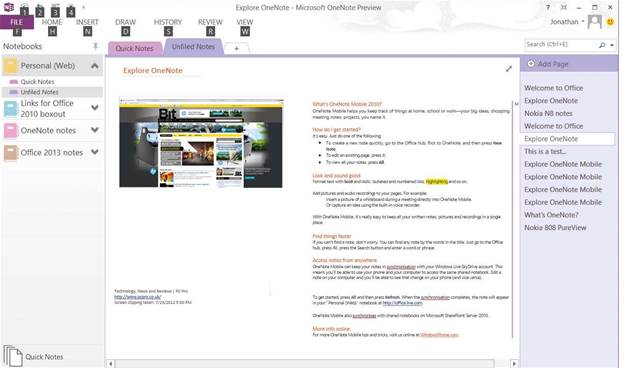 Look closely at the redesigned ribbon toolbar and you’ll find it plays host to the same tools as before, although there has been a little reorganisation. The Share menu, for example, has been replaced with the History tab, and some tools moved onto the Home tab.
The user interface is organised in the familiar way, too, with a handful of cosmetic alterations. Notes take up the majority of the working screen area – the panel for navigating pages within notebooks remains to the right – with a series of section tabs running along the top and page navigation down the right.
The Notebooks navigation panel works a little differently: it used to live in a collapsible panel to the left of the screen, but has now been moved into a dropdown, launched from a small downward-pointing arrow below the current notebook title.
Where there are new features, they’re minor. The ability to create Excel tables directly in OneNote is more useful than the old flat table tool. Embedded spreadsheets and Visio diagrams can now be edited, with changes reflected in the notebook automatically.
And there’s extended support for touch. As with the rest of the new Office apps, tapping a small button in the Quick Access Toolbar lets you add the touch mode button, which enlarges some toolbar elements and spaces out icons on the ribbon.
OneNote for Metro 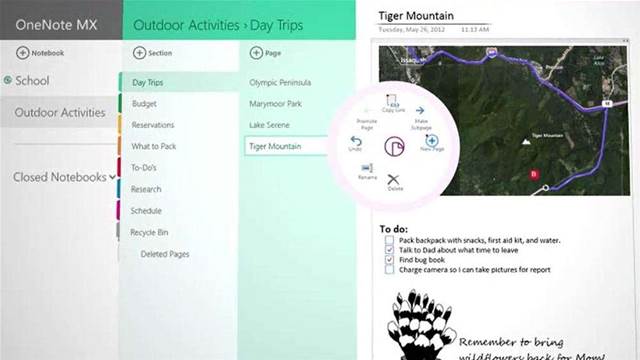 OneNote MX. Image source: Microsoft.
The most significant development with OneNote surrounds not new features, but a new addition to the OneNote family. Alongside Office 2013 for desktop will debut a separate Metro app (Metro apps are those designed for Windows 8's tiled menu system) called OneNote MX, and the most interesting aspect of this app is its menu system. Dubbed the radial menu, this is a turbo-charged menu, with formatting such as font type and size arranged in a circle, and accessed via a button that pops up whenever you tap an item or highlight text.
It looks unusual, and gives access to a huge range of controls in a very small space; it’s no coincidence that this circular menu fits within the narrower part of a Windows 8 Metro split screen. But for a system aimed at operation by touch, some of the buttons are surprisingly small and fiddly. We hope it’s refined further by launch time.
Aside from the radial menu, OneNote MX features very different navigation and search facilities. Making your way around OneNote’s overly-complicated organisational structure (notebooks, sections and pages) is performed via a series of panels that can be pulled out from the left-hand side of the screen. These can be hidden to the point where only links to pages in the current notebook show when you’re working, and they disappear completely when the app is split-screened in Windows 8.
As with most Metro apps, searches are performed using the Windows 8 Search "Charm" - the menu you access with a swipe of a finger from the right or by shunting the mouse pointer into the top right-hand corner of the screen.
Elsewhere, though, it’s disappointing. Functionally, OneNote MX echoes many of the desktop version’s features: it links to the cloud via SkyDrive or SharePoint, allowing synchronised access to notes on whatever device you’re using; it allows you to type, insert pictures, and scrawl notes with a finger or stylus. But certain key features are missing. It won’t recognise and index text in photos when they’re inserted, and you can’t record audio notes or make quick screen clippings.
Verdict
We hope there’s more to come from OneNote MX when the final version ships because elsewhere it’s pretty slim pickings. And with the desktop version also gaining few significant features of note, it looks like OneNote enthusiasts are going to be disappointed with what Office 2013 brings.
Copyright © Alphr, Dennis Publishing
Tags:
2013 evernote notes office 2013 onenote review software
By Jonathan Bray
Barry Collins
Tim Danton
Oct 22 2012
4:08PM