As we mentioned above, the sheer volume of distros means that users are spoilt for choice in terms of design. There are distros that visually emulate both OSX and Windows, as well as stripped-down systems for those that favour minimalism. 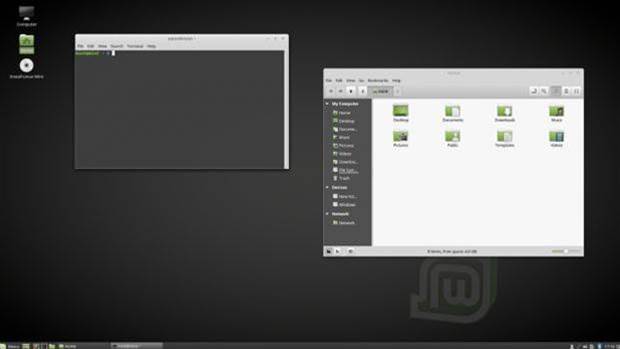 Mint is a well-designed Linux distro.

Some, of course, are visually dire, but that's the risk of community-created software. Most of the major distros, however, are very well designed, particularly corporate-backed offerings such as Ubuntu and Fedora.

In the end, a lot of it comes down to personal taste. We should mention, though, that many Linux variants will require an adjustment period for those familiar with Windows or OSX. They’re also just that little bit less polished when compared with the big boys.

Security is a cornerstone of the Linux OS, and one of the principal reasons for its popularity among the IT community. This reputation is well deserved, and stems from a number of contributing factors.

One of the most effective ways Linux secures its systems is through privileges. Linux does not grant full administrator – or ‘root’ – access to user accounts by default, whereas Windows does. Instead, accounts are usually lower-level, and have no privileges within the wider system.

This means that when a virus gets in, the damage it can do is limited, and restricted mainly to files and folders on the individual machine. This can be greatly beneficial from a damage control standpoint, since it’s far easier to simply replace one machine than scour the entire network for malware traces.

There’s also the fact that open source code such as Linux software is generally thought to be more secure and better maintained, due to the amount of people scanning it for flaws. Similar to the ‘infinite monkeys’ principal, ‘Linus’ Law’ (named after Torvalds), states that “given enough eyeballs, all bugs are shallow”.

Possibly most important, however, is the issue of compatibility. As we mentioned earlier, virtually all software is written for Windows, and this also applies to malware.

Given that the number of Windows machines in the world vastly outnumbers the number of Linux ones, cyber attacks targeting Microsoft’s OS are much more likely to succeed, and therefore much more worthwhile prospects for threat actors.

This isn’t to say that Linux machines are totally immune from being targeted, of course, but statistically, you’re probably safer than with Windows, provided you stick to best practice.

Microsoft’s ubiquitous OS can be called many things, but ‘lightweight and speedy’ is not one of them. Windows has an unfortunate tendency towards bloating and sluggishness, and can very quickly feel outdated if not properly maintained.

Linux is much quicker, on the whole. The OS itself is less demanding, and many distros sacrifice any visual bells and whistles to ensure that performance is the absolute best it can be. Opting for one of these builds can be an excellent way to bring an ailing older laptop back up to its former speed.

There are, of course, numerous ways to ensure that a Windows PC or laptop remains decently nippy over the course of its lifespan, but Linux computers will on average outperform them over a longer period.

Next: Ease of use and final verdict.