Is it worth using DesignCrowd to get my presentation professionally designed? 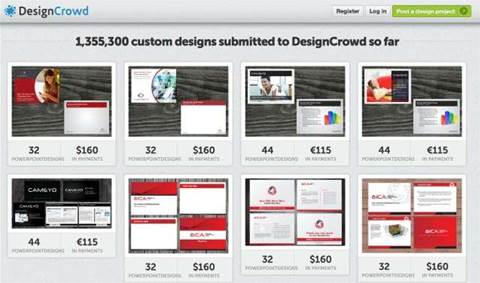 We road-tested DesignCrowd to get our sales presentation made. The results are impressive but if you think crowdsourcing is about bottom-shelf pricing you will be disappointed.

Most of us aren't very good at design, although if you spend any time in business the chances are that you will pick up some half decent PowerPoint skills.
But some presentations are too important - such as sales pitches or equity raisings - to be left to chance and a small investment in graphic design can make a big difference to the outcome.
Newsletter Signup

I have read and accept the privacy policy and terms and conditions and by submitting my email address I agree to receive the Business IT newsletter and receive special offers on behalf of Business IT, nextmedia and its valued partners. We will not share your details with third parties.
Larger companies will often have a graphic artist in their marketing department, but for you that is probably a luxury. That means if you are going to hire one, you need to think about how to get the best return from an investment that can run to several hundred dollars.
Increasingly sites like Freelancer, oDesk, and DesignCrowd offer you the chance pitch your work to potentially hundreds of talented designers quickly and effectively. So we decided to test one out.

This month digital intelligence service Which-50 road-tested the DesignCrowd service - which like oDesk givers you the chance to source work from designers the world over. Unlike oDesk it uses a 'competition model' where designers respond to a pitch with samples of their work and you choose the winning bid which then get's the lion's share of the loot.
Setting up a DesignCrowd account and uploading your pitch is a simple four step exercise. You outline the project details, provide a creative brief - don't worry, the site steps you through this process - choose your payment options which start at about $280 and then confirm your order. The amount you pay is contingent upon the amount of invites you send and any extras which you choose. 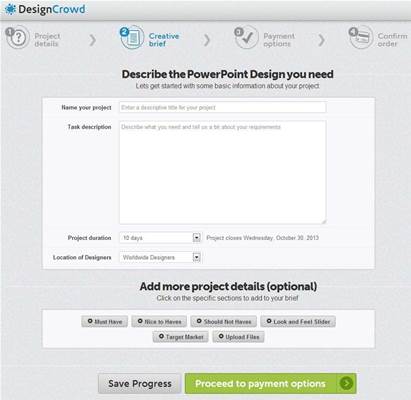 During the process you also set deadlines for the work, and you can extend the deadline once the project is underway.

A tip about payment

One cautionary note: People get all sorts of strange ideas about crowdsourcing services like DesignCrowd. The most common one being around price. If you think you are going to get Agency quality presentations for penny dreadful prices you are going to be disappointed. On balance it probably is a little cheaper, but in our experience not so much that it's worth the effort if that is your only criteria. You are better off approaching it from the angle of more bang for about the same buck.
Here's a tip. One of the options available to you is to guarantee a payment to the winner. Presumably this is to stop people posting jobs, getting a plethora of responses, simply thieving the ones they like best and then declining to choose a winner.
My experience made it pretty clear that a lot of designers will not respond unless the winner is guaranteed. In fact I received a number of messages from designers to that effect – basically they said would be willing to respond but only after the guarenteed payment option was selected.
We were probably over half way through the competition before we decided to select that option – mostly because I couldn't get a straight answer from anyone about what a guaranteed payment meant. Eventually I emailed someone I know at the company who confirmed my understanding.
It was after this that my whole experience changed.
Until that time we were only mildly satisfied with the responses we were getting.
However in the next few three days we received three great submissions which were vastly superior to those we had received already - including the winning design from a graphic artist in Austin, Texas named David Belt.
David's designs weren't just the best by a small margin - they were clearly better than everything else. What's more, David ignored a few of my slides and invented a few of his own. That might put a few people off, but for me it was simply confirmation that he was confident in his work and willing to help save me from myself.

Let's take a look at three before and after screenshots

First up here is the cover page I submitted. PowerPoint covers are always a tricky issue. There's no second chance at a first impression but they are basically just eye candy to set the tone and remind people who you are and why you are here.
BEFORE 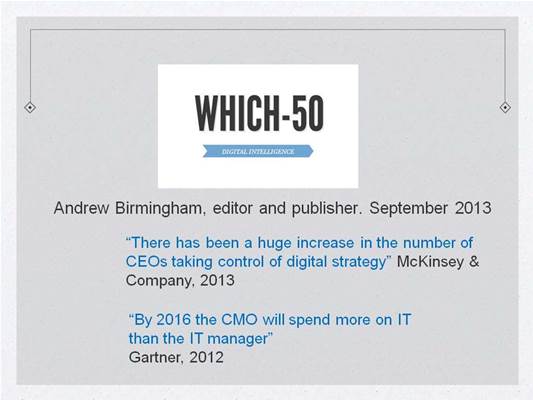 and here David's design.
AFTER 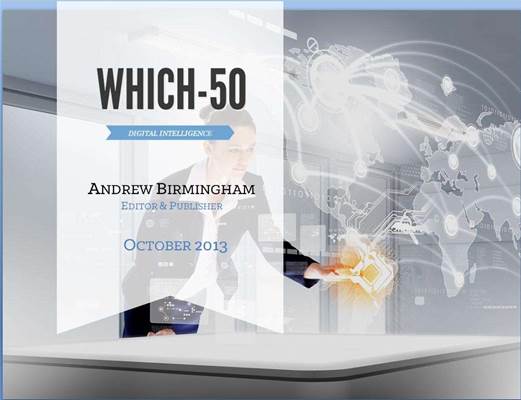 Secondly, Which-50 stories have been picked up by a number of major international news outlets like the Wall Street Journal and the Huffington Post, and earlier this year Yahoo's CEO's Marissa Mayer used a Which-50 story on her personal Tumblr blog to celebrate the completion of Yahoo's Tumblr acquisition. We wanted to highlight this in our presentation as a way of establishing the credibility of the brand.
BEFORE 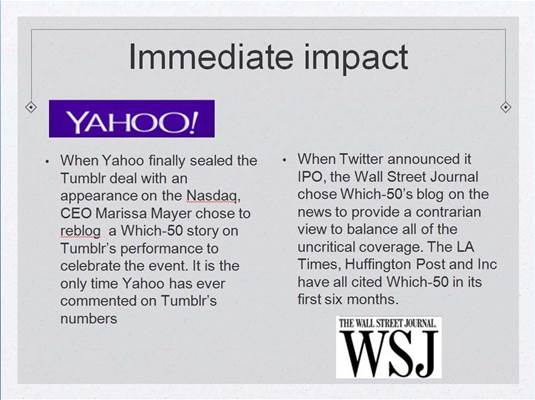 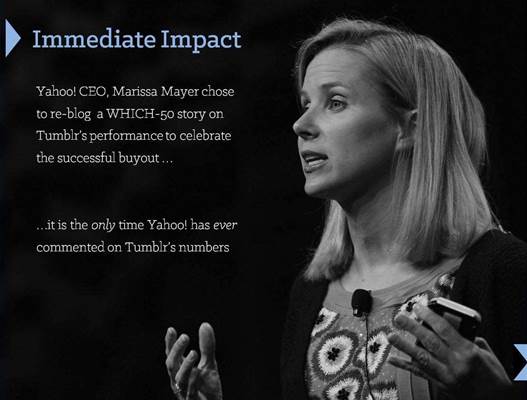 As you can see from the before and after images, it's no contest. Importantly, David even provided the license for the use of the image, and that matters because as publishers we tend to be very careful about using other's artistic work.
Finally, Which-50's business model operates on what is known as the Doltone model for content. We'll spare you a convoluted description. In simple terms instead of viewing content as a linear idea running from editorial at one end to advertising at the other, where the debate is whether the publisher or the client has control - the Doltone model puts the customer at the heart of the conversation and let's them apply their own filters.
This is critical to the Which-50 model so this slide really was the money shot.
BEFORE 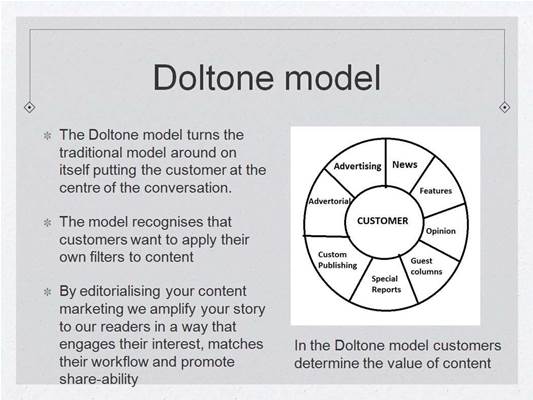 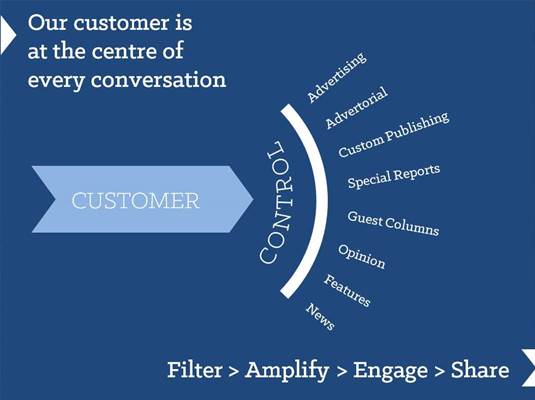 David's design looked nothing like the mud map we have given him, which is a pretty ballsy call on his part. I personally spent a whole evening mulling over what he had done, and tested the idea with a few colleagues before deciding in the end that his approach was better.

Ladies and gentlemen we have a winner

We finalised the details, arranged the payment and David provided not only the designs but also the necessary font licenses and a how-to guide explaining how to update the graphs in the presentation. After all, we don't want to keep paying designers every month when the data changes.
After the project was over I told David I was writing a story about my experience and asked him about using DesignCrowd from the perspective of a designer.
David is a full time graphic designer who also pursues work through DesignCrowd to make some extra money. He has been using the service for a year now.
His advice for people using the service to source talent is that once you finally find a designer you want to work with let them do their job, and trust their instincts and professionalism. "Don't describe the solution you have in your mind; describe the problem you need to solve and let the designers come up with solutions so as not to limit the number of designs you receive," he says.
He says the biggest mistake people make when posting a job on DesignCrowd is not providing a clear brief: "The designer are left unsure about what the specific task is and what are the hard constraints."
He also suggests providing any source material such as logos up front and to make sure they are of sufficient quality and resolution.
During our DesignCrowd competition I spoke to a number of designers about their experience, but this was without identifying myself as a journalist, so it's not fair to quote them. However, the consistent feedback I received was that it pays to be polite. The detachment of the services like DesignCrowd means that people feel they can be unnecessarily blunt and harsh in their criticism.
So the rule is a bit like email. Don't say anything you wouldn't be willing to say face to face. Remember you want the best outcome possible and you will get that if your designers are fully engaged.
Finally, DesignCrowd was straight forward and easy to use, although it took me a little while to get used to the navigation. That meant that on a couple of occasions I availed myself of customer support - and I also wanted to check how responsive they were for this story. The good thing is the support was quick, appropriate and helpful. After all it's not the problem you remember but how it gets sorted.
All up, to get a 41 slide PowerPoint presentation designed and delivered cost me $495 of which the bulk goes the designer. I probably spent about two to three hours of my own time reviewing submissions from designers and providing feedback, and that's a hidden cost you should also consider, depending on your availability. Time is, as they say, money.
Andrew Birmingham is the editor and publisher of digital intelligence service Which-50. He also writes about technology issues for Haymarket Media.
Copyright © BIT (Business IT). All rights reserved.
Tags:
crowdsourcing designcrowd designer powerpoint presentation professional services
By Andrew Birmingham
Oct 21 2013
6:44AM