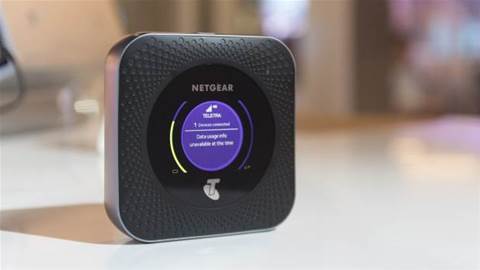 With the telco launching the world’s first 1Gbps LTE network, we reveal the results of early (controlled) testing and investigate what it really means for users.

Telstra has had a tough week, with a fire at its Chatswood exchange in Sydney disrupting many services, followed the next day by a cut cable downing services in Perth.

However, it wasn’t all bad news from Australia’s largest telco. As we reported earlier this week, the ‘world’s first gigabit’ mobile router – Netgear’s Nighthawk M1 – is coming to Telstra, supporting download speeds of up 1 gigabit per second (Gbps) .

But note that the router won’t reach its best speeds just anywhere on Telstra’s 4G network – you’ll need to be on the telco’s gigabit LTE (Long-Term Evolution) network, which initially will be in the Sydney, Melbourne and Brisbane CBDs “and about a one kilometre fringe” around the CBDs, a Telstra executive told iTnews.

The gigabit network will be rolled out in these three areas in mid-February, followed by Adelaide and Perth later this year.

Telstra is using a technique called “LTE Advanced carrier aggregation” to achieve these speeds. That basically means it uses multiple ‘carriers’ (frequency bands or parts of the spectrum) together, and it requires a device like the Nighthawk M1 that supports the technique.

“It’s the largest ever step increase,” in the speed mobile download speed, said Wright, “and the first time we’ve done a big step increase on the uplink” to a theoretical maximum 150Mbps for uploads.

That’s seriously impressive stuff. It’s many times faster than the typical fixed-line broadband connection, and what’s even more staggering is that these speeds were achieved while streaming live 4K 360-degree video over the same network from the event. Without the video stream impinging on performance, we saw the same test achieve 932Mbps download and 128Mbps upload speeds.

To put that in a little more context, that’s enough to run 37 simultaneous 4K Netflix streams – over a cellular connection. 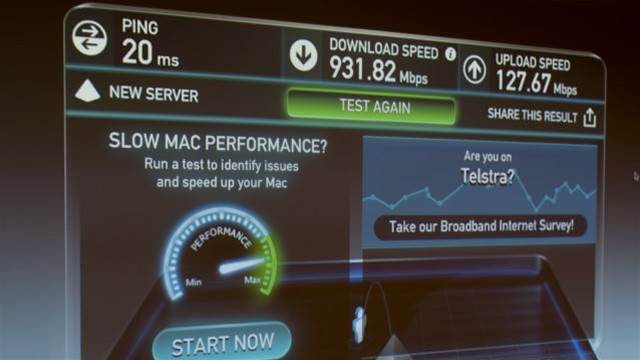 Of course, this is in a controlled environment at a launch event designed to show off the technology at its best. Once users start to use the network in anger, real-world speeds will be significantly slower. In tests, however, Telstra said it was seeing download speeds of up to 300Mbps and upload speeds up to 90Mbps, which is still enough to download a 3GB file in around a minute and a half.

You may not necessarily need the likes of the Nighthawk M1 to benefit from gigabit LTE either. One of the key technologies behind it is 4x4 MIMO (multiple-input and multiple-output), which means the device has four transmitters and four receivers. Sony’s Xperia XZ smartphone, for example, has 4x4 MIMO antenna arrays, so owners of these phones should see a speed bump when accessing the gigabit LTE network.

A thousand megabits per second is one helluva lot of bandwidth, and more than most people can get on fixed-line installations right now; the key question is, what on earth would you do with it? Telstra and Qualcomm had a number of demonstrations set up at the event to show off just what it means in real-world use.

First up was a basic video-download exercise, in which we saw a 30-minute 720p video 140MB in size download in seconds. Great news for Netflix download junkies who may not be organised enough to download their movies and TV before they leave the house.

Next, a productivity demo, comparing the synchronisation of a 378MB Google Drive folder on a pair of Windows laptops, one hooked up to the internet via an HTC A9 with Cat6 LTE (300Mbps), the other to a Nighthawk M1. The difference was stark, with the Nighthawk M1-connected laptop completing the test in 43 seconds versus 1 minute 50 seconds for the other laptop.

Finally, we were shown a 4K 360-degree video, running at 30 frames per second at a bit rate of 22Mbps, streamed live from the outside of the Sydney Opera House over the Telstra network and back down to a Google Pixel XL mounted in a Daydream View VR headset. That’s a pretty demanding video to be live-streaming over a mobile network, and yet we witnessed not a single frame dropped.

Many other examples of how the firms envisage gigabit LTE being used were supplied, including house-sharers wanting fast broadband access without having to get tied down to a fixed-line supplier and mass adoption of live 4K video broadcast.

Perhaps the clearest demonstration of the speed of this network, however, was when we had the opportunity to run our own real-world test at the end of the event. Hooking up an iPad Pro 12.9in to one of the demonstration Nighthawk M1 hotspots, we fired up Netflix and downloaded one of our favourite films, Serenity, in 45 seconds flat. That’s a 524.4MB movie in less than a minute.

It’s easy to get excited about the arrival of faster mobile speeds, but some big questions remain: Will Telstra be increasing its mobile data caps to support the new technology and, if so, how much will those plans cost?

With download speeds that are faster than fixed-line broadband, you’ll be tempted to burn through a lot of data. However, at the time of the writing, Telstra’s fastest and most generous wireless broadband plan offers just 10GB per month (plus “5GB bonus”) for $56 per month.

That’s a long way short of a fixed broadband-like data cap. What’s the point of having better-than-fixed-broadband download speeds if you hit your data limit after a few days? Sure you can add data packs, but at the current price of $10 per 1GB, you could be in for some serious bill shock.

Still, there’s no doubt the launch of the world’s first gigabit LTE network is a huge achievement for Telstra. It represents a significant milestone in global mobile telecommunications and offers an enticing taste of the future. Telstra, Optus and Vodafone have been testing 5G, with speeds of 10Gbps or more being mentioned.

The article includes reporting from alpha.com.