Getting started with virtualisation 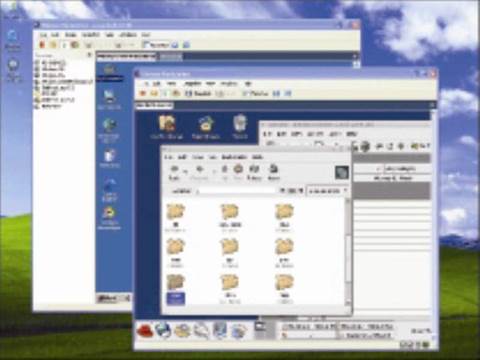 It could save your business money and your data in case of disaster.

Reduce the costs of power and cooling; improve the use of assets; do more with less hardware. These have become the underlying goals of IT departments over the past few years, and one of the primary technologies for achieving these goals is virtualisation. So what is virtualisation and why is it so important for businesses?

Virtualisation is a range of technologies that allow you to run operating systems and applications in their own virtual machine (VM). Each VM is a separate environment, so any problems with an application are contained within it, leaving other VMs completely unaffected. This containment means you can deploy multiple VMs on the same physical box and so reduce the number of computers your business needs. This obviously reduces your hardware expenditure, as well as the space needed in the datacentre, and generates more value for money from the hardware you own.

I have read and accept the privacy policy and terms and conditions and by submitting my email address I agree to receive the Business IT newsletter and receive special offers on behalf of Business IT, nextmedia and its valued partners. We will not share your details with third parties.
Another benefit of VMs that’s often overlooked is that they consist of only a few files. Provided you shut down the applications and the VM properly, you can copy these files to another machine or back them up to tape quickly and easily. This provides a simpler, more robust and reliable backup and disaster recovery option than conventional backup approaches.

We’ll explain the different types of virtualisation and discuss their real-world pros and cons, to help you decide whether it will suit your organisation.

Hardware virtualisation is where there’s little more than a thin layer of software on top of the physical hardware, which is known as a hypervisor. This is accessed by the VMs, which have full access to the underlying hardware and its resources. Whenever a VM needs a change of resources (such as more memory or access to another processor), it can be done in real-time without having to stop and start the VM.

The key advantage here is flexibility, and the fact that each VM has access to the native hardware. This ensures no resources are wasted by the host operating system hogging them itself. On the flip side, the hardware must be supported by the hypervisor – this isn’t only restrictive, but it also makes the underlying computer more expensive. Thankfully, this situation is improving, as more vendors enter the market.

IBM and VMware are the two biggest vendors in this space, but Microsoft is working on its own, long-awaited hypervisor solution. All three vendors see virtualisation as being essential to the next wave of hardware and operating systems. They aren’t alone. Intel and AMD are both enhancing support for virtualisation in forthcoming processors.

With native virtualisation, VMs are created and managed through a console interface, but if you need to adjust the resources used by a VM it can take some effort. First, you have to make resources available by either shutting down or taking them from another VM. That VM then has to be restarted before the resources are put back into the general pool. Resources can then be added to the VM that needs them, but it too needs to be shut down and restarted. This isn’t as time-consuming as it sounds, but it does take planning and can affect the uptime of servers and applications.

One common problem with the use of native virtualisation is that there’s a limit to the size of the VMs. This is often created by the virtualisation software, but if you’re intending to make copies of your VMs for disaster recovery and backup, you don’t want to exceed the size of the media on which you’re going to make your copies. This means a good VM contains only the operating system and application, with the data being stored elsewhere.

Microsoft is gradually opening up to hosting other operating systems and, by allowing those who use Windows Server Enterprise Edition and Virtual Server Enterprise to install multiple copies without purchasing additional licences, is offering increased value for money.

VMware has stolen a march over Microsoft by creating a third-party software market in fully functional VMs. Vendors load their software into the VM and then distribute it to customers. All they need to do is license it or just use it on a time-restricted basis as a complete trial environment.

This is a perfect solution for software vendors and customers alike. It allows the software to be correctly pre-installed and configured before shipping. Customers are isolated from the problems of machine requirements or the complexity of some installations, while technical support teams no longer need to attend a course to get the software running and then spend time trying to tune it.

Microsoft is fighting back and using its own Virtual Server technology to allow customers and developers access to its own software. Customers can get fully configured trial versions, while the developer community gets access to early versions of server and operating systems preconfigured in a VM. This means evaluation is simpler, nothing is left on your servers to cause problems later, and you don’t need a pile of high-spec machines just to test products.

Virtualising your datacenter
The three biggest uses of VMs in the datacentre are for server consolidation (bringing multiple VMs onto the same physical hardware), disaster recovery, and creating test machines for patches and new software pre-deployment. In each of these cases, the speed with which a VM can be provisioned and the fact they can be moved between physical machines makes them efficient and very cost effective.

One of the most talked about uses of virtualisation has been for datacentre power and cost reduction. It might seem that wringing every last drop of performance from a server is efficient, but that isn’t always the case. There’s a point where the more you stress a server the less efficient in terms of power and cooling it becomes. The solution is to set a workload limit for servers and then move VMs around to keep a balance across hardware. This reduces hotspots and the need for excessive cooling, and reduces the amount of power drawn by servers. Blade-server vendors such as HP and IBM see this as the next phase of the datacentre.

Disaster recovery and backup becomes so much easier with VMs too. A simple copy command to another machine or write to a dual-layer DVD should ensure most VMs are swiftly copied without the need for potentially troublesome backup software.

When something happens to the hardware, you simply copy the VM onto the backup machine, adjust the memory settings if necessary, and you’re up and running with almost no downtime. With traditional backup methods, you’d need to find an appropriate tape drive, load the tapes and hope they can be read.

The same is true in terms of data. Rather than rely on the disaster-recovery site to load data, the use of SANs allows for virtual datacentres to be constantly updated with the latest data. Should any single datacentre be unavailable, users will still have up-to-date data to hand – no waiting for tapes to be loaded and data to be restored. This allows for VMs to be moved to different locations easily, quickly and without fear about their data, which is always available through virtual drives.

Calculating the savings is difficult, but simply keeping a large pool of machines updated or maintaining a room at a hosting company can easily exceed $250,000 per annum. Short-term leases, purchase of commodity servers and reloading VMs can slash that cost.

It isn’t only the datacentre where VMs are being deployed. The use of VMs for deploying secure applications to key users or to allow developers to test software has become quite popular. Giving selected users new versions of software to test in a VM allows for a wider test audience with no risk to core corporate data.

Virtualisation also helps to overcome the nightmare of supporting business-critical legacy applications. As companies upgrade their software, they often find there are older operating systems and applications they can’t do without. Upgrading the hardware isn’t a solution, because newer hardware doesn’t have the drivers required for old operating systems. This creates the need to constantly maintain older hardware just for these applications and hope it doesn’t break down.

Installing the operating system and applications into a VM allows them to be migrated to a new generation of hardware without loss of access or data. This extends the life of critical applications without increasing ongoing maintenance costs.

Right for every business?
It might look like moving everything to a VM is a must for any IT environment. Be careful, it isn’t. Traditional VMs have their own interface, use macros for common key combinations and require user training.

Application virtualisation gets away from many of the problems of using VMs for end-user applications, but this is a technology in its infancy. Implementation takes time and thought, and you still need to plan your licensing program to ensure you don’t run more copies than licences. Get it right, however, and virtualisation of your software assets provides resilience, makes backups simpler and will give you greater longevity for applications across multiple generations of hardware.