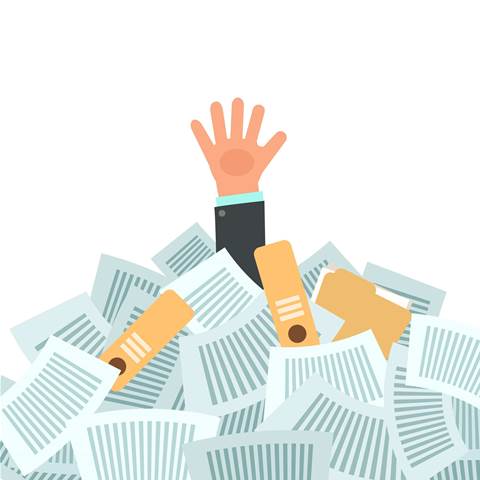 End of financial year chores are getting worse for businesses, according to a survey. Our tips will make your life easier and save time.

If you thought the end of the financial year was rough, you weren't alone – and things are getting worse, according to MYOB's Business Monitor survey of more than 1,000 small and medium enterprise owners.

Last year, the Business Monitor found that 37 percent of SMEs owners were working at weekends to deal with the extra tasks associated with the end of the financial year, and 22 percent said they worked past midnight. But the latest survey has reported an increase in this year's figures to 42 percent and 26 percent respectively.

“What we're seeing here is a discrepancy between how small business owners are feeling and what they are willing to change,” said MYOB chief strategy officer John Moss. “We know SMEs are feeling the pressure, yet a third of SMEs say they won't be doing anything to cut down the time it takes to get ready this year.”

According to the survey, there has been a slight drop in the proportion of business owners doing at least some of their own EOFY reporting, from 37 percent in 2015 to 36 percent this year.

“While it's easy to put the extra work on the back burner, there are several actions small business owners can take to ensure they aren't caught out at tax time. By starting early as well as seeking out help from their advisers or using accounting software, SMEs can save a great deal of personal time and stress further down the track,” added Moss.

So what can you to save time and simplify things next year?

As H&R Block's Mark Chapman advised, good record-keeping is essential for good management and compliance. There are plenty of choices when it comes to accounting software, including some that are suitable for very simple businesses.

It's not just about the accounting records themselves – put a system in place to organise receipts and other documents required for substantiation purposes. Some accounting software lets you attached electronic, scanned or photographed documents to the relevant transactions, and there are several services that help manage such documents. (We still think it's sensible to also store any physical documents in an organised way.)

Computers are good at routine tasks. So take advantage of capabilities such as bank feeds (that automatically put bank transactions into your accounting software) and integrations between accounting programs and point of sale, rostering and other business software. And there are mobile payment systems that make it easy for your customers to pay on the spot and that integrate with accounting systems, as mentioned by Brendan Drummond, principal at SHB Business and Wealth Advisors. (See also our 20 top tips for cloud accounting users and 22 types of clever accounting add-ons for running your business.)

Most of us understand the idea of timing transactions towards the end of the financial year in order to reduce profits, for example by paying early or even in advance. Similarly, there are sometimes good reasons to increase the current year's profit and reduce it for the following year.

Either way, think about it in advance so you have time to consult your advisor (where appropriate) and work out what you're going to do. The later you leave it, the fewer options may remain – for example, you can't delay sending an invoice after it's gone.

Julie Rynski, general manager SME at Westpac, observed that superannuation contributions made on behalf of employees is not tax deductible until it has been paid, so plan to make those transactions before the end of the financial year. (That includes making sure you'll have sufficient cash on hand to make the payment at the time you choose.)

Timing is also important when it comes to actually lodging your tax return, Henderson noted. If you owe the ATO, wait until close to the due date before lodging. Conversely, if you're expecting a refund, you'd want to lodge as soon as possible – but remember you can't do that until you're in a position to close your accounts for the year. Keeping your books up to date as the end of year approaches maximises your flexibility in this regard.

Henderson also mentioned that it may be easier to get an appointment with your financial or legal advisors during off-peak periods, and they may be more focussed on you rather than all their other clients. Whether or not you actually get better advice, you'll have more time to act on it. In addition, your advisors will probably appreciate it if you discuss any major transactions as they arise rather than waiting until the end of year.

Such transactions could include selling assets that have incurred capital losses in order to offset capital gains made by your business, Rynski suggested.

If you do your own bookkeeping, there's a better than one in three chance that you don't know all of the software's functions, according to a 2013 survey of accountants (and we doubt things have changed that much since then). That probably means you're doing some things the hard way -- so invest some time and if necessary money in training to get up to speed.

The same survey reported a 65 percent incidence of miscoded transactions. Cloud accounting systems make it possible for your accountant or external bookkeeper to fix such problems almost as they occur, but wouldn't it be better to learn how to code transactions properly in the first place?