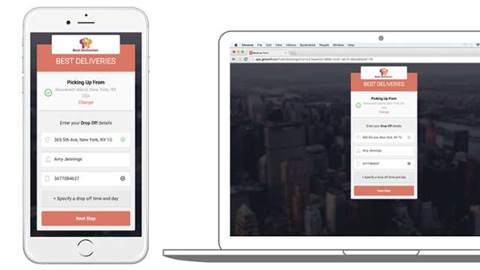 Here’s how a former footballer built a cloud-based delivery platform with customers in 55 countries and 314 cities.

An Australian tech entrepreneur is preparing for the listing of a cloud-based delivery management platform on the Australian Securities Exchange, capping off a long journey that has taken him from the footy field to running a fast-growing tech startup with customers in 55 countries.

The startup, which is based jointly in the US and Australia, is the brain child of managing director Joel Macdonald, and was created after he launched an earlier alcohol delivery ecommerce platform called Liquorun in July 2013.

Liquorun had been a side-hustle for Macdonald, who played a total of 124 games in the AFL as a defender for the Brisbane Lions and Melbourne.

“I was an average footballer. Every Friday I’d be getting the call from the coach saying I was either in the side or out of it, and it was a bit of an emotional rollercoaster. I needed a side-hustle, especially signing one or two year deals,” Macdonald told BIT.

“My passion is technology, it’s growth and marketing. I’ve run a number of technology companies throughout my career since I was 18: an e-commerce platform, a hospitality app, a real estate transactional platform.

“And towards the latter part of my career when I was playing with Melbourne, we were running a logistics company from Melbourne that grew around Australia.”

However, the Liquorun experienced headaches as it scaled nationally, with its support centre’s overhead increasing every time it expanded into a new market.

“When you’re delivering things in an express amount of time, people are constantly calling up asking ‘where’s my delivery and how far away is it? What’s the ETA?’ and that became a huge burden on our support team,” Macdonald said.

“And at the time we were running off SMS, email, paper printouts and we came up against these four challenge pillars as we were scaling: where’s my driver; who do I dispatch to in an efficient manner; how do we optimise our driver’s route; and how do we automate the information flow between our driver, the driver and the customer.”

Macdonald recognised that there was a big gap in the market for a cloud-based logistics management platform that could address the four challenge pillars, and soon GetSwift was born.

“Unless you have the budget of a Domino’s, an Uber or a FedEx, you can’t afford to solve these problems,” he said.

“That was the moment when we put the logistics company on pause – a low-margin, high-cost-of-goods business – and we decided to convert that internal management platform that we built into a cloud-based, software-as-a-service business called GetSwift."

Macdonald set up a base in New York where he joined forces with Bane Hunter, a seasoned product executive with more than 20 years’ experience in the media and financial services sectors who is now the company’s executive chairman.

“The first challenge was navigating the murky waters that is the US. We were in an incubator to start with, and once we cut ties with that incubator, we pulled the product apart and that’s when Hunter and I started collaborating,” Macdonald said.

“Hunter is a New York native, and knows the corporate landscape quite well, so having a pathway really accelerated both the company’s and my personal development.”

Soon after landing in the US, GetSwift had an opportunity to validate Macdonald’s assumptions when it won a trial contract with a multi-million dollar delivery company called InstaCart.

“This is where we had the moment of this small, battling, nimble company invited to compete on the world stage. And now here we are, competing with the best and really adding value to something to a Silicon Valley titan,” Macdonald said.

In the 16 months since, GetSwift has experienced explosive growth. As of September, it handled a total of 468,875 transaction, across 55 countries and 314 cities.

In late October, the company launched a prospectus with the aim of listing on the ASX in mid-December, subject to administrative processes.

Hunter and Macdonald’s first tip is to make sure you apply startup methodologies such as lean startup in order to validate your business assumptions.

“Do not build a brand around an individual, build it around a product and a commercial opportunity. What problem are you solving?

“The reason why we were so successful at growth and product development is because we approached it differently. We went to our customers, sat down with them and asked them about their business objective. We didn’t build something and hope that it would fit.”

2. It’s okay to fly below the radar

While it can be tempting to try to hype up your story before you launch, a better strategy is to wait until you have some success first and then tell the world.

“We took the position that we were going to be very quiet about it, we were going to go out, have this stickiness, scalability, security and stability in the platform – and in the global marketplace,” Hunter said.

“We made our mark first before we popped on the scene to say ‘here’s what we did and here’s what we’re trying to accomplish’.”

3. Be careful about whose investment you accept

When seeking investment, it is important to be cautious about who’s pouring money in and what they expect.

“You’re going to hear a lot of claims you should verify and be very cautious about. You should also be very careful about the capital you accept. I say this to a lot startups: Money is very easy,” Hunter said.

“What comes with the money is the question you should ask yourself – and not once, but multiple times. What is going to be asked of you not just today, but also what will be asked of you a few years down the road.”

4. Entrepreneurialism is a lifestyle, not a job

Macdonald cautions anyone who thinks you can build a successful business without putting a lot of work into it first.

“I’ve been living in America for a couple of years and I’m yet to see a millionaire or a billionaire who has become what they are today by putting on a hoodie, cracking open a beer, and waiting for stuff and customers to happen.

“That’s a Hollywood illusion, and in real life it’s not that easy.

Hunter adds that being an entrepreneur is not just a job, it’s a lifestyle that you have to embrace because it’s hard work.

“To not only get to a point where you feel like you have actually achieved something, but to effectively continue takes an incredible sense of passion and determination. It takes a lot of hits,” Hunter said.

“You need adaptability and humbleness with an incredible sense of determination. You need solutions to the problem and not excuses for why you can’t get it done.

Most educational institutions condition their students to avoid failure. However, when it comes to entrepreneurship, making mistakes and learning from them is vital.

“The hardest thing is moving through the fear barrier and moving through what we’re conditioned at a young age to think of as a limited realm of possibilities,” MacDonald said.

“I’m still fighting the conditioning of a limiting education system that trains you to think that there’s only one pathway through life, where you study and then you get graded on how you study.

“Well, if you can embrace getting graded and then learning the lesson after, that’s a huge step and one that startups have adapted quite fast. Fail, fail fast, and use that failure as a fantastic tool to keep learning.”