If you rely on spreadsheets will Excel 2013 make your life any easier? Read about the new Chart, Quick Analysis and PivotTable capabilities and more.

It isn’t often that you start using a new piece of software and chortle in delight, but that’s exactly what happened when we first launched Excel 2013. The reason: lists.
Let’s say you run a query on a database that returns the usual mishmash of poorly formatted data. Imagine hundreds of rows, consisting of three columns filled with obscurely worded job functions, email addresses and phone numbers. To make sense of the data in Excel 2013, you type in the first row’s values and then start to repeat the job for the second row. Excel then instantly applies the lessons learnt to the rest of the data, with all the columns below filling with the correctly formatted data. It’s the sort of problem 100-line macros have been written to solve in the past.
Newsletter Signup

I have read and accept the privacy policy and terms and conditions and by submitting my email address I agree to receive the Business IT newsletter and receive special offers on behalf of Business IT, nextmedia and its valued partners. We will not share your details with third parties.
Chart clever 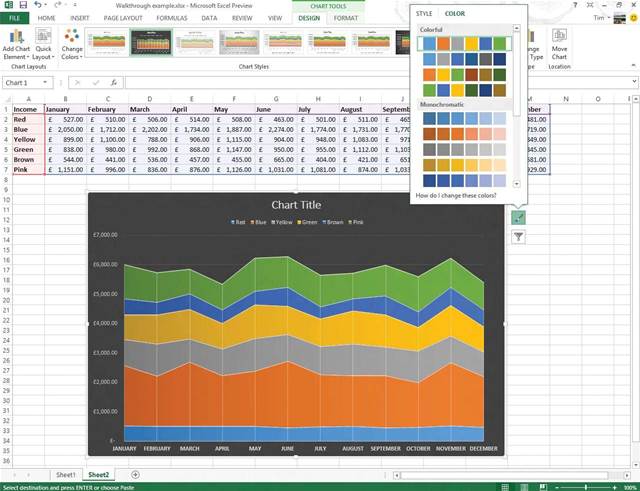 Click to enlarge
Chart handling is the real star of Excel 2013. Excel 2010 and 2007 both made it much easier to create professional-looking charts than previous versions of Excel (and any of its rivals), but you had to wade through a wizard-style interface to find the style you wanted. It’s easy to see how many people would plump for the familiar ones, without giving much thought to what presentation best suited their data.
Excel 2013 is far cleverer. Its main weapon is the Recommended Charts feature (see Inserting and amending charts, below). If you have a simple set of figures – say, two rows of six columns – then it will suggest basic charts such as a line bar or a clustered column.
Now imagine you’re dealing with more complicated information. Eight rows of data, the bottom of which is automatically summed from the seven above it. This time, Excel will suggest a chart that presents the total figure as a line and plots the figures that make up that total as bar charts beneath it. If you don’t like that choice, there are others to pick from.
Let’s make amends 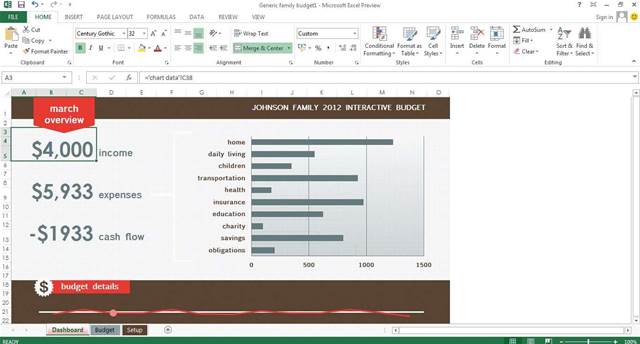 Click to enlarge
Forgive us our obsession with charts, but we’re also big fans of how easy it is to make amends once a chart is in place. In our example of the six columns of data, the final one was the sum of all the previous, and this was skewing the relative sizes. Click anywhere on the chart and you’ll see three new icons appear to its right; for now, it’s the bottom one we’re interested in.
Called Chart Filters, it allows you to deselect (or reselect) any data you want to remove from the chart. In our example, getting rid of the Total figures is a matter of a single click. The middle icon (Chart Styles) is all about appearance, allowing you to pick from a selection of predefined styles – 3D graphs rather than 2D, perhaps, or using a black background rather than white.
We’re disappointed to have only eight styles to choose from, however, and that it isn’t possible to replace a default style with our own preference. While you can make dozens of tweaks if you head to the Chart | Design ribbon, we’d like to set a few house styles to apply in an instant. The topmost icon refers to Chart Elements: think axis labels, gridlines and trendlines. So you can switch them off and on, and adjust their position.
If you’re trying to make a point in a meeting, you may also find yourself using Excel 2013’s animation skills. Want to show the effect of 500 sales versus 200? Change the value in the table and the chart animates, redrawing the axis scales as it goes. It hammers home the point far more than a changing figure ever will.
Quick analysis 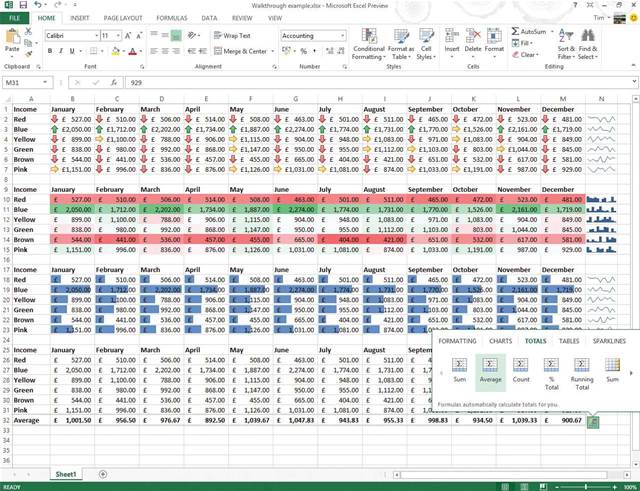 Click to enlarge
One of Excel 2007’s best innovations was conditional formatting. Taking a table of data and applying formatting based on the values of the cells, with one obvious example being sales figures: the highest figures would be shaded vibrant green; the worst vibrant red; the rest would gain a shade somewhere in between.
Excel 2010 added extra niceties, such as Sparklines. These analysed the figures from a row of cells and placed a graphic in the cell to their right to give a visual representation of the data. You could choose a line graph, bar charts or a simple win/loss image.
While Excel 2013 doesn’t add many conditional formatting features, it makes them easier to apply. Select your table of data and a Quick Analysis icon appears at the bottom right; click it and you’re greeted with a mini options menu that lets you select the most common conditional formatting options (such as the colour scale mentioned above, or selecting the top 10% of results).
You can also use this menu to add charts, tables and Sparklines, but we like the Totals feature. Choose this to instantly sum figures (either at the bottom of columns or to the right of rows), count values and calculate averages.
Making sense of data 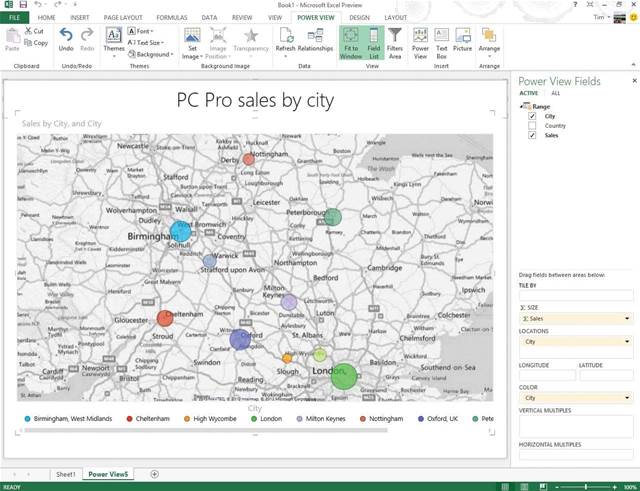 Click to enlarge
PivotTables come to the fore when handling interconnected data: the sales figures for a toy shop chain, for example, where the figures apply across product type, month, unit sales, sales value, sales person, district, promotions running – the list goes on.
They provide a way to view data through whichever lens you choose: you can see at a glance how effective each sales person was compared to others; track the success of your promotions; drill down to one month’s figures.
Previously, no-one could call themselves a master of Excel unless they could tap into the power of PivotTables, but Excel 2013 allows even casual users to take advantage. It’s similar to Suggested Charts, but you select the data and click on the Suggested PivotTables icon.
The feature that’s generated much excitement among those working in business intelligence is Power View. Only available in the Office Professional Plus version, it has the ability to turn a mass of data into meaningful graphics – ideal if you need to present complex information such as sales by location, especially as you can integrate Bing Maps. Coupled with the PowerPivot add-in, it turns Excel into a genuine business intelligence tool, giving even small businesses the means to intelligently analyse their data – and act on it.
The small things
Anyone who works with multiple worksheets at one time will appreciate that Excel 2013 opens files in different windows, making it easier to have one sheet open on the left-hand screen and another on the right.
But there are irritations, too. We’d love to switch off the swooshing animations Microsoft seems so keen on; they can be a distraction. It’s also astounding that two people can’t work simultaneously on the same Excel file, given that “collaboration” is as big a buzzword as “cloud”. But you can’t: the same old “File is locked” warning appears as always.
Despite these rumblings of discontent, we can’t hide our admiration for Excel 2013. Of all the Office components, its changes are likely to have the biggest effect on people’s working lives. 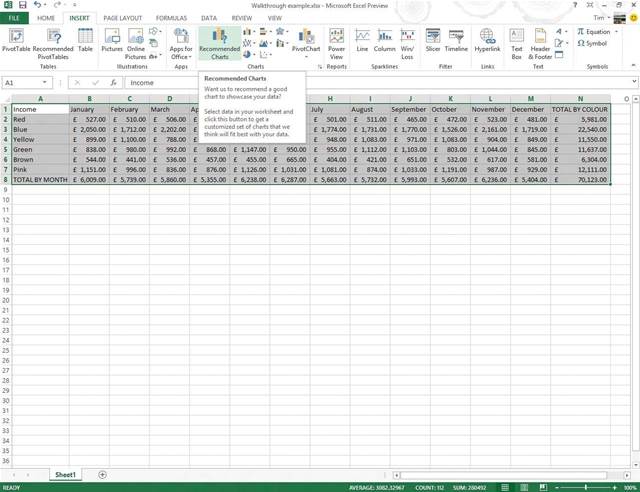 1 Excel 2007 introduced excellent charting tools, but Excel 2013 makes it easier to use them thanks to Recommended Charts. Select your data, in this case the amount of profit from each colour of toy sold, then head to Insert | Recommended Charts. 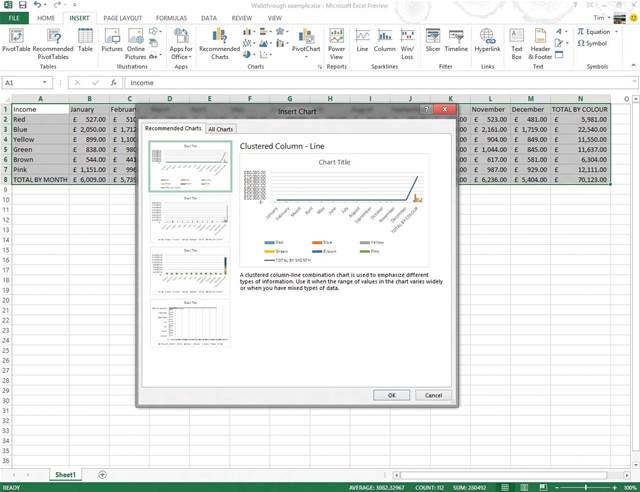 2 Since our data includes totals based on the results, Excel has worked out that we’d benefit from a mixed chart: clustered columns to show how each colour of toy sold, and then a line above them to indicate how the total sales vary over time. 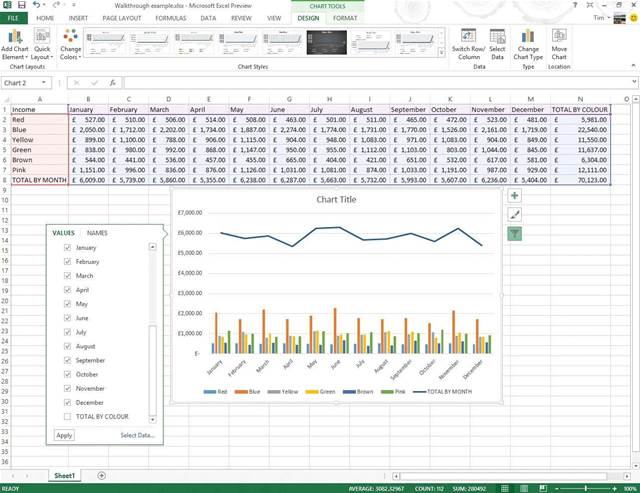 3 Our table includes an extra column at the end for the total sales per colour, and this is skewing the results. Click anywhere on the chart and three icons appear: click on Chart Filters at the bottom, deselect Total from the categories, and then hit Apply. It’s gone.
Copyright © Alphr, Dennis Publishing
Tags:
2013 charts excel office 2013 pivottables quick analysis review software spreadsheet
By Barry Collins
Jonathan Bray
Tim Danton
Oct 15 2012
4:45PM