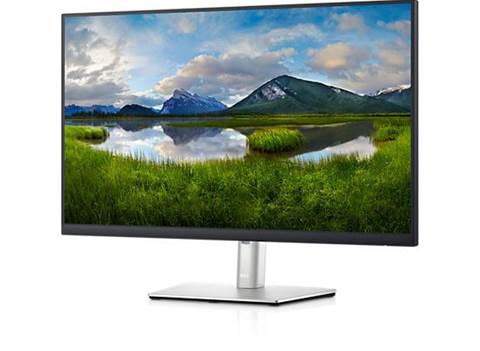 It’s pretty much the standard bearer for what an office monitor should be.

We’re big fans of Dell’s office monitors. This new 27-inch beast is the latest in a line that has been producing incremental innovations for many years.

The main benefit this time round is… wait for it… cable management.

This is no bad thing. While you can still connect to it in multiple ways, you now have the ability to use just a single USB-C cable to connect to a laptop and charge it at the same time. Dell tells us that using just one cable in this way can save up to 72 per cent of desk space. While we are inclined to scoff at such a stat, a quick glance at our work space tells us that it may have a point. Either way, a single cable on a desk (especially a hot desk) makes for some serious space saving and neatness.

Dell includes a DisplayPort cable, USB-A-to-USB-C cable and a USB-C cable in addition to the power lead in the box.

Power consumption is a big deal with office monitors as many organisations by crate loads at a time. Dell tells us that, “This monitor meets the latest regulatory and environmental standards such as ENERGY STAR, EPEATi, TCO and CEL/CECP/CEC… [it] is shipped Styrofoam-free and the packaging is made of at least 75% recycled cardboard… PowerNapi [is] a feature that dims or puts your monitor to sleep when it’s not in use.”

The flat, matte coated screen itself is bright, evenly lit and fares well at fending off reflections and glare. We found the Standard Picture mode to be perfect for office work but the usual pre-sets are present including aggressive eye comfort modes and modes for gaming. FPS gamers will likely feel limited by the 60Hz refresh rate and 5ms grey-to-grey time which isn’t particularly smooth or clear in fast and frantic action but it’s fine for casual games.

Colours are bright and vibrant when watching multimedia and contrast is decent too with detail remaining in both bright and dark areas. It will struggle with very bright content optimised for HDR though. On a black screen, we saw some noticeable light leakage in the top left corner (caused by the edge-mounted LEDs) but it wasn’t too bright or distracting. The lack of halo effect (light bleeding) surrounding bright objects on a black background is also relatively low. However, designers may struggle with precise colour accuracy as it only supports 99 per cent of the sRGB gamut and individual colour settings can’t easily be tinkered with. The OSD is nonetheless simple to access and intuitive to use via a joystick-button at the rear.

The stand has a small footprint and is generally solid. We are also impressed by Dell’s tool-less quick-build system which utilises a single handscrew at the base and a quick-release, snap-in system for the screen – it takes seconds to physically set-up. Another boon is the (very) generous amount of movement afforded by the stand. There’s 150mm of height adjustment, -5° to 21° tilt, -45° to 45° swivel and, amazingly, -90° to 90° pivot. It’s probably the best stand on the market.

At $674 its far from being the cheapest monitor around but if your employees are using smaller, older monitors with low resolution and mediocre lighting, this will help boost their productivity and make them less fatigued. It’s worth noting that it’s compatible with a $48 snap-on soundbar too. It’s pretty much the standard bearer for what an office monitor should be. We fully recommend it.