Aussie social platform to offer e-commerce with no upfront cost 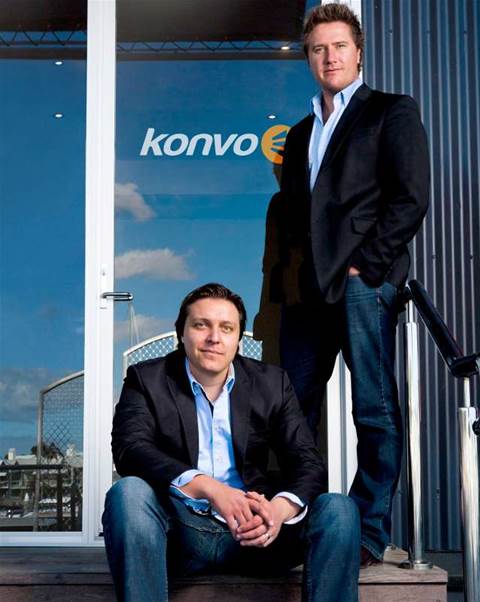 Konvo is taking on the likes of Facebook and Shopify by offering e-commerce sites with merchant payment facilities and no upfront fees.

A group of Gold Coast entrepreneurs is preparing to launch a new social marketplace that offers businesses an e-commerce site, while serving up easy shopping and relevant content to end users.

It's a bold move, entering a crowded market with major and established players such as Facebook and Shopify. But the entrepreneurs believe they have a competitive edge because their new social platform, called Konvo, will allow businesses to set up an e-commerce store and payment facility with no upfront charge. Instead, the platform takes a commission on the products sold through the platform.

Because the platform runs off a single built-in e-commerce site, end users benefit from one click shopping from a range of different online retailers.

Development work on the platform began two and a half years ago, with the social media features becoming available to end users in beta form earlier this year, and the e-commerce features expected to come online later in the year.

Konvo also offers end users a feature called ‘true trend’, which shows them the keywords that are trending in their group of friends, rather than globally across the social network.

True trend will also serve as a built-in marketing tool for businesses, as users will be able to see which products are popular within their social circle.

The social shopping platform is the brainchild of advertising industry veterans Nicholas Reid and Davide De Vincentiis, who have been joined by Facebook and Amazon veteran Chris Adams as Konvo’s commercial director.

“Two and a half years ago, we were working in the social media, branding and marketing space, and we read an article asking why there isn’t a Steve Jobs of social marketing,” Reid told BIT.

“That got us thinking – looking at what he did for the PC market from a consumer’s point of view when the whole industry had grown very organically from a technical point of view – is there room for something like that? We believed there was, and we developed a business plan.

“Shopping used to be a social experience. But as it’s become more convenient, it’s become less social. And the funny thing is that what drives sales is social validation. We saw a huge opportunity to combine the two things to drive a next-generation social commerce platform.”

How the platform works

For end users, Konvo aims to overcome a major complaint about existing social media sites, where users complain about regularly seeing irrelevant content. Reid claims that unlike the algorithms used by Facebook, the true trend system puts end users back in control.

“We do real-time indexing of every post, every conversation, every image, every hashtag, we deliver a user’s personalised real-time trend list, and we’re building it so no two user’s trend lists will ever be the same,” Reid said.

“Your trend will be different to Sally’s, and Sally’s will be different because her friends are talking about something slightly different, and that will affect her true trend list. So it’s basically a user’s indicator of what’s most important in their social group.”

A major selling point for merchants is that, unlike rivals such as Shopify and BigCommerce, there is no upfront fees for setting up a store on the site. While the commission rate for sales has not been determined yet, Reid estimates the commission could be 5 to 6 percent of sales price.

The e-commerce pages will work as standalone e-commerce sites and have some support for themes, meaning merchants will be able to point their business’ URL at their Konvo page and benefit from SEO and SEM driven traffic.

“What happens with Shopify is very interesting. There’s a lot of options on there, but you’re up for $500 or $1000 before you even start selling anything, and then plus merchant facility and so forth. We want to simplify the whole process,” he said.

“What we want to do is offer businesses of all sizes a customisable, free website with a WYSIWYG editor, so it’s nice and easy… We want give them somewhere to build a standalone webpage that is consistent with their other business pages.

“It’s a 100 percent free [to set your store up]. It’s not like Squarespace, where it sounds free for a little bit but becomes costly. We just promote business. We want you to do well because we take a sales commission. Shopify doesn’t do that – they take their commission before you even start.”

Included as part of the package is a merchant payment account, which Reid said is integrated into the platform for both end users and merchants.

“What we’re doing is working on a payment system. We’re working with a third party based in Australia, and this has been a really interesting area for us. Using a merchant facility can be really painful for both the merchant and the user,” he said.

“We’re building a payment platform where, with a couple of clicks, you have a payment facility with EFTPOS and credit cards, with about a day approval. For the end user, they can shop across multiple merchants and multiple categories with one-click purchase with one checkout.”

According to Reid, the platform has been developed in-house and has already secured $3 million to date from private investors, and plans to go to the market in the future for additional capital.

Konvo faces significant competition, both from global social media giants such as Facebook and Twitter, as well as established e-commerce platforms like Shopify, Magento and BigCommerce.

Reid plans to build a user base by attracting merchants on to the platform first, and then use discounts to get shoppers to get their friends using the platform.

“People search, they look, they purchase. When they purchase they get a discount to invite friends on to Konvo so they can see what their friends are discovering and talking about. It’s a nice little social interaction with a social commerce story,” he said.

Reid adds that his team have learnt the lessons from failed social networks such as Google Plus and MySpace, and have taken them on board.

“What happened with Google Plus is that these guys smartest people in the room and they do so many fantastic things. But it’s about simplifying the model, they had so many good things but they put too many things in one model, and it never resonated with people because it became too tricky.

“We learnt a valuable lesson from MySpace, which was a great product but it was too customisable, and everyone ended up with a different experience… What we want to do is keep it as simple as possible, work within a framework, and be very clear about what to do and keep it very, very simple to use.”

Reid argues the integrated marketing aspect of true trend will be a major advantage point for attracting merchants to his platform over its more established e-commerce rivals.

Meanwhile, he claims the integrated e-commerce business model will give Konvo a big advantage over advertising-led rivals such as Twitter and Facebook.

“If you look at Facebook currently, because they’ve grown organically, they’ve had to constantly reverse engineer revenue streams. And what happens with business if a 1000 people like your page, you would think you could talk to them all directly,” Reid said.

“But they penalise you to talk to those 1000 people that you worked hard to get. We want to change all that… We want you to do well because we take a sales commission.