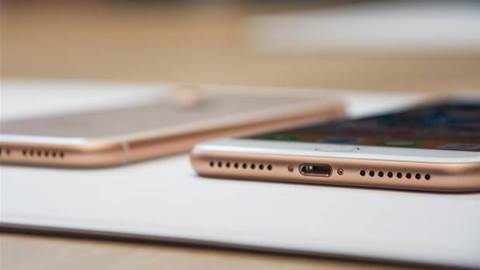 Which is the best: the iPhone 8, iPhone 8 Plus, Galaxy S8 or Note 8? Or should you stick with the iPhone 7?

Apple recently unveiled its new range of smartphones, and we managed to get our hands on them for previews of the Phone 8, iPhone 8 Plus and iPhone X.

But how do they compare with Apple’s previous-generation handset and the flagship phones of its main competitor, Samsung? And, if you do want to upgrade to one of Apple’s new iPhones, which is the best choice for you?

We’ll leave aside the iPhone X for now, because not only is it eye-wateringly expensive (starting from  $1,579) but it won’t be available until early November anyway.

However, Apple’s two other new handsets will available from tomorrow (22 September), so we thought it might be useful to look at the following comparisons:

Let’s start with the most obvious head-to-head first.

In its promotion for the Galaxy S8, Samsung suggested it would make you rethink what a phone looks like. That’s an exaggeration, of course, but it does shake things up with remarkably thin bezel surrounding the screen, and a reshaped curved display that’s designed to offer more screen real estate, while still allowing you to use the device with one hand.

Samsung achieves this with a taller design that allows for an 18.5:9 screen aspect ratio, compared to most phones’ 16:9. And the curved, edge-to-edge display makes for a fantastic looking handset. 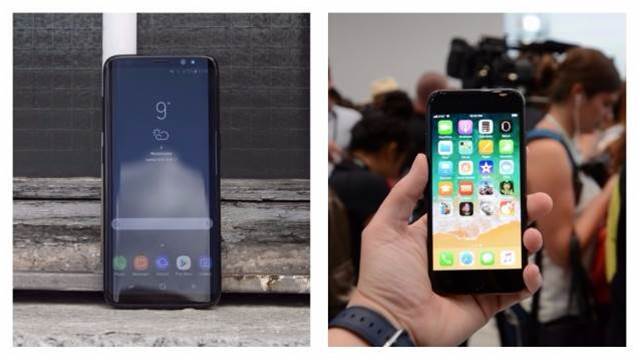 The iPhone 8, on the other hand, doesn't reinvent the wheel. You'll be looking at the eye-wateringly expensive iPhone X for that kind of shift. So no edge-to-edge display, but a handset that is, by anybody's definition, handsome.

That also means there's no curve to the screen. On a purely aesthetic level, that's a bit of a shame, but on a practical level, it's either a good thing or a neutral one. The former because a curved screen makes breakages more likely and repair costs significantly higher; on the latter because curved displays aren't actually that useful, barring a couple of gimmicks.

But then there’s the matter of the display. There’s certainly nothing wrong the iPhone 8’s screen – which has been improved with the addition of Apple’s the ambient light detection technology, TrueTone – but at 4.7 inches and 1334 x 750 pixels, it pales in comparison to the Galaxy S8’s 5.8in and 2,560 x 1,440 pixels.

On the other hand, if you want a small, very pocketable device, the iPhone 8 will be much more suitable than the S8.

The iPhone 8 also introduces wireless charging for the first time. This is a feature that Samsung flagships have had for three generations, but Apple’s arrival should be celebrated: we’ll likely be inundated with quality wireless charging stations.

We’ve yet to run our full suite of tests on the iPhone 8 and it’s always hard to compare Apple’s new phones against Android handsets before we’ve had a chance to benchmark them. Why? Because Apple uses its own processors, so there’s nothing out there to compare it with.

The iPhone 8, like the iPhone 8 Plus and iPhone X, contains the hexa-core A11 Bionic chip which promises a suitably impressive speed boost over last year's model, but what that means in real terms remains to be seen.

The S8 is easier to assess, because it’s already out there, and we can see how it compares to rivals. And the answer is very well indeed. It’s powered by the top-of-the-range Snapdragon 835 in the US or Samsung’s Exynos 8895 here in Australia. Both produce similar, very impressive results.

What about the iPhone 8? One recent Geekbench 4 test reported online shows an Apple handset with six cores (that matches the A11 Bionic) getting scores of just under 10,000 (for multi-core) and just over 4,000 (single-core). They’re stunning results but they should be taken with a pinch of salt until we test the iPhone 8 ourselves. We do, however, strongly suspect the iPhone 8 will leapfrog the Galaxy 8 in performance.

Unfortunately, that doesn’t seem likely with battery life, with Apple saying the iPhone 8 “lasts about the same as iPhone 7”.

We’re yet run our video-rundown battery test on the iPhone 8, but if, as Apple says, there’s no improvement, the Galaxy S8 will remain much longer-lasting – with a result of 16 hours 45 minutes in our test, compared to the iPhone 7’s 13 hours 2 minutes.

While the iPhone 8 Plus has a dual-lens camera, the iPhone 8 has just a single lens 12-megapixel snapper. The pictures looked good on stage at Apple's keynote, but the proof will be in the pudding. 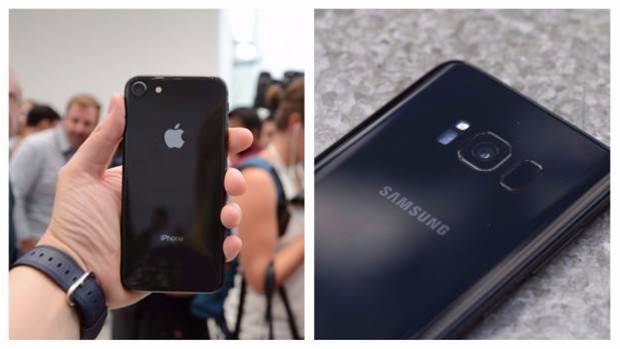 Samsung hasn’t branched out into dual-lens cameras in the S range yet, but that doesn’t seem to have done their cameras any harm. The S8 may have only been a modest improvement on the S7’s (on paper, they were identical: 12 megapixels, f/1.7 aperture) but it’s still the second best in the business to our eyes – just a little shy of the superior snapper on the Google Pixel.

Apple has its work cut out catching up. We'll know if it's managed it when our review model arrives.

There’s little price difference when it comes to telco plans, however. For example, at the time of writing, Virgin had the cheapest 2GB, two-year contact for the 64GB iPhone 8 at $69 per month, with no price difference for its equivalent Galaxy S8 plan.

So, overall, we think the Galaxy S8 is still best smartphone money can buy and has an edge over the iPhone 8 in most areas that matter – particularly the display and battery life.

Aesthetically, the Samsung Galaxy S8 is considerably prettier, while the iPhone 8 falls back on a familiar, albeit iconic, look. In performance, we suspect the iPhone 8 will be very hard to beat – hardly surprising given the S8 had a six-month headstart, but worth highlighting all the same.

Your decision may come down to your operating system preference, of course. Some people just don't get on with Android, in which case it’s hard to argue for the Galaxy S8.

However, even if you want to stay with iOS, your decision isn’t necessarily straightforward…