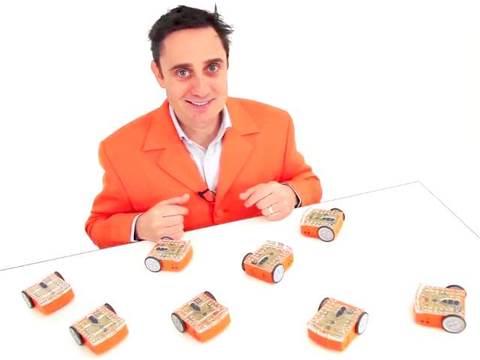 An Australian entrepreneur explains how he crowdfunded a Lego-compatible robot and landed a big schools contract.

In recent times, there’s been a lot of talk about digital innovation and teaching of STEM (science, technology, engineering and maths) in schools. One businessman has decided to do something about it.

In the 18 months since then, he has shipped around 40,000-45,000 of the learning tools to teachers and hobbyists alike – without any significant advertising or promotion.

He scored a major order from the West Australian education department to ship the devices to every public primary school in the state – a total of around 10,500 units.

According to O’Brien, there are two vital lessons for anyone targeting the edutech market:

The origins of Edison lay in an earlier product O’Brien developed, a solder-free electronic construction system called MicroBrics, which won a People’s Choice Award on the ABC program The New Investors back in 2004.

"What we found is that schools – with the majority being public schools – have limited budgets and what money they do have they are cautious with,” O’Brien said.

Getting the right price point

O’Brien identified that a lower-cost learning tool – at a price point of around $50 as part of a kit – could allow teachers and departments could purchase devices from their discretionary budgets.

This, in turn, would allow him to disrupt the market by bypassing the lengthy school budgeting process.

In order to test these business assumptions, he set up a campaign on crowdfunding platform Kickstarter.

That was a huge success, as O’Brien explained: "A school traditionally bought something like a Lego Mindstorm set at around $500 a kit. You can buy 10 Edisons for the same amount.

"We don't need to go into schools and train teachers one-by-one. They can go online, order it and implement it themselves without significant training and support from us. We found that model works quite successful where previous higher-priced products were not so successful.

"For primary schools, it's the perfect product. They can have one robot per student and for schools that have tight budgets it means they can have robotics in their schools. For a lot of schools, [teaching robotics] otherwise isn't viable. They don't have the funds to support it.”

A second crucial lesson O’Brien has learnt is that, when targeting the education market, it’s not enough to just have a great piece of technology. To make it into classrooms, a product also needs to be supported with things like lesson plans and activity sheets.

"When you're dealing with schools, you need a complete product with everything a teacher needs to get it up and running. How we've met that is – rather than supplying a piece of hardware – we supply everything that the teacher needs to implement it as well,” O’Brien said.

"We have a web app that's a graphic-based programming language where you drag and drop icons to form a program. The software that students use to program the robot is freely available.

“We also have 10 lesson plans that teachers can use. That includes worksheets, activity sheets, and instructions for the teacher. We also have downloadable activity mats so schools can either print those off themselves, or go to Officeworks and have it printed.”

Success in the west

Having demonstrated its worth in the classroom, Edison caught the attention of the West Australian education department, which went out to tender with an order for 10,500 of the devices.

"It’s a very good thing to see WA getting on board with supporting digital technologies and giving schools the resources they need. They made quite a significant investment into a whole range of robotics and new technology resources to engage kids in STEM-related subjects,” O’Brien said.

"They had been looking at Edison and actually put it on their tender list of items they were looking to purchase.”

The devices were manufactured and shipped through May and June, and are set to enter the hands of students within the next month.