Amazon unveils the ‘Shop of the Future’ 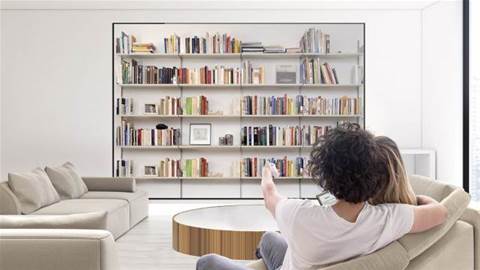 A new report reveals a retail future with everything from AI assistants to self-managing homes and body implants.

The future of shopping is going to involve a lot of talking – some of it with animals. Augmented reality will drive a more interactive experience, and your body will do the buying. That’s according to a report commissioned by Amazon to mark the release of its UK ‘Shop of the Future’ store.

In the coming decades (the report isn’t more specific than that), stores will be run by voice-activated shopping assistants and connect automatically with self-managing homes. Shoppers will spend less time buying essentials, and more time on 3D-print creative projects or indulging in “guilt-free hedonism” within sensory augmented reality.

In particular, the futurists who produced the report – Anne Lise Kjaer, of trend-management firm Kjaer Global, and William Higham, from creative consultancy Next Big Thing – predict that automated subscriptions will increasingly allow homes to self-manage the purchase of food and other essential items.

“I don't really want to be shopping for bleach and stuff like that,” Kjaer said. “I want to go to the farmer's market and buy the cool stuff. I want to grow a bit at home.

“The convenience of shopping online and using voice activation is the future. If you like the kind of T-shirt you’re wearing, maybe you want an upmarket version. This is where AI comes in. It will say, ‘you bought this six months ago, for this price. Now we can find you one that [costs] 50% more, that lasts longer and [has] colours that won't bleed.’”

As well as AI assistants that upsell T-shirts and automatically restock cleaning products, the futurists believe advances in natural-language processing and integrated sensors could lead to devices that change the way we think about almost every facet of our homes – even our own pets.

“Pet-translator devices may help us get to know our dogs and cats better," said Higham. “And you may soon be able to buy ‘smart conveniences’, such as fridges that know when they’re getting low on certain foods and reorder the groceries themselves, as well as space-saving technology like ‘modular walls’ that can be reshaped into chairs, shelves or tables depending on what you need.”

Looking further into the future, the futurists point to advances in implanted technology, with embedded sensors letting us pay for items without the need for cash or cards. They also mention the idea of “super-agers”, with people of advanced ages boasting mental fitness on par with younger ages, thanks to tools that encourage lifelong learning through cross-generational “brain dates”.

It’s perhaps no surprise that automated shopping and voice-controlled assistants are so prominent in the report, given that Amazon is pushing hard with its Alexa-controlled Echo device (though not yet in Australia, unfortunately). The futurists also talk about services that will be increasingly simplified through self-management, which plays to Amazon’s tune of Prime subscriptions and Dash buttons.

Another futuristic concept mentioned in the report include what the futurists dubs personality projectors – virtual shelves that display digital books, film and music collections in a way that mimics traditional bookshelves.

The Shop of the Future store is designed as a hub for “cutting-edge products” that showcase some of the predicted next-generation technology within existing products. It’s basically an excuse to push more technology and gadgets on Amazon, but done in a more specific, direct way.

The question lingering throughout the report’s future-gazing, however, is whether a move towards sensor-controlled automation would lead to Amazon having a monopoly over our daily shopping habits. Will AI-directed consumption subsume individuals within a system where our desires and life-choices are guided by Amazon’s systems, offering us only the illusion of authenticity via 3D-printed craft items and vegan cooking?

Perhaps it won’t as bad as all that, but either way report is a fascinating insight into how Amazon views the near- and long-term future of retail. And this is company with plans to push into the Australian retail market in a big way. See our six survival tips for Amazon’s imminent expansion into our market.