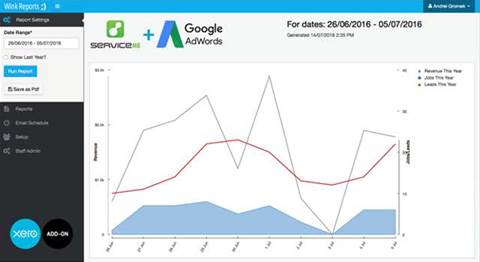 A Newcastle startup has developed a platform that gives businesses a single view of their accounts and data from services ranging from Facebook to Salesforce.

Big data dashboards and reports, which visually show business managers how a company is performing at a glance, were once the domain of big enterprises. A Newcastle-based startup is looking to change that with a new online service called Wink Reports.

The platform allows small businesses to create custom dashboards that draw on data from Xero and its many add-ons, and can also pull in information from other online services.

It works with major social media platforms including Facebook, LinkedIn, Twitter, Instagram and Google+; business tools like Vend, WorkflowMax, Unleashed, ServiceM8 and Kounta; along with marketing tools such as AdWords, Google Analytics, MailChimp and Salesforce.

The custom reports generated from the data can then be exported in a range of formats, including as PDFs and Excel spreadsheets. Wink Reports' pricing starts at $50 per month.

The need to bring together information from a range of platforms has become an increasingly common theme. Xero’s recent annual conference in Brisbane focused heavily on its increasing integration with third-party platforms, including BPay and Facebook Messenger.

Seeing a gap in the market

Wink Reports chief executive Andrei Gromek told BIT the platform was created after the founders noticed a gap in the add-on marketplace for a custom reporting tool that could draw on data not only from Xero, but also its many add-ons.

“Wink started in 2013. We all had come from enterprise software backgrounds, working in [enterprise resource planning], both from a development and a consulting perspective. Back when Xero really started to take off, that’s where we started,” Gromek said.

“In those early days there tended to be a lot of business owners who said: ‘Yeah I’m using Xero, but I’m also using WorkflowMax or ServiceM8’. They just couldn’t get the reports they needed. That’s where we stepped in and developed a lot of custom stuff for customers.

“Last year, we really started to standardise a lot of our reports and deployed a dashboard tool. We became more focused on the cloud integrators and distributing Wink through them, along with bookkeepers and accountants, so they could roll out cross-platform reports to clients.”

Gromek said the cloud-based tool was developed in-house, meaning it doesn’t require another product such as Microsoft PowerBI, and allows business owners to see all the information that matters to their business in one place.

“From when we started to when we went live was the best part of a year. It took us a while to focus on what we were and weren’t going to do. Once we landed on reporting – and more broadly data aggregation – that springboarded into the next year,” he said.

“So not just accounts, but all their operations, jobs, inventory, labour, and also things like their CRM, sales data, social media, Google analytics and marketing. It’s moving all of that into a single view of your business – it’s like big data for small business,” Gromek said.

As one of 500 apps in Xero’s growing add-on marketplace, Gromek has nothing but praise for the cloud accounting platform’s partner efforts and its application programming interface (API), which enables third parties to create apps that integrate with Xero.

“[Xero’s] API is nice and robust, it’s up 99.9 percent of the time, no complaints about that,” Gromek said.

“There’s certain rules they enforce on us, like you can download X amount of data within a 24-hour period – they place limits on you. That’s okay, because we tend to sync changes that clients make in their data to get what we need for reports.

“Working with the social media APIs is easy. They’re really well documented, there’s a lot of assistance and help available online in using those. They’re a dream to work with.”

According to Gromek, one of the big challenges in developing Wink Reports was in developing data models that combined information gathered from multiple sources.

“Developing our own data models was a challenge, because we’ve got tweets but we’ve also got customer invoices, and it’s really chalk and cheese. A lot of data-based design had to be done in the early days to make sure we got those structures and relationships right.”

Looking to the future, Gromek is keen to add a range of additional features to Wink Reports, including automating processes and adding support for new technologies such as augmented reality and wearables.

“What’s next for us is two things. We’re looking to add more automation in your reports, so when certain triggers happen in your business, we’ll automate reports being generate and sent, so when you complete a job in ServiceM8, you can send a stock replenishment report to the guy who runs the warehouse,” he said.

“We’re also looking at wearable notifications, AR [augmented reality], machine learning and that sort of thing as well, but that’s long-term for us.”

Wink Reports is one of a growing number of Australian tech startups based outside the major capital cities.

Far from being a disadvantage, Gromek said there a numerous benefits to launching a startup in a regional centre like Newcastle over a big city like Sydney.

“It’s really good. As opposed to Sydney, the cost of living is quite reasonable here. So in our early days, where we didn’t have a lot of money coming in and things were really tight, being in Newcastle was advantageous because it doesn’t cost anywhere near as much to live here,” he said.

“At the same time, you still have the benefits of a city. There’s a decent economy and business network here of professionals you can lean on when you need them.”

One of Newcastle’s biggest strengths is that it has a vibrant local startup ecosystem.

Gromek notes that Wink Reports is self-sufficient in terms of funding and able to support itself from revenue, meaning it didn’t need to participate in an incubator or accelerator program.

However, having regular local meetups and events allows him to exchange ideas, seek out advice and gain inspiration from other tech entrepreneurs.

“One of the good things about Newcastle is that it’s really progressive and there’s a lot happening here in the startup space. It’s not uncommon to find meetups that are happening or hackathons, innovation weeks and things like that. It’s all pretty prevalent here,” he said.

“There’s a lot of coworking spaces and innovation hubs – one that immediately springs to mind is The Business Centre, which is in King Street in Newcastle – and there’s a lot of cohabitation.”

While many outside the city still think of it as being an industrial city, the city is fast becoming a hub for startups that use technology to solve environmental or clean energy challenges.

“There’s two areas [Newcastle is particularly strong in]. One is in greentech, and also in the smart city space around internet of things. Newcastle is pretty big on renewable energy and also on traffic flow and people flow around the city. They’re pretty prevalent and a lot is happening in those spaces,” Gromek said.

While strongly recommending a Star Wars themed café that recently opened, Gromek said the city is shedding its industrial roots and is developing a “Melbourne-like” vibe.

“There’s a real coffee culture here now. Lots of chic cafes, restaurants and retailers. A lot of old spaces that haven’t been used in the city for 20 years are being opened up and being used for all sorts of artistic ventures,” he said.

“So it’s developing a real Melbourne-ish sort-of vibe. We even have ripped out heavy rail and there’s light rail going in, so from my perspective there’s a real Melbourne feel to what’s happening.”