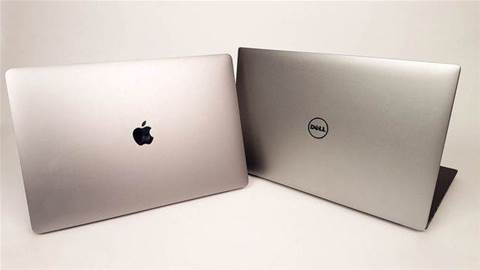 The latest version of the MacBook Pro and XPS 15 both carry Intel’s latest seventh-generation Core i7 processors. The Dell currently offers the quad-core 2.8GHz Core i7-7700HQ in all models, while Apple offers the same processor and two faster options: a 2.9GHz Core i7 (i7-7820HQ) and 3.1GHz Core i7 (i7-7920HQ).

Dell offers a bit more freedom than Apple with memory. Configurations are available with 8GB, 16GB or 32GB of RAM, whereas the MacBook Pro is locked at 16GB, which may be overkill for some people. The XPS 15 features Nvidia's GTX 1050M GPU with 4GB of GDDR5 memory, while Apple uses a Radeon Pro 555 or 560 (again, depending on the model) with 2GB of graphics memory. As with the processors, this is also upgradeable to a more powerful model at checkout.

As you'd expect, both devices are lightning-fast and racked up seriously impressive scores in our tests. They’re pretty much evenly-matched too; the MacBook Pro is around 10% faster in terms of multi-core performance, but that’s a minor variance and they’re neck-and-neck for single-core scores. For reference, the newer MacBook Pro is roughly 10% faster overall than its previous-generation predecessor.

One key differentiator between the two devices is the performance of the solid state drives. Dell has upgraded the XPS 15’s drives, and its SSD clocked up sequential read and write speeds of 1.3GB/s and 457MB/s in our tests. These are highly respectable scores, and an immense improvement over the previous generation. They're dwarfed, however, by the MacBook Pro's frankly staggering result of 3.1GB/s and 1.4GB/s. This is jaw-droppingly fast, and ensures that long loading times and file transfers should be a distant memory.

One other thing to bear in mind, though, is that Apple's machines are notoriously difficult to service and upgrade. If you want to swap out or fix any components of the MacBook Pro, chances are you're looking at a trip to the Apple store, which can be costly and time-consuming. Dell have made it much easier to get inside the XPS; all you'll need is a screwdriver to open it up and get at the hardware (watch the warranty though).

It's here that the XPS gets a serious advantage. While Apple has taken the decision to go all-in on Thunderbolt 3 ports, the Dell XPS retains a pleasingly wide variety of inputs, including an SD card reader, an HDMI output, two USB 3.0 slots with powershare and a Thunderbolt 3 port. 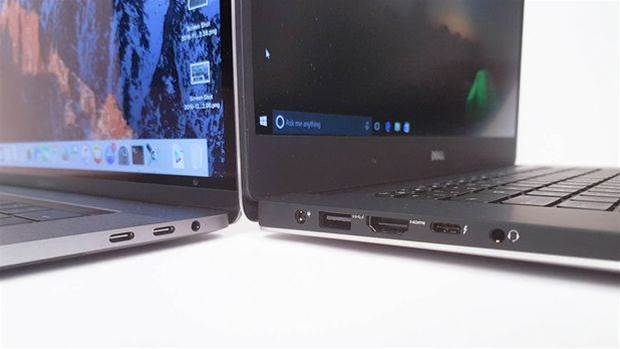 This puts the XPS squarely ahead when it comes to business use-cases, especially when it comes to hot-desking or mobile working. Rather than having to shell out on new monitors, docking stations and peripherals, CIOs can outfit their workforces with XPS units safe in the knowledge that all their existing equipment will integrate with no issues.

That's not to say that Apple's choice to go Thunderbolt-only isn't without merit, however. Because Thunderbolt can handle both power and data transfer, connecting all your desk equipment to a dock means that you only need to use one cable to connect to the MacBook itself, making it much easier to rapidly switch between desk-based and mobile work.

However, the XPS wins here, for its versatility and convenience. We've had a couple of issues with the MacBook's lack of ports, such as being away from our dock and needing to retrieve some data from a flash drive – a simple task rendered infuriatingly difficult by its Thunderbolt-only configuration.

Apple products have always come at a premium, and so far that hasn't impacted their rising profile as business-grade hardware. In this case, however, the MacBook Pro is just too expensive. 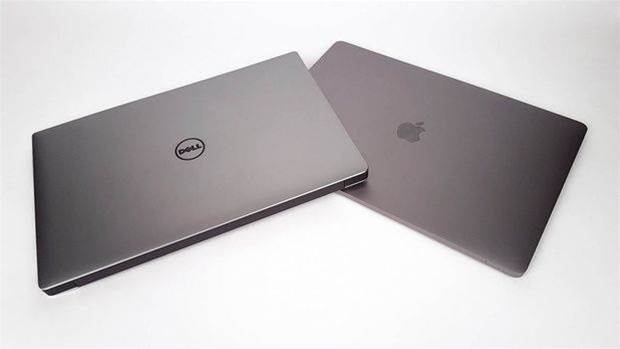 The MacBook Pro is, by virtually every metric you could imagine, a near-perfect laptop. It's lightweight, attractive and it goes like a bat out of hell. It has a number of key advantages over the XPS 15 – a much better display and trackpad, for example, and a lighter, more streamlined chassis.

However, those advantages aren’t enough to offset its huge price premium. Fleet pricing for businesses will likely deliver some savings, of course, but the cost differential across multiple laptops will still be very substantial.

If you've got several thousands of dollars burning a hole in your IT budget, by all means go for the new MacBook Pro. For anyone that's looking for good value, the Dell XPS 15 is still the ultrabook to beat. And it is, after all, a very quick, very versatile, very usable laptop.

This comparison is based on an article that originally appeared at IT Pro.