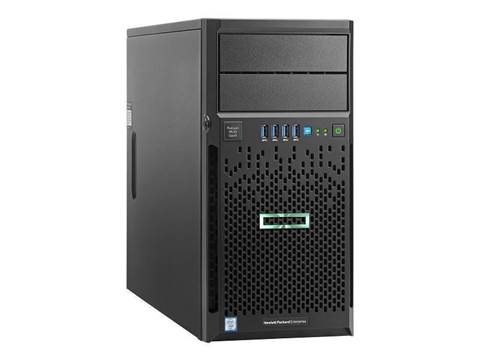 Looking to buy your first server or upgrade from an aging model? Our guide will help you get started.

Sure, you could shift all your files and applications to the cloud, but there are good reasons why you might want to keep your systems on-site. If you do so, however, it makes sense to centralise your business files on a server to make them easier to back up and share among colleagues and staff.

Of course, a network attached storage (NAS) appliance is another option for centralising files. However, servers are more flexible and can also be used to run applications that need to be accessed by the entire office – such as email, intranet or a database. Servers are also more powerful than NAS appliances, making them more suitable business-critical software.

In this roundup, we’ve reviewed five entry-level servers for small businesses buying their first server or looking to upgrade from an aging model. It’s an ideal time too, with the recent rollout of refreshed server ranges that feature Intel’s latest-generation Xeon v6 processors.

But first, here’s a server buyer’s guide explaining the specifications and features to consider for those just starting out.

Most servers are sizeable towers to allow plenty of room for expansion, but they don’t have to be. HPE’s tiny ProLiant MicroServer Gen10 still manages to fit in four LFF bays.

The next thing to consider is the interface for connecting the hard drives to the motherboard. For many small businesses, the standard SATA (Serial Advanced Technology Attachment) interface used in most computers is fine.

However, if high-end performance is a priority you might want to consider a SAS (Serial Attached Small Computer System Interface) interface. Entry-level servers typically offer a SATA interface, with an option to upgrade to SAS with an add-in PCI Express card.

The latest SAS3 standard offers a maximum bandwidth of 12 gigabits per second, compared to SATA3’s 6Gbs. Also, SATA hard disk drives in servers typically run at 7,200 revolutions per minute, whereas SAS drives are generally either 10,000rpm or 15,000rpm (these specs are often shortened to 7.2K, 10K and 15K).

Installing solid state drives (SSDs) for even better performance is also an option in many servers or you can often have both. For example, a setup with an SSD for the operating system and standard HDDs for files is often seen as a good compromise between performance and cost.

And finally, note that servers are sometimes sold without hard drives for those who prefer to do their own installation – so make sure you compare like with like when looking at pricing.

RAID (Redundant Array of Independent Disks) is a must for servers with multiple drives to make best use of the drives. There are various RAID types, including:

If you want to use different types of drives, some devices support JBOD (short for Just a Bunch Of Disks), which technically isn’t RAID but can combine a variety of disks into one big volume – though there’s with no redundancy, so the failure of one drive is likely to result in the loss of all data.

Many entry-level servers often offer embedded RAID with limited options – typically 0, 1 and 10 – but offer an option to upgrade to a RAID controller with more options.

‘Cold-swap’ is server-speak for the setup in most computers, where you have to power down the system to add or replace a hard drive. Hot-plug means you can add (but not replace) a drive without restarting the server, while hot-swap means that if there’s a hard drive failure, you can replace that drive while the system is running.

Hot-swap drives are used in conjunction with a RAID setup that enables redundancy – so no data is lost if there’s a failure.

Most entry-level servers are cold-swap.

You’ll find entry-level servers with mainstream processors, such an Intel Core i3 or i5, and they will be fine for many small businesses with basic needs. However, business-grade processors, such an Intel Xeon, generally offer better multi-threaded performance and reliability than equivalent mainstream chips, making them more suitable for servers.

Look for v6 Xeons – the latest-generation (Kaby Lake) processors with improved performance and efficiency – though you may be still find v5 Xeon servers available. There are various Xeon families, with E3 chips typically used in entry-level servers, ranging up to E7 processors for the high-end.

AMD also offers business-grade processors with its Opteron families, ranging from the entry-level 3000 series to the 6000 series.

RAM typically ranges from 8GB to 64GB in entry-level servers. Note that memory modules come in different types and speeds, which are dependent upon the processor and motherboard. For example, 2,400MHz ECC DDR4 memory is the standard for most entry-level Xeon-based servers. But really, memory speed is generally far less important than other performance factors, such as the processor itself and the drives.

In servers, internal PCI Express (PCIe) slots are useful for add-in cards for extra features such as support for SAS drives or more RAID options. USB ports can be used for external devices, of course, and you’ll want USB 3.0 where speed is imperative – for backup drives, for example.

Internal 5.25in bays may be also worth be worth having for installing a DVD-RW or backup drive.

Servers are typically sold without an OS – you’re expected to buy your own licence – but they usually support a range of operating systems, including Windows Server and various flavours of Linux.

So, which server is right for your business? There are plenty of good options – and we strongly recommend doing your own homework too – but here are reviews of five of the better servers available to get you started: